How Does The Moon Affect Human Beings?

Cutting-edge medical research is exploring the effect of the Moon on human beings, their sleep, mood, and mental health. Dr. Horacio de la Iglesia, a leading researcher in this field, discusses the implications and gets a Yogic perspective from Sadhguru. Dr. Horacio de la Iglesia is a research associate and Professor of Biology at the University of Washington. The conversation is anchored by Dr. David Vago, who is a Professor of Psychology at Vanderbilt University and a research associate at Brigham and Women’s Hospital, Harvard Medical School.

Dr. David Vago: Dr. Horacio recently wrote a research paper about the synchronization of human sleep with the Moon cycle under different conditions. Could you tell us more about that?

Dr. Horacio: There have been some studies from sleep laboratories in which they have found an effect of the lunar cycle on the electroencephalographic recordings of sleep. Our research tried to answer the question of whether sleep was modulated by Moon phases at the individual level. And in fact, we found that it did.

The Effect of the Moon On Human Beings

Dr. David Vago: Is there something related to the mass of the two objects that is causing a change in human physiology?

Dr. Horacio: It turns out that every fifteen days, around the time of full moon and new moon, ocean tides are maximally high and maximally low because the Sun, the Moon, and the Earth are aligned on the same axis on those days. The gravitational pull of the Sun and the Moon are added, and you experience maximally high daily tides. But so far there is no evidence that humans can detect those changes in gravity. On the other hand, we do not have any other way to explain why, in a place where you have no ability to sense the moonlight, you can still respond to the cycle of the Moon, which we found in our research.

Does the Moon Affect Our Sleep?

Dr. Horacio: What is interesting is that on the nights leading to the full moon, sleep starts later and is shorter. The shortest sleep duration takes place three to five days before the full moon. Those are the nights in which moonlight is available at the end of the day, in the late evening and early night. And if you think about the utility of moonlight, in terms of our ancestors that were hunter-gatherers, it’s much more useful to extend the daytime activity with the moonlight than wake up in the middle of the night by the effect of the moonlight.

This neurological development is the most significant aspect of who we are. And how stimulated, active, and balanced our neurological system is, is directly related to the phases of the Moon.

In other words, if the moonlight comes out at 3:00 a.m., you are probably already fast asleep, and you will not respond to it; it will not wake you up. However, if you are planning to go to bed around 8:00 p.m. in the evening, and you suddenly see this bright source of light, you may actually stay up and continue whatever you are doing. And that is exactly what we do nowadays with our artificial light – we typically use it to extend the evening activity.

We think that, in a way, artificial light has tapped into this ancestral effect of the moon on our sleep. But going back to your question of gravity, the only explanation that we have so far is that probably, this perception of gravity makes you more sensitive to the effect of evening light or of keeping you awake.

Dr. David Vago: But the data is not clear, right?

Dr. Horacio: No. So far, there is no physiological data to show that humans respond to these gravity changes.

Sun and Moon in Yoga

Dr. David Vago: Sadhguru, maybe you could provide some light from the Yogic perspective. Clearly there is a large history of descriptions of how the Moon can influence our physiology, but there is no evidence from modern science to show specifically how the forces that brings two masses together can influence how our body and mind function.

Get weekly updates on the latest blogs via newsletters right in your mailbox.
Sadhguru: If you look at it from the Yogic perspective, one important arm of Yoga is called Hatha Yoga. Ha means the Sun, Tha means the Moon. Hatha means to bring balance between these two forces. The Sun, the Moon, and the Earth have a significant influence on the making of life on this planet. The male population may be confused about it, but the female population has always been in sync with the cycles of the Moon, and that is the basis of our birth right now.

We do not see the Moon as only having a gravitational impact on us. We see the Moon as the basic element that holds the Earth in its trajectory of revolution around the Sun. Today, modern sciences are confirming that the Moon as a satellite is moving away from the Earth every year. When it moves beyond a certain point, its impact on the life on this planet will recede. Human reproductive cycles will go off the normal cycle, and human beings will slowly go away. But above all, if the Moon goes away, which it is supposed to after a few billion years, the Earth cannot hold its track, and it will break into pieces. This is how the Yogic system looks at it.

Are the Phases of the Moon Relevant for Yogic Practices?

Sadhguru: India largely uses the Hindu calendar. In some parts of the country where there is matriarchy, they use the lunar calendar. And wherever there is patriarchy, they use a luni-solar calendar, which is a combination of lunar and solar cycles. We are not looking at the calendar as just a numerical record of things, but in terms of how we experience it within ourselves, and how the body responds to it at different times.

If you are meditative, you will become more meditative. If you have a mental illness, that will also get enhanced. Whatever your quality is, gets enhanced because of the full moon.

Accordingly, various traditions, practices, and rituals were crafted so that you can make best use of the Earth’s energy, trajectory, the direction its northern face pointed towards, and its closeness to the Sun. All these aspects are taken into account for the sort of practices you do.

One solar cycle is thought to be 4356 days, and this cycle is segmented in different ways for different people. It is different for Yogis, ascetics, householders, and other people who are into regular worldly life because their bodies are attuned in different ways, and they need to function differently. The calendar is based upon the Moon phases and the planet’s position in relation to the Sun. So, what impact does the Moon have on a daily basis? It is not just the moonlight – today, people are talking in scientific terms about electrical charges, electromagnetic impact, and other aspects. I am not an expert in that, but in the Yogic system, we give a lot of significance to full moon and new moon days. On those days, there are different types of practices we do.

Ascetics usually do practices on new moon days, while people in the family way of life do practices during full moon days because the impact is very different. We created a variety of devices at one time – for example, to expose your spine in a particular way to the Moon on a full moon night. Three full moon nights like that could completely reorganize your system from ill-health to health.

Does The Moon Affect Your Mood? 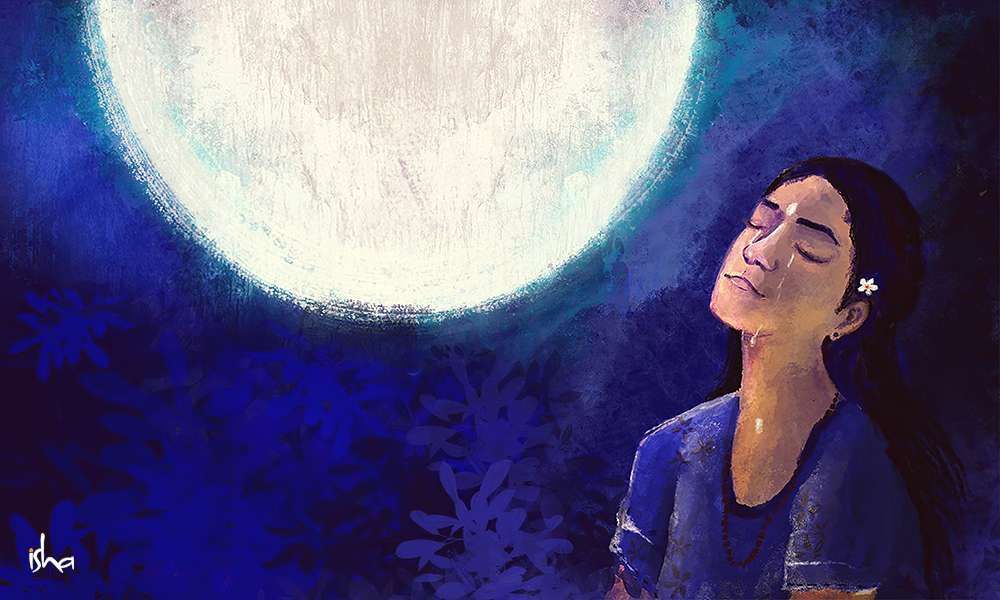 Sadhguru: In the mystical world, human perception and the Moon are directly connected. Adiyogi, the first Yogi, wears a crescent Moon upon his head like a jewel. This is to indicate that he is at the highest level of perception. In medical terms, we may see it as a certain level of neurological stimulus. In the evolutionary process of life, we are not the strongest creature on this planet, but we have the most complex and sophisticated neurological system. That is what really renders us on top of the pile.

This neurological development is the most significant aspect of who we are. And how stimulated, active, and balanced our neurological system is, is directly related to the phases of the Moon. There are many ways in which people can make use of it to handle their mental fluctuations. Many human beings go into tides within their system because the whole oceans are going up. Around sixty percent of our body is water, so there is fluctuation in the system.

Editor's Note: For people on the spiritual path, full moon nights are conducive for meditation as nature gives you a free ride of energy. Sadhguru is offering an online, monthly full moon Satsang, opening a doorway to seekers across the globe to imbibe the spiritual possibilities of a full moon night. Register for Full Moon Flirtations for free.

Moon
Emotions
Sleep
Mental Health
Yoga
Body
Hatha Yoga (Program)
Wisdom
Related Content
article
Mystic Moon
Why is it that the mystical and the moon have always been intimately connected? Sadhguru explains the significance and the role that the moon plays in our lives.
Dec 27, 2012
article
Horoscopes or Horror-scopes?
Sadhguru looks at whether there is anything to horoscopes and whether the planets can influence our lives.
Aug 31, 2015
article
The Moon and Mysticism
Sadhguru traverses the landscape of the logical, cultural, intuitive and perceptive aspects of moon and its mysticism.
Nov 7, 2011
Close