Ganapathi is well known for his cleverness. At the Gokarna Mahabaleshwar temple, there is an idol of Ganapathi with a dent in his head, courtesy Ravana, who wasn’t very appreciative of Ganapathi’s intelligence on one occasion. Sadhguru tells us the story of this encounter.

ArticleSep 16, 2015
Sadhguru: Ravana was a great devotee of Shiva and he worshipped Shiva from down South where his kingdom was. But after sometime he thought, “Why don’t I bring Kailash closer to my home.” So he walked all the way from Sri Lanka to Kailash and started lifting Mount Kailash. This made Parvathi very angry and she told Shiva, “It does not matter how dear he is to you, you cannot allow him to take Kailash to the South.” Shiva was also angered by Ravana’s egoistic nature and so, he pressed the mountain down trapping Ravana’s hands beneath Kailash. Ravana struggled in pain but Shiva refused to release him.
Ravana did a very powerful sadhana and received a powerful Jyotirlinga from Shiva himself.

So, Ravana with his hand stuck beneath Kailash, started pouring out his love for Shiva in various beautiful hymns. After he had formed 1001 hymns of utter love and surrender, Shiva released him and said, “You can have a boon. Ask me what you want.” Once again Ravana’s nature manifested itself and he said, “I want to marry Parvathi.” Shiva said “Ok.  She is at Manasarovar Lake. You can go and marry her.” All the ganas who were around Shiva got excited and wondered, “How can it be? How can Ravana ever touch Parvathi? This is not possible.” They all ran to Parvathi at Manasarovar Lake and told her, “Ravana is coming. Shiva has given him permission to marry you.”

Parvathi called Manduka, the queen of the frogs, and converted this frog into a beautiful woman. Ravana had never set eyes on Parvathi and when he came and saw the woman Manduka, he was so attracted to her, he married her. That woman was Mandodhari.

After this, Ravana did a very powerful sadhana and received a powerful Jyotirlinga from Shiva himself. Shiva does not care whether something is socially approved of or not. He falls in love with anything that happens genuinely. Shiva told Ravana to carry the Jyotirlinga to his land and that wherever Ravana placed the Jyotirlinga, it would remain forever. The one condition was that Ravana could not keep the Jyotirlinga down anywhere else because wherever he put it, it would get established there.

Very carefully, Ravana carried the Jyotirlinga with great strength. The man was such a yogi that he held every aspect – he did not eat, he did not urinate, he did nothing that is compulsive for every human being and just walked down almost 3000 kilometers from Kailash to a place called Gokarna in Karnataka. Because he walked without anything that a human being normally needs, he was feeling weak and he wanted to pee. Maybe he was drinking water because he was not having any food. His bladder must have been a thousand gallons by then and he could not hold it anymore! But he could not keep the linga down and he would not relieve himself – something that he considers a very base act – with the linga on his body.

Then he saw a very cute and innocent looking cowherd boy. The boy looked dull enough. If you give someone who is smart something very precious, they may run away. The boy looked dumb enough, so Ravana said, “I will give you a jewel if you hold this in your hand for a few minutes while I relieve myself. But don’t put it down.” The boy said, “Fine” and Ravana gave the linga to the cowherd and turned around to urinate. This boy was actually Ganapathi who did not want Ravana to take the linga to Lanka because if he did, he would become absolutely superhuman. So Ganapathi just kept the linga down and it sank into the earth. Even today if you go to Gokarna, there is just a small hole in the rock through which you have to put your finger and feel the linga because it has gone in. 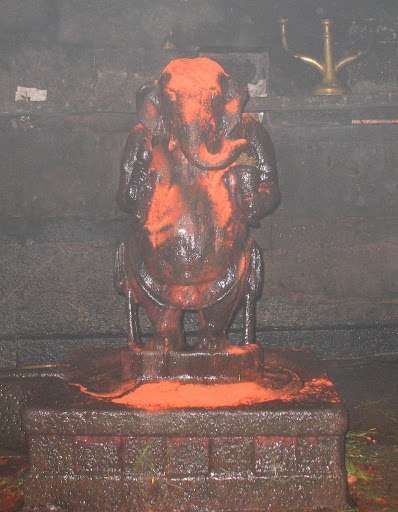 Ravana got so angry that he knocked the boy on the head and that is why you will also find a Ganapathi statue with a depression in his skull at Gokarna. Ravana did not have the strength to walk back to Kailash and do his work again and so in great dejection and anger he walked on to Sri Lanka.