The Fire Element – 4 Types of Agni

Sadhguru shares a deeper understanding on the most fascinating of the five elements – fire! He not only explores the different forms of fire within the human system and their effects, but also cultural and even cosmic dimensions of fire.

ArticleFeb 14, 2022
Sadhguru: In any society, just uttering the word “fire” loudly creates a lot of excitement. Fire is generally perceived as danger – which it is, if you do not handle it properly. Let us look at the elemental dimension of fire or agni – its manifestations, ways to conduct it, and above all, ways to master it. Though among the five elements, fire accounts for the smallest proportion in the composition of the human body, its influence is tremendous. In many ways, fire represents life. One major indicator for whether you are alive or dead is if the fire is still on in you, or if your body has gone cold. Life upon this planet is essentially solar-powered. The Sun is a huge ball of fire that fuels life on this planet. Any machine, while it works, invariably generates heat because fundamentally, fire is the fuel. You may call it electricity, petrol, wood, coal, or whatever else, but essentially, it is fire that lets any machine run, including your body. 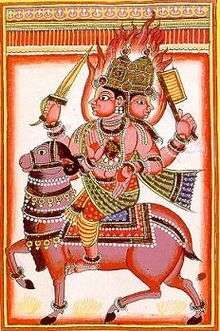 In this culture, the element of fire is personified as Agni Deva, a two-faced god who rides on a fiery ram. The two faces are symbolic representations of fire as a life giver and a life taker. Without the fire burning within us, there is no life. But if you do not take care, fire can quickly go out of control and consume everything. When it burns our body, it is called cremation. Another aspect is we are using fire to cook, so that we can consume foods that otherwise may not be edible or palatable for us.

There are many dimensions of fire, within and without. Let us look at the three forms of fire that burn within us. One is known as jatharagni. Jathara means stomach or digestive process. Without a little bit of fire in your belly, you cannot digest the food that you eat. Food is functioning as fuel that you need to break down in order to release the energy that you need. If the digestive fire is well-nourished and well-supplied with fuel, it also becomes reproductive fire. Both digestion and reproduction depend on jatharagni.

The second kind of inner fire is called chitagni. It is the dimension of the mind and beyond. Chitta is a dimension of intelligence within you that transcends the limitations of the physical form. Your physical form is an outcome of your genetic and your karmic memory. By contrast, chitta is a dimension of intelligence that is untainted by memory. The fire of intelligence can manifest on many different levels, the first level of manifestation being the intellect. If we look at the different fires within you, only if your digestive fire is going well, the reproductive fire will come into the act. If you are not well-fed, the reproductive instincts will disappear. Similarly, if your chitagni is not reasonably fired, your intellect will become weak and ineffective. However, if your chitagni is fired up, it will manifest itself in the form of intellect – even if you are not in a state to consciously access other dimensions of intelligence. If your chitagni is burning bright, you will lose interest in food, sexuality, and other matters of the body. It is in this context that what is unfortunately being propagated as renunciation should actually be transcendence.

The boundaries of the body are very clear and limited. The boundaries of the mind are larger. For example, if you know something about another part of the world, it is within the boundaries of your mind. As your knowledge expands, your mental boundaries can expand. But if you become conscious of the dimension of bhutagni or the elemental fire, you will be a boundless being, because the play of elements is happening across the entire creation.

Generally, a Yogi who wants to access the nature of life will not interest himself in jatharagni, chitagni, and bhutagni. He will focus only on sarvagni, because this is the ultimate fire – but it is a cool fire. Jatharagni is a very obvious fire. Chitagni is less obvious but very much there. Bhutagni is not so visible at all but very much there. Sarvagni can hardly be felt, but without it, nothing would happen. It is the fundamental and ultimate fire that encompasses all other fires.

Fire is the element that is closest to akash or the ether. The akashic or etheric dimension becomes more accessible where there is fire – particularly if certain fuels are used. In southern India, we either use ghee or sesame oil for a lamp. If both are not available, then groundnut oil; if that is also not available, then coconut oil. These oil-based fires have a certain quality. They have a comparably higher smoke point than other fuels. That is why, if you look at the edge of the flame – you should not look into the flame – the etheric dimension is more available.

Whenever you want to create a conducive atmosphere, the first thing is to light an oil or ghee lamp. This is so much a part of Indian life. And the fuel for the lamp should be of a certain kind for maximum benefit. Candles generally do not have the same effect, especially when they are made of chemical wax. Essentially, what you are trying to do is make a fire with a material that creates a certain aura around itself, so that akash becomes available. With an oil lamp, you create an akashic field from which you and others in your home can benefit. Especially for children, pregnant women, sick people, and for health in general, it is vital to have an oil lamp burning in your home. Such a fire not only enhances your jatharagni for increased health and robustness of the body, but also the chitagni, and the availability of akash.

The Close Connection Between Fire Element and Akash

In this culture, everything of significance in people’s lives happened around fire. Without fire, there was no worship, no marriage, no significant event. Many different manifestations and ways of using fire got established in this culture, including sacrificial fires like homas and havanas. Fire makes akash or the ether more accessible. Of all the elements that we are made of, akash is the one that is most transparent and fluid. The earth in my body and your body is fundamentally the same, but in terms of what your body contains and what mine contains, it is distinctly separate. The water within you and within me is separate – you could say it is kept in different containers right now. But the air that we breathe cannot be separated. It is being exchanged all the time. The fire element of who we are is shared to an even larger extent. The akashic element is absolutely shared. We are all in the same akash. If you enhance the akashic element in any atmosphere, a certain bonding happens between human beings. Around a fire, togetherness and communication are greatly enhanced, because where there is fire, the element of akash becomes dominant. 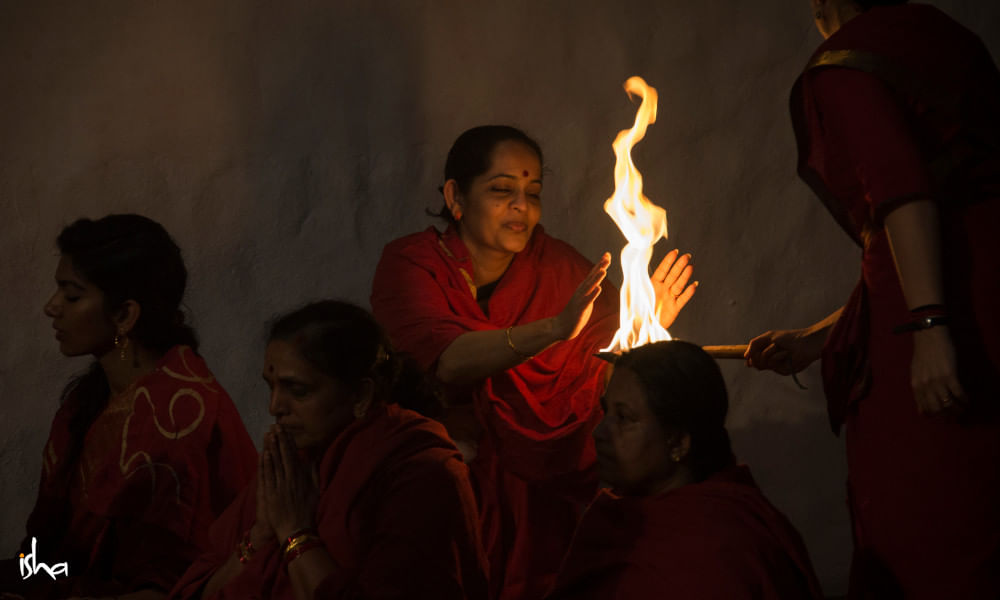 Questioner: In India, people do arati in front of a guru, a photo of a god, or an idol. Then they move their hands around the lamp and then touch their eyes or head with their hands. Why do they do this? Does something change in the fire after the arati?

Sadhguru: It is not that the fire changes, if a certain form is exuding certain energy and you do not know or you do not have the capability to simply connect with it and you want to connect with it, fire is a good medium to bring both of you together. As we have been saying, fire has been used in so many ways to bond. There is no wedding in India without fire because it is being used as a bond to bring people together.

Whether physical, emotional, or spiritual, without fire there is no union. Taking this further, if a certain form, either in the form of a picture or a deity is exuding certain energy, fire is a good means to make yourself available to it. You will see that if a few people go stand in Linga Bhairavi’s abode, they do arati with fire so that they can connect. It is not that she will not connect without fire – she will –, but it is done to make you conducive to it. The akash surrounding the fire which goes around the deity has acquired a quality of the Divine. So, when it comes to you, you do not put your hand into the fire; you take the akash around it and put it to your eyes, or the top of your head, or to your heart. You are trying to take some element of the Divine for your own benefit, to take it and make it a part of yourself. The whole arati process is an effort in this direction. These are all different things that can assist a person to slowly develop their own fire.

Fire in the Yogic Culture

Many temples were built for fire across the world. If you use very powerful reverberations in the form of mantras, the fire approximately takes that form and you will suddenly feel that there is a certain freedom and a release within you. In the Yogic system, there are various processes where no external fire is lit, but all the fires lit are within. This is what you hear from ancient times, that the Yogis were doing “tapas”. The word tapa means heat or fire. So, you are generating your own fire. External help is needed when internal possibilities are not so big, but if internal possibilities are created, no external help is needed.

Touching the Fire Element Within You

To sum it up: Although fire only forms a small part of you in terms of quantity, in terms of quality, it is very significant because of its unique nature. Your ability to touch fire is very minimal. At the same time, fire is the element to which you are most sensitive. Fire is a means to set the atmosphere to communicate, to create receptivity, to transcend limitations, and to touch another dimension that you can refer to as the Divine or God or whatever you want to call the source of creation.

Editor's Note:  Learn more about cleansing the five elements and how it can enhance your life in this comprehensive guide on Bhuta Shuddhi.
Agni-Deva Wiki

Five Elements
Creation
Body
Intelligence
Divine
Health
Wisdom
Related Content
article
Tips To Cleanse the Five Elements: Essential Bhuta Shuddhi
Sadhguru gives us tips to cleanse each of the five elements within us, which when practiced regularly, can lead to a sense of rejuvenation and wellbeing within.
Sep 23, 2015
article
What are the Five Elements or Pancha Bhutas?
Sadhguru offers an elaborate look into the five elements or Pancha Bhutas, and gives simple processes to purify and gain mastery over the five elements.
May 20, 2021
article
Lighting the Right Fire Within
Sadhguru speaks about the three kinds of fire or agnis, during the Mahabharat program at the Isha Yoga Center in 2012.
Apr 14, 2015
Close