Sadhguru throws light on Linga Bhairavi’s Third Eye, and how she can even have one if she does not have an Agna chakra – or does she? Read on to find out.

Questioner: Namaskaram, Sadhguru. You mentioned that Linga Bhairavi Devi is made up of three and half chakras – Muladhara, Swadishthana, Manipuraka, and half of Anahata. At the same time, one of the names we use to refer to her is Trinetrini, “the one with the Third Eye.” If the Third Eye is linked to the Agna chakra, then does Linga Bhairavi have an Agna chakra as well?

Sadhguru: The Third Eye does not have a physical location as you think. Because you have two eyes here, you assume the Third Eye has to be located somewhere in the middle. It is not like that. It is just that these two eyes can see only that which stops light. You can see an object only because it is stopping light. Suppose the object became such that light passes right through, if it was entirely transparent, you would not see it.
The depiction of Devi’s Third Eye is only a symbolism. It is just that because the Agna is connected with knowing, generally, the Third Eye is depicted as being between the other two eyes.

The moment you begin to see, experience, and perceive something that is beyond physical nature, then we say your Third Eye has opened. The depiction of Devi’s Third Eye is only a symbolism. It is just that because the Agna is connected with knowing, generally, the Third Eye is depicted as being between the other two eyes. But actually, it is not in any one place.

Suppose I go to some place and I notice some kind of energy, something happening there, the first thing I do is close my eyes, activate the fingers, and hold my left hand with the palm facing downward, just to see what is happening. Suppose you do not know whether something is hot or cold, you will also hold your palm over it to feel it. So does it mean your Third Eye is in your finger? Yes, at that moment, in a way. But the Third Eye has no physical location. It is not a physiological happening. It is a perception.

So, does Devi have a Third Eye? For sure. Is she three and a half chakras? Yes. 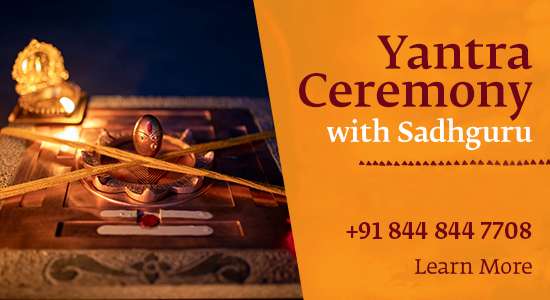 MysticismPerception
Related Content
article
6 Remarkable Stories of Agastya Muni’s Life
One of the Saptarishis and a direct disciple of Adiyogi Shiva, Agastya Muni was a being of tremendous proportions. His tireless efforts ensured that the spiritual process became widely available to the common person.
Dec 20, 2021
article
Bhairavi Sadhana – Significance and Benefits
Open to both men and women, Bhairavi Sadhana is an intense process to enhance one’s receptivity to Linga Bhairavi’s grace. Sadhguru explains the significance of this sadhana and the benefits one can reap from it.
Dec 11, 2021
article
Agastya Muni - The Father of Southern India’s Mysticism
Find out why Agastya Muni was known as the father of Southern India’s mysticism, and what his efforts to spread the spiritual process have to do with Sadhguru.
Nov 22, 2021
Close