Adiyogi, Saptarishis and the 7 Dimensions of Yoga

Why did Adiyogi transmit only one of seven aspects of yoga to each of the Saptarishis? Sadhguru discusses the time-consuming work of strengthening the energy body.

On July 27, celebrate Guru Purnima With Sadhguru, in the Presence of Adiyogi. Join in person at the Isha Yoga Center or watch the free live webstream.

Q: Sadhguru, you mentioned that Adiyogi transmitted one each of the seven aspects of yoga to the Saptarishis. Why is it that each of the Saptarishis was unable to receive all of Adiyogi’s knowing? Is there a limit to what a normal human body can contain?

Sadhguru: There are many aspects to this. The human body, as we know it, has many layers or dimensions attached to it. We have spoken about the 114 chakras several times. These 114 chakras, in a fully blossomed body, are 114 possibilities. But even if only 21 chakras are active, a person can still live a full-fledged physical life. Everything will be fine with you. Your body and brain will function well and you will be reasonably successful. If a few more chakras are active, suddenly that person is outstanding in some way. If many more are active, that person will seem extraordinary.

So in this sense, there is still a whole range left unexplored by the average human being. If you look at it in terms of experience and exploratory possibilities, where an average human being is, is less than one percent. Ninety-nine percent plus is still to be explored.

Adiyogi must have found limitations in the time-consuming process of preparing a physical body. I am not referring to physical strength.

Adiyogi must have found limitations in the time-consuming process of preparing a physical body. I am not referring to physical strength. To develop the energy body to a certain level of strength and vibrancy takes a certain amount of time. In many ways, the present generation is the weakest generation ever. Not just in terms of muscles – we are weaker than any generation because of lack of physical work – but even in the form of energy bodies, we are the weakest generation. You have to wait for months before you can make people do something worthwhile within themselves. Otherwise they will lose their balance and fall apart. In the last five to six generations, we have slowly moved away from the elements in nature into more protected atmospheres. Because of this, the energy body has become very fragile and weak.

I am sure Adiyogi had better bodies around him but still he must have found it easier to work this way.

I am sure Adiyogi had better bodies around him but still he must have found it easier to work this way. Each one trained in one dimension, then they went out and spread it. It is his judgment. It is not for me to question. I am sure he did the best that was possible then.

These seven Saptarishis, when they were just about to leave to different parts of the world to spread the knowing Adiyogi had poured into them, at that time, in a most uncharacteristic way, Adiyogi said, “Where is the Guru Dakshina? Where is the fees?” They were flabbergasted, “Fees! You are our life. What do we have to give?” They had been with him and all they had was the loincloth they were wearing. What is there to give? And it was most uncharacteristic – they could not believe Adiyogi was asking for a fee!

They had been with him for many decades, which felt like millennia. They knew nothing else apart from him.

Then Agastya Muni, who was the most diminutive in physical stature, got the point. He said, “The only thing that I have with me, which is precious” – because if you have to offer something to your guru, you must offer that which is most precious to you – “This body means nothing to me, otherwise I would have offered it to you. The only thing that is truly precious to me is the knowledge that I acquired from you in these many years. Here, these sixteen dimensions of knowledge that you have offered to me, this is my offering to you.” He placed it at his feet. Taking the cue, one by one, all the other six did the same. Then Adiyogi said, “By all means, please proceed on your journey.”

They had been with him for many decades, which felt like millennia. They knew nothing else apart from him. And now, whatever they had learnt painstakingly, over many years, they offered it to him and they walked empty-handed. 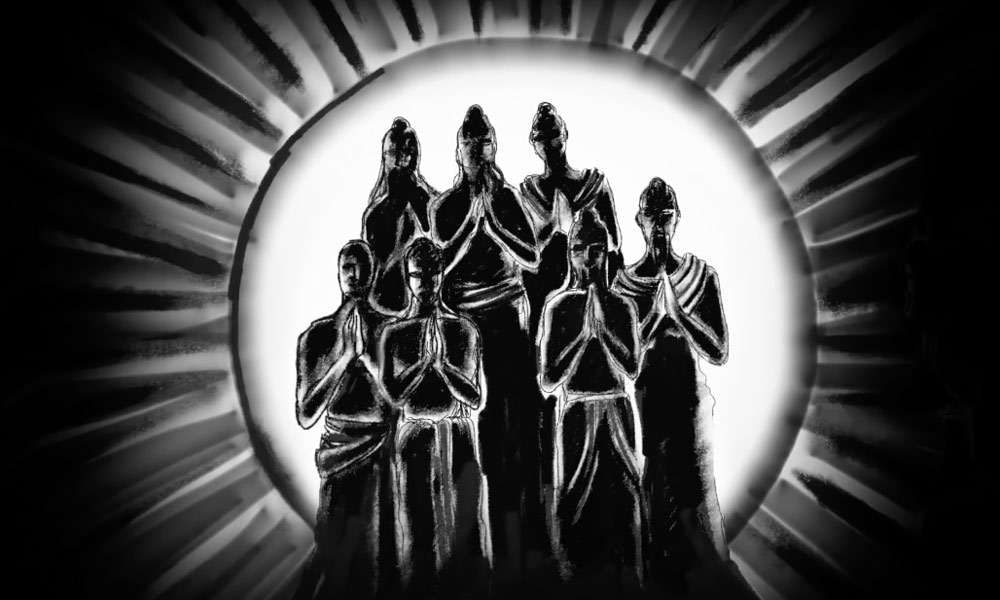 Because they walked empty-handed, all the 112 ways became present in every one of them through his presence. He became alive in them. Otherwise they would just be 16. They became infinite because what they had acquired very painstakingly for many years, they put it at his feet and walked away empty-handed.

Editor’s Note: On July 27, celebrate Guru Purnima With Sadhguru, in the Presence of Adiyogi. Join in person at the Isha Yoga Center or watch the free live webstream.

Guru
Yoga
Adiyogi
Related Content
article
Classical Yoga: An Introduction to the Origin of Yoga
Through vivid stories narrated by Sadhguru, we take a look at the being who introduced yoga to humankind, the Adiyogi, the first yogi.
Mar 15, 2013
article
The Dimensions of Adiyogi: Sadhguru on Adiyogi at iii – Part 2
In the second of two parts, Sadhguru looks at the Adiyogi linga consecrated at Adiyogi: The Abode of Yoga on 23 September 2015 at the Isha Institute of Inner-sciences in Tennessee, USA.
Dec 23, 2015
article
Adiyogi – The First Yogi
In this story, Sadhguru takes us back to the very origins of the yogic science, and tells us about the first yogi and the first yoga “program”.
Oct 31, 2012
Close