Find out everything about horse gram, the miracle pulse. A traditional elixir for ailments like diabetes, heart disease, kidney stones, asthma, obesity, cold and many more, horse gram is highly protein-rich, high in calcium, low in fat and full of antioxidants. Here are 11 horse gram benefits that are sure to convince you to try it out. Plus, there is a recipe in here too!

You may be familiar with red, black and green grams, but even the most passionate foodies sometimes miss horse gram (Macrotyloma uniflorum). This low-profile, humble legume took its English name from its use as a staple food for horses and cattle. However, if you find the name discouraging, you can call it Kollu as it is in Tamil, Ulavalu in Telugu and Kulthi in Hindi.

Horse gram (Macrotyloma uniflorum) is a pulse crop widely cultivated and consumed in India since ancient times, and native to the south-east Asian subcontinent and tropical Africa. The US National Academy of Sciences has identified this legume as a potential food source for the future, thanks to its exceptional nutrition profile, drought-resistance and general hardiness.

What is Horse Gram?

Horse gram is the most protein-rich lentil found on the planet. It is very high-powered. That is why race horses are fed with this gram, which is called horse gram in the market.

This important and under-utilized tropical crop is grown mostly in dry agricultural lands and keeps a rather low profile nowadays, but is ready to expand its reputation! Here’s why. 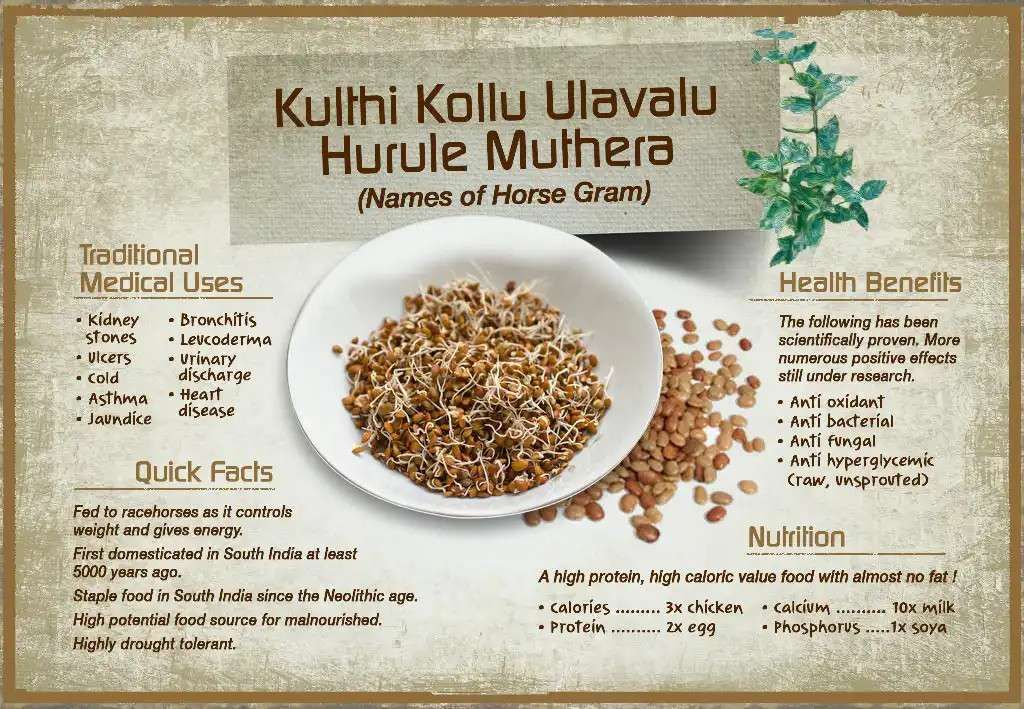 Scientists from the Indian Institute of Chemical Technology have found that unprocessed, raw horse gram seeds have the ability to reduce high blood sugar following a meal, by slowing down carbohydrate digestion and reducing insulin resistance by inhibiting protein-tyrosine phosphatase 1β. This makes it an extra diabetic-friendly food.

Horse gram seeds are rich in polyphenols, flavonoids and proteins – the major antioxidants present in fruits that makes them so healthy. In this article published in the Journal of Agricultural and Food Chemistry, researchers from the Department of Grain Science and Technology at the Central Food Technological Research Institute at Mysuru found abundant antioxidant activity in horse gram, in addition to reducing power and ferrous ion-chelating potency.

In Ayurveda, horse gram is a well-known diuretic and is reputed to be effective in increasing urine flow. For this purpose, horse gram can soup can be consumed twice a day for four weeks to show visible results.

Due to its diuretic properties, horse gram is very effective in assisting in the removal of kidney stones. In addition, making horse gram a part of your regular diet will aid in avoiding the formation of stones in the kidneys, as horse gram contains certain compounds that make these stones soluble.

Lipids in horse gram have been shown to have anti-ulcer activity due to the presence of phytosterol esters. Researchers from the Department of Surgery at Royal Free and University College Medical School, London found that horse gram is highly beneficial in healing peptic and mouth ulcers.

A common Ayurvedic prescription for asthmatic patients is to consume the paste of boiled horse gram and pepper, which aids in reducing cough, cold and congestion. Although not a cure for asthma, it has been known to provide immediate relief and help manage breathing problems.

According to established medical science, oxidative damage caused by free radicals plays a causative role in ageing and leads to diseases including several heart diseases. However, the human body is capable of minimizing this damage with the right nutrients and antioxidants. Raw horse gram is particularly rich in polyphenols, flavonoids and proteins, the major antioxidants. It is also low in fat and high in carbohydrate content, making it healthier for the heart.

Eating plenty of horse gram can actually help in the management of obesity as it has the ability to attack fatty tissue, thanks to its high phenol content. The effectiveness of horse gram is so well known in Tamil tradition that there is a Tamil saying, “Ellachavanukku Ella Kudu, Kozhuthavanakku Kolla Kudu,” which translates to, “For a frail person, sesame seeds and for an obese person, horse gram.”

#9 Keeps You Warm in Winter

Horse gram – especially in the form of soup – has the ability to generate heat and energy in the system and therefore keeps you warm on a cold winter day.

Horse gram is high in iron, calcium, and protein. In fact, horse gram has the highest calcium content among pulses and is one of the richest vegetarian sources of protein.

Horse gram contains iron in high levels, which helps to cure irregular menstrual cycles. It also increases your blood hemoglobin due to its high iron content.

Horse gram contains phytic acid which is an anti-nutrient – that means it can stop your body from absorbing all that nutrient goodness. But all is not lost because if you soak, sprout or cook horse gram seeds before putting them in your food, the phytic acid content is significantly reduced, according to research.

Here is what Sadhguru has to say about horse gram side effects: “Consuming horse gram generates heat in the body. You know that it is causing excessive heat when you notice that your eyeballs are hot or that you want to pee, your bladder is full but it does not come out and it hurts. That means there is excess heat. If such a thing happens, you just drink some ash gourd juice or take some castor oil and apply it either inside the navel or the Anahata, Vishuddhi, Agna and at two particular spots behind the ears. If you apply castor oil on these points, the system will cool down within five minutes. When you go to the bathroom, everything will happen without effort. You can also balance the excess heat by eating green gram. Sprouted green gram will cool the system.”

The Agricultural Relevance of Horse Gram

Drought Tolerant: Horse gram is remarkably tough and drought-resistant. It is capable of withstanding extended periods of drought with minimal work on the cultivator’s part. On dry lands with little access to technology or irrigation, horse gram is often the preferred crop. It is also grown in low fertility regions where other crop species may have failed. It is a great candidate for land reclamation programs.

All these factors combined make it a great cost-effective source of food, fodder, fuel supplement and manure.

Under-cover crop: We already mentioned horse gram is a low-profile legume and we had our reasons. It serves as a good understory crop in plantations in southern India. Because it requires relatively low levels of light, it can do its job hanging out quietly under the trees, and when it dies it enhances the quality of the soil.

Forage: Horse gram also provides animals with high quality forage. Its stalks and stems, which hold 30-40% of its nutrients, are widely used as animal feed. Kollu does not let any opportunity go waste.

So, horse gram takes care of you, Mother Earth, and animals too. Hopefully, this super hero has just found a place in your heart and will soon join your kitchen!

If you are wondering how to consume it, here are two suggestions. You can follow Sadhguru’s advice and instructions and sprout the seeds, or try the yummy soup if you feel like having a hot dish.

Sadhguru: Many stomachs may not be able to digest horse gram so it is good to sprout it, which makes it more easily digestible. Put the horse gram in a white cloth, soak the cloth in water for about six to eight hours, and then keep it closed. In about three days, the seeds will sprout. If the sprout is about half an inch out of the seed, you can eat it raw. It takes a lot of chewing and eating, and it is very good for the system.

Let us know how you find horse gram, and how your attempts to befriend it have gone!

Editor's Note: The health benefits of natural foods are well documented and among the most consistent findings in nutrition science. Natural foods are not only good for you but can be quite delicious! At Isha Life, choose natural foods that promote good health, naturally.
Related Content
article
Foxtail Millets - Benefits, Nutrition and 6 Delicious Recipes
The health benefits of foxtail millet are numerous, including weight loss, diabetes management, and pregnancy support. It is high in vitamins and minerals, and has a nutty flavor which makes it a fabulous substitute for rice or wheat in various recipes.
Dec 25, 2022
Loading...
Loading...
article
Isha INSIGHT Day 3 – How to Make Things Happen!
From breaking down success stories to pondering over critical, nationwide issues, Day 3 of Isha INSIGHT was yet another day jam-packed with novel insights and riveting anecdotes.
Nov 28, 2022
Loading...
Loading...
article
Isha INSIGHT Day 2 – A Torrent of Insights
Four remarkable leaders, different industries — Day 2 of Isha INSIGHT was bursting with enrapturing discussion on a range of topics and standing ovations from participants.
Nov 26, 2022
Loading...
Loading...
Close