One of the Saptarishis and a direct disciple of Adiyogi Shiva, Agastya Muni was a being of tremendous proportions. His tireless efforts ensured that the spiritual process became widely available to the common person.

#1 How Agastya Muni Became the Father of Southern Indian Mysticism

Sadhguru: When Adiyogi transmitted his knowing, he explored and expounded 112 ways in which a human being can attain to his ultimate nature. When he saw the time that the Sapta Rishis – the seven disciples that he had – may take to grasp the 112 ways, he divided them into seven parts of sixteen each. Each one of them learned sixteen ways of reaching the ultimate. The lore says that it took them eighty-four years to learn this. In these eighty-four years, they stayed with Adiyogi and he was not just their teacher but slowly became their everything.

When they grasped these sixteen ways, and were beginning to bask in this knowledge, Adiyogi told them, “It's time to go.” They were completely overwhelmed by this, because they could not think of a life without him. But he said, “No, it's time to go. You have to go and share this with the rest of the world.”

When they were just about to leave, he said, “But what about the Guru dakshina?” It is not because the Guru needs the dakshina; it is just that the Guru wants them to leave with a sense of offering something precious because a human being is at his or her best in a state of offering. So, Adiyogi asked for Guru dakshina. These seven people were bewildered. What have they got that they can offer him? 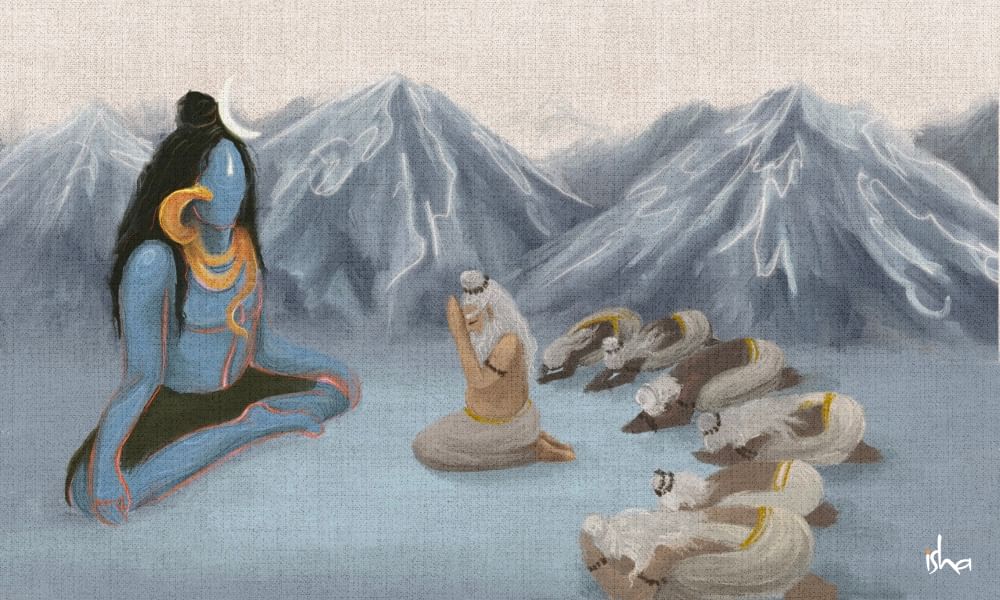 Then after a bit of confusion, Agastya muni took the cue and said, “The most precious things that I have in my life – something that is more precious to me than my life itself – is these sixteen dimensions of life that I received from my Guru. And here, I offer it to you.” Everything he had learnt in these many years, he offered back to Adiyogi. Taking the cue, everyone offered.

They spent eighty-four years of heartbreaking sadhana to earn this and when he asked for Guru dakshina, they put it back at his feet in a moment and stood there empty. Adiyogi said, “Time to go.” They left with nothing in their hands, and this was the greatest aspect of his teaching. Because they went empty, they became like Him. “Shi-va” means “that which is not.” They became that which is not. Because they became like this, all the 112 ways found expression through all the seven of them. Things that they never could grasp, things for which they had no capacity, things for which they did not have the needed intelligence – all that became a part of them because they simply offered whatever they had gathered, the most precious aspect of their life, back to him and went empty handed.

Kartikeya was Shiva’s son. He got very angry and wanted to go away from his father. He went down south in great anger and became a warrior. In many ways, he was an unmatched warrior who went about conquering. He did not conquer to rule. He went about slaughtering whatever he thought was unjust – because he felt his parents had been unjust to him, and he wanted to create justice. When you are angry, everything feels unjust. He felt there was so much injustice in the world, so he fought many battles and found a lot of people to slaughter.

It was Agastya who made Kartikeya’s anger into a means for enlightenment, and finally he found his rest in Subramanya. He washed his sword at Subramanya for the last time, settled down there for some time, and then moved up Kumara Parvat where he attained Mahasamadhi in a standing posture. This great art of transforming Kartikeya’s anger into a means for his enlightenment was Agastya’s work.

When Agastya was going down south, he met Vindhyachal. Vindhyas is a mountain range in India which is a much older than the Himalayas. Among the mountains, Himalaya was elected as the King of the mountains. So, when Agastya was going down south, Vindhyachal was angry and he stopped Agastya and said, “How can you make Himalaya the king? He is just a child compared to me.”

Now Agastya knew that when a man gets angry it can be pretty bad; when a mountain gets angry, we do not know what he will do. When Agastya sat down, because Vindhyachal was very devout, he bowed down to Agastya. So, Agastya said, “Just stay there. I will go down south and come back; then we will look at your issue.” So, Vindhyachal remained bowed down, waiting for Agastya to come back. Agastya never came back. Next time when he came north, he went the other way through Jagannath, Puri, just to avoid Vindhyachal, so that he remains subdued. Vindhyachal is small because he is bowed down. Himalaya is tall because he is standing up and still growing. 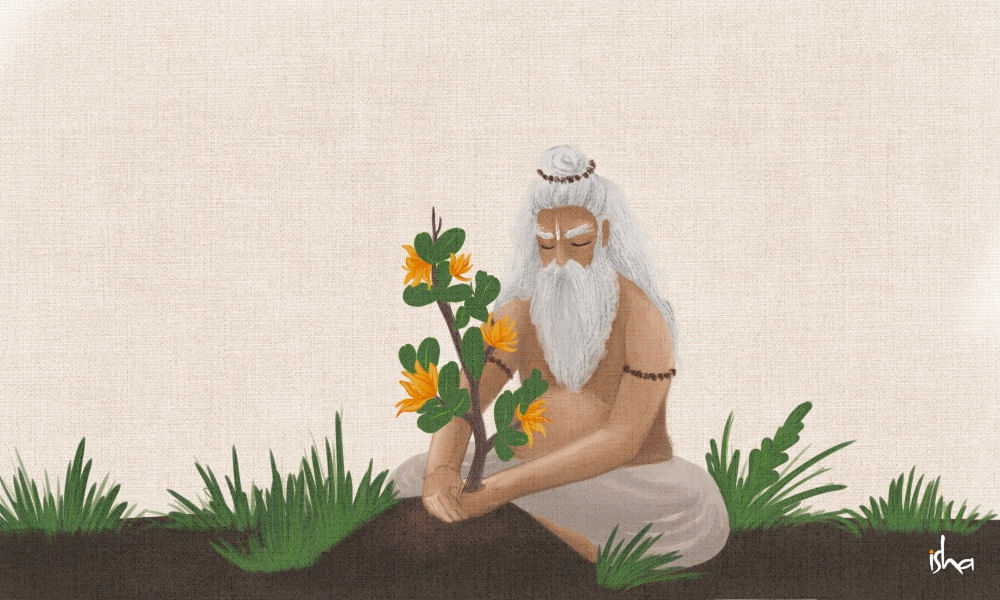 In BR Hills, or Belligiri Ranganabetta in Karnataka, there is a place where there is a sampige tree, also known as champa. It is a very fragrant flower. They say that this tree was planted by Agastya muni 6000 years ago. It is definitely incredibly old. It has become all knotted up, and looks much older than any tree of its kind. This tree is called “dodda sampige,” which means “big sampige.”

#5 The Spectacular Nattatreeshwarar Temple in Cauvery

The Nattatreeshwarar temple is a very wonderful temple located at the midpoint of Cauvery river. It is on an island in Cauvery exactly halfway along the river’s course from Talacauvery to the ocean, so it is seen as the navel of Cauvery. It is said that the linga at the temple was consecrated by Agastya muni over 6000 years ago. It is made of sand mixed with some traditional compound of those days. This sand linga is still physically intact, and in terms of the energy, it is explosive! Though it is 6000 years old, it feels like it was just consecrated yesterday.

It is generally believed that Agastya muni left his energies and his subtle body in this space. It is said that he left his mental body or manomayakosha at Chaturagiri Hills near Madurai, and with the help of Kartikeya, he is said to have taken his physical body to Kailash, where Shiva was, and left it there. That is a spectacular way of doing things.

In some way Agastya was looking at Cauvery as a living body and he established the navel center at Nattatreeshwarar in such a way that the upward and downward movement of energy happens in a proper way. The most significant aspect of the culture of this land is that human survival and prosperity were only a consequence, not the goal of life. The goal of life was always the blossoming of the human being. Many great beings invested energies in certain ways to support human growth and the blossoming of individual human beings. They created the necessary energy systems and tried to make everything into a possibility towards that – even a river!

Kashi is the holiest of holy cities and one of the most ancient cities of learning. This was a place where hundreds of enlightened beings lived at a time. Every street you walked, you had an enlightened being to meet. “Gupt” means secret.

So Guptakashi means a secret Kashi. No one is supposed to know about it. Guptakashi is of special significance to us because almost seventy-five years ago, the preparatory work for Dhyanalinga happened there. It is a very quaint temple, very beautiful in its own way.

This is an area where Agastya muni walked. It is either Agastya himself or someone like him who consecrated this linga. The nature of the linga is in line with Agastya’s way of doing things, which is pure kriya. No mantras, tantras, no other things – 100% energy work. That is the way I am. that is the only thing I know. I can just transform life from one dimension to another, simply on the basis of energy.

Editor's Note: Find out why Agastya Muni was known as the father of Southern Indian mysticism, and what his efforts to spread the spiritual process have to do with Sadhguru.

Great Beings
Shiva
Sacred Spaces
Energy
Devotion
Enlightenment
Wisdom
Related Content
article
Agastya Muni - The Father of Southern Indian Mysticism
Find out why Agastya Muni was known as the father of Southern Indian mysticism, and what his efforts to spread the spiritual process have to do with Sadhguru.
Nov 22, 2021
article
Velliangiri - A Mountain of a Temple
Sadhguru speaks about the Velliangiri Mountains, the Kailash of the South and of the reverberance that these peaks have absorbed from the innumerable sages and seers including the Adiyogi himself, who walked these hills.
Dec 10, 2015
article
The Dimensions of Adiyogi: Sadhguru on Adiyogi at iii – Part 2
In the second of two parts, Sadhguru looks at the Adiyogi linga consecrated at Adiyogi: The Abode of Yoga on 23 September 2015 at the Isha Institute of Inner-sciences in Tennessee, USA.
Dec 23, 2015
Close