Sadhguru explains the meaning of yantra,and how different types of powerful yantras can benefit and aid an individual in finding success, health and wellbeing.

What Is a Yantra?

Sadhguru: A yantra literally means a machine. A machine is a combination of very purposeful forms. If you make some forms very purposefully and assemble them together – ten gear wheels for instance – it becomes a machine. A yantra is a form, simple or complex, towards a certain purpose. A combination of yantras becomes a larger yantra – a larger machine.

If you look at the human form, it is a phenomenal machine - the most sophisticated machine on the planet. Yet, as children, we have all wanted a bicycle, which is a much simpler machine than a human being. Why? A human being’s two legs are great mobility-wise, but to go faster than that, we need an additional yantra. So as kids, a bicycle was the thing, and we thought that with a bicycle, life was made. That yantra, the bicycle, created such a phenomenal impact. Later on, we saw somebody driving around on a Yamaha motorbike and suddenly that was the yantra to have. And still later, somebody rode past you in a Mercedes car. Suddenly, you wanted that yantra.

Similarly, we have yantras which enhance our "mental-scape" too. A computer is a product of our minds, but still, if we are asked to multiply 1736 with 13,343, we reach for a calculator – a yantra. Everything that the calculator has, the mind has. It is not that the calculation is not possible in the mind. It is, but this purposeful form or yantra allows us to use our body in a much better way; a yantra allows us to enhance the physical body we have. A machine is useless without the human being. It only enhances the human being. Even though you already have the body – a phenomenal yantra – with you, as your aspirations and activities increase and go beyond a certain scope, you will go on adding more and more yantras. This is because it is possible to perform different types of activities better with specific machines for those activities.

That is how it is with the Linga Bhairavi Yantra. This is another kind of yantra or machine. Yantras can be of a physical form or energy form; both may function a little differently, but they do function towards the same goal.

The Linga Bhairavi Yantra is designed and structured in such a way that it enhances certain dimensions of your life. It has a certain kind of impact on your system, on the space in which you live, and upon the direction and destiny of your life.

In earlier times, the process of building temples was fundamentally to create powerful yantras for everyone. Temples were powerful yantras that the whole town could benefit from. The Pancha Bhuta temples, the five major temples that were built in southern India, were not for any god but for the five elements of nature: earth, fire, air, water, and space. These temples were positioned in such a way that the most significant temple, the base temple was on the magnetic equator – not the geographic equator, but the magnetic equator that passed through Tamil Nadu. The other four temples were built in proper alignment to the base temple so that the whole region benefited from this magnificent yantra.

Creating such yantras was the basic aspect of this culture. In every town, first a temple – a phenomenal yantra – was built. Those who built these temples might have lived in huts themselves, but it did not matter to them because they knew that as long as they made this yantra work, their life would be good.Maintaining public yantras for everyone has become more and more difficult in today’s world, so more private things were created. The Linga Bhairavi Yantra is one such thing. It is a very powerful, personalized tool in the sense that it creates a certain space and an atmosphere in your home so that your wellbeing is naturally taken care of.

One of the main things that does not allow a human being to find his full potential is friction. Friction need not necessarily mean that you get into a fight with someone. But when you try to be active in a big way, it builds up around you. How low friction levels are kept determines how far you will endure. If friction increases, you will want to stay away from activity or you will get into one big mess. It does not matter how important a certain goal is for you, if friction happens every day when you step out and try to do something, you will slowly develop an aversion to that very dear goal of yours. I would say 80% of human beings have hugely curtailed the possibility of what they could do in their life simply because they cannot deal with the friction they naturally generate when they get into brisk activity. It is not a very smart way to deal with it because instead of bringing lubrication, you are keeping the engine off.

We have created the Bhairavi Yantra for those who want to lubricate their actions with the Grace of the Devi so that you can take up things and not get into friction. Her Grace will take care of that.

Question: Linga Bhairavi offers two yantras. You spoke about the Bhairavi Yantra. How is the other one – the Avighna Yantra – different?

Sadhguru: Essentially it is just one. The other one is just a question of size. We estimated that if the homes are anywhere between 2000-2500 sq. ft., the Bhairavi Yantra would do. For homes larger than that, we said this is not enough and we offered the Avighna. Avighna also has a slightly more business-like attitude towards it, more for success and prosperity. Whatever a human being is trying to do, there are always various obstacles. Whether one is able to cross the obstacles or not is the measure of success that one has in one’s life. Avighna Yantra is designed to bulldoze the obstacles in one’s life. It is a certain form that takes the obstacles away. Of course, those who want to make use of it for spiritual processes can always do that. That is always the basic element. The idea is to create assistance for people in whatever they want to do. So the Avighna is for a variety of things. There is a basic spiritual element but if you do not care about spirituality and you just want to make money, the yantra will lubricate your engine. Where you want to drive your car is up to you.

Question: Traditional yantras often have the symbol of a bindu as the central point. However, on the Linga Bhairavi Yantra, there is a linga in the center, which gives the yantra a unique characteristic. Why did you design it that way?

Sadhguru: A Linga Bhairavi Yantra is not in any way symbolic – it is a purely geometric pattern. A yantra is a machine – it has to work, function and deliver something. Every machine is essentially only an enhancement of a faculty that we already possess. We can walk, but with a bicycle we can move much faster. We can speak, but with a phone we can talk much further. The Linga Bhairavi Yantra is existentially functional. It fulfills specific purposes and delivers a certain activity or competence.

This yantra is a complex arrangement of forms. The copper plate is just the foundation. A bindu is a symbolic representation of the original form, which we know as ellipsoid or linga. When you see a bindu in a larger arrangement, and it is shown as a simple dot, it is just an unarticulated ellipsoid or linga. To put it the other way around, the linga is a more articulated expression of the bindu. With the Linga Bhairavi Yantra, it is very articulated. The Linga Bhairavi Yantra functions the way it does mainly because of the shape of the linga and the nature of the material. Most of the “software” of energy is written in the linga. The remaining parts of the yantra are more like foundation, which also has a certain amount of software, but only software of stability. If you create enormous power from any substance or any form, it will dissipate itself unless you create a proper foundation of stability. If that stable atmosphere is there, it can reverberate in a big way. It can energize homes and people in a phenomenal way and still not dissipate over a period of time. If you pass down your Linga Bhairavi Yantra five, six, or ten generations, it will still live.

Editor's Note: The next Yantra Ceremony will be held at Isha Yoga Center 22 - 24 June, 2022. You will be initiated into a powerful process and receive the Yantra in Sadhguru's presence. For more details, click here or call 844 844 7708.
Related Stories
Article

Who is the Real Sadhguru
The following is an excerpt from a Q&A session with Sadhguru during a satsang at the Isha Institute of Inner-scien...
Poem 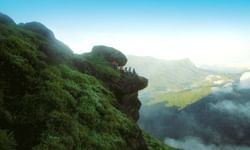 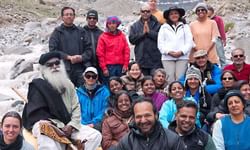