The Story of Guru Purnima: From Adiyogi till Today

Guru Purnima has been celebrated and cherished for thousands of years in the Indian tradition. Sadhguru explores a few stories of Guru Purnima, from the first moment when the first Guru or Adi Guru began transmitting the science of yoga to the Saptarishis or seven sages, to Gautama the Buddha’s prescription to his monks, to the seasonal journeys of sadhakas during this time.

Sadhguru: We have entered the period of Dakshinayana, when the sun’s relationship with the planet changes from its northern movement to its southern run. The shift within the human body is such that during this time, it is more conducive for sadhana, for setting goals. It is the time when the farmer begins to plough the land. It is the time when the yogi begins to knead this piece of earth – the body – that he is privileged to carry. And it is at this time, many thousands of years ago, that the magnificent eyes of the Adiyogi fell upon the human creature.

The Story of the First Guru Purnima

In the yogic culture, Shiva is not seen as a god, he is seen as the Adiyogi, the first yogi. Over 15000 years ago, a yogi appeared in the upper regions of the Himalayas. No one knew where he came from and what his antecedents were – and he did not introduce himself – so they did not know his name. So he is referred to as Adiyogi or the first yogi.

He simply came and sat and did nothing. The only sign of life was tears of ecstasy dribbling down his eyes. Except for that, it did not even seem like he was breathing. People saw that he was experiencing something that they were unable to fathom. They came, waited and left because the man was oblivious of other people’s presence.

Only seven people hung on. These seven people were insistent that they must learn from him. Adiyogi ignored them. They pleaded, “We want to know what you know.” He dismissed them, “You fools, the way you are, you are not going to know in a million years. You need to prepare. Tremendous amount of preparation is needed for this. This is not entertainment.”

The first full moon of Dakshinayana is Guru Purnima, the day the first guru was born.

But because they were so insistent, he gave them a few preparatory steps. So they started preparing – day after day, week after week, month after month, year after year – they prepared. Adiyogi just ignored them. It is said they did 84 years of sadhana. Then, one full moon day, after 84 years, on the day when the sun was shifting from the northern run to southern run – which in this tradition is known as Dakshinayana – Adiyogi looked at these seven people. They had become shining receptacles of knowing. They were absolutely ripe to receive. He could not ignore them anymore.

Guru Purnima: A Possibility to Transcend

This transmission – the world’s first yoga program – happened at the banks of the lake Kantisarovar, a few kilometers beyond Kedarnath. When we say “yoga,” we are not talking about twisting your body or holding your breath. We are talking about the very mechanics of life and how to take this piece of creation – you – to its ultimate possibility. This phenomenal dimension of human consciousness, or the possibility of the individual becoming a window to the universal, was unleashed on this day.

Guru Purnima signifies one of the greatest moments in the life of humanity. This is about transcendence and liberation, a possibility that human beings never knew.

Guru Purnima signifies one of the greatest moments in the life of humanity. This is about transcendence and liberation, a possibility that human beings never knew. It does not matter what your genetics are, who your father was, or what limitations you are born with or have acquired, you can transcend all of that, if you are willing to strive. For the first time in human history he declared that it is possible for a human being to evolve consciously.

A few years ago, when I was interviewed by an American magazine, one of the questions I was asked was, “Who is the most significant person in the West to have worked for human consciousness?” Without hesitation, I said, “Charles Darwin.” They said, “But Charles Darwin is a biologist.” I said yes, but he was the first to come and tell people that it is possible to evolve; it is possible to become something more than who you are right now.

Guru Purnima is about transcendence and liberation, a possibility that human beings never knew.

It is those societies in the West that subscribed to the theory of biological evolution that are open today to a spiritual process. Those that believe that God made us the way we are and that’s it – they are not open to any such possibility.

Darwin talked of biological evolution about two hundred years ago. Adiyogi talked of spiritual evolution more than fifteen thousand years ago. The essence of his teaching is that every atom in this existence – including the sun and the planet – has a consciousness of its own; but what these do not have is a discerning mind. Once consciousness arises with a discerning mind, it is the most powerful possibility. This is what makes human life so unique.

The Monsoon’s Role in the Story of Guru Purnima

After Adiyogi’s transmission was complete, the seven sages set forth to spread the yogic sciences throughout the world. One of them, Agastya Muni, headed south into the Indian subcontinent. Agastya Muni lived a life which could be considered almost superhuman, and he made sure that every human habitation south of the Himalayas had a spiritual process. In many ways, everything that we do here today, what we call Isha Yoga, is just a small extension of Agastya’s work. 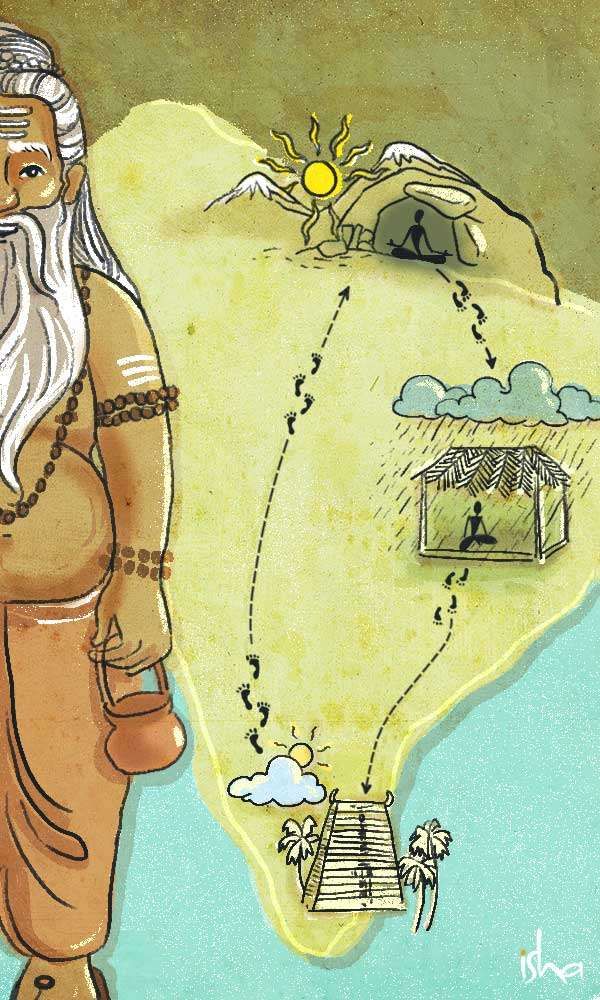 Agastya’s move to the South began a tradition of yogis and spiritual sadhakas setting forth on a cycle of moving from the Himalayan region down south and back again up as the seasons come and go. This constant cycle has been maintained for thousands of years. During the summer, they are in the Himalayan caves, and in the winter they come down south. Many of them travel right up to Rameshwaram, which is the southern tip of the continent, and back north again, walking thousands of kilometers.

This tradition of traveling South and back again has been maintained as a yearly cycle since Agastya’s time. Today, the numbers have dwindled, but there was a time when yogis moved in hundreds and thousands. During that time, when they traveled in huge numbers, this month was a challenge because of the monsoons.

Why isn’t Guru Purnima a holiday? Why should Sunday be a holiday? What are you doing on a Sunday – eating potato chips and watching television.

We do not experience much of it now, but the monsoon has traditionally been a very furious process. The word itself, monsoon, has a certain speed and fury attached to it. When nature got so furious, traveling by foot became difficult. Generally it was decided that for this month, everyone would take shelter wherever they could.

Much later, Gautama the Buddha also prescribed rest for his monks for this one month, just to give them a break from the weather conditions when it would be very hard for people to travel. Because they were staying in one place, it was set up that this month should be spent in constant remembrance of the Guru.

For thousands of years, Guru Purnima was always recognized and celebrated as the day when new possibilities opened up for the human race. What Adiyogi offered predates all religion. Before people devised divisive ways of fracturing humanity to a point where it seems almost impossible to fix, the most powerful tools necessary to raise human consciousness were realized and propagated. Thousands of years ago, Adiyogi explored every possible way in which you could approach and transform the human mechanism into an ultimate possibility.

For thousands of years, Guru Purnima was always recognized and celebrated as the day when new possibilities opened up for the human race.

The sophistication of it is unbelievable. The question of whether people were so sophisticated at that time is irrelevant because this did not come from a certain civilization or thought process. This came from an inner realization. This had nothing to do with what was happening around him. It was just an outpouring of himself. In great detail, he gave a meaning and a possibility of what you could do with every point in the human mechanism.

You cannot change a single thing even today because he said everything that could be said in such beautiful and intelligent ways. You can only spend your lifetime trying to decipher it.

Guru Purnima is about transcendence and liberation, a possibility that human beings never knew. It does not matter what your genetics are, who your father was, or what limitations you are born with or acquired, you can transcend all of that, if you are willing to strive. This day was recognized as such and was one of the most significant celebrations in this culture for thousands of years.

But those who ruled this country in the last 300 years had their own plans. They saw that as long as people are spiritually rooted and strong, you cannot rule them. Why isn’t Guru Purnima a holiday? Why should Sunday be a holiday? What are you doing on a Sunday – eating potato chips and watching television. You do not even know what to do! But if there is a holiday on a full moon or new moon day, we know what to do.

Everyone should take this up. This Guru Purnima, do not go to the office. Apply for leave and say, “It is Guru Purnima, so I am not coming.” Tell all your friends to apply for leave because it is Guru Purnima. What should you do on that day? Dedicate the day for your inner wellbeing, eat light, listen to music, meditate, watch the moon – it will be fantastic for you because it is the first full moon day after the solstice. Tell at least ten other people that this is a significant day.

It is time that a holiday is a day that is significant for us. At least, Guru Purnima should be a holiday so that people know the significance of it. When such a phenomenon got involved with the human creature, it should not go to waste.

Guru Purnima
Indian Culture
Adiyogi
Guru
Consciousness
Transformation
Wisdom
Related Content
article
The Importance of Guru Purnima: A Day to Earn Grace
What is the importance of Guru Purnima compared to the rest of the purnimas and other times of the year? Sadhguru outlines both the celestial alliances and the mystical significance of this time of receptivity and liberation, and he looks at how to make use of this time by becoming available to Grace.
Jul 2, 2020
article
Why Do We Celebrate Guru Purnima?
The full moon day of Ashadha is Guru Purnima. Sadhguru tells us why we celebrate Guru Purnima, and recounts the story of the first Guru, 15,000 years ago.
Jul 2, 2020
article
Sadhguru on the Significance of Buddha Pournami
Buddha Purnima is the full moon day that commemorates the birth, enlightenment and attainment of Mahasamadhi by Gautama the Buddha. Sadhguru talks about the significance of this day and the story behind Gautama the Buddha's enlightenment.
May 3, 2015
Close