Mahabharat Episode 26: A New Beginning for the Pandavas

In this Mahabharat episode, Dhritarashtra’s “gift” to the Pandavas of a cursed, barren desert is transformed overnight by the magic of Indra into the beautiful city of Indraprastha.

In this episode of our Mahabharat series, the division of the kingdom becomes unavoidable. However, Dhritarashtra’s “gift” to the Pandavas of a cursed, barren desert is transformed overnight by the magic of Indra into the beautiful city of Indraprastha.

What has happened so far: After a prolonged power struggle between the Kauravas and the Pandavas, with Duryodhana repeatedly crafting plans to murder his five cousins, Krishna finally advised to split the kingdom into two parts in order to finally establish peace between the two parties.

Sadhguru: Out of his deep allegiance to the nation, Bhishma wanted to avoid at any cost that the territory would be broken up. He went to the elders of Hastinapur and said, “All of you must intervene, otherwise the nation is going to be split into two.” The elders replied, “When you took that vow of lifelong brahmacharya, you did not consult us. Now you are turning to us?” They all knew things were anyway headed for partition and wanted him to bear the pain of executing it.

The onus was on Bhishma to initiate the breakup of the land that he loved. He finally told Dhritarashtra, “All right, split the country. Let the Pandavas have one part and let the Kauravas rule in Hastinapur.” Dhritarashtra called the five Pandava brothers and in the full assembly of the court, he declared he will give them Kandavaprastha, which included the ancient capital of the Kurus. Generations before, Pururava, the son of Budha and the first of the Chandravamsha dynasty, was cursed by the rishis, following which the Kandavaprastha fell into ruin, turned into a desert, and was abandoned. That was the kind of gift Dhritarashtra bestowed upon the Pandavas.

Many believed that the Pandavas would anyway die in this cursed place. But Duryodhana did not want to leave it to chance – he had plans to do them in.

Yudhishthira, being who he was, dutifully accepted it and was getting ready to leave with his brothers and his wife. Krishna intervened and said, “Now to make it fair, half the gold, cattle, horses, and chariots should be given to the Pandavas. And the mallas, the blacksmiths, the goldsmiths, and whoever else wants to go with them, let them go. No compulsion to stay, no compulsion to go.”

Malla means wrestler. The wrestlers were very important in those days. If you wanted to train an army, you needed people who work with them in the gymnasium. This was an unexpected turn of events for the Kauravas, that Krishna said all these people were free to go with the Pandavas. Dhritarashtra and the Kauravas were trying to make it look like a fair share. But in reality, they kept the best part of the kingdom for themselves and gave an abandoned, barren part to the Pandavas. 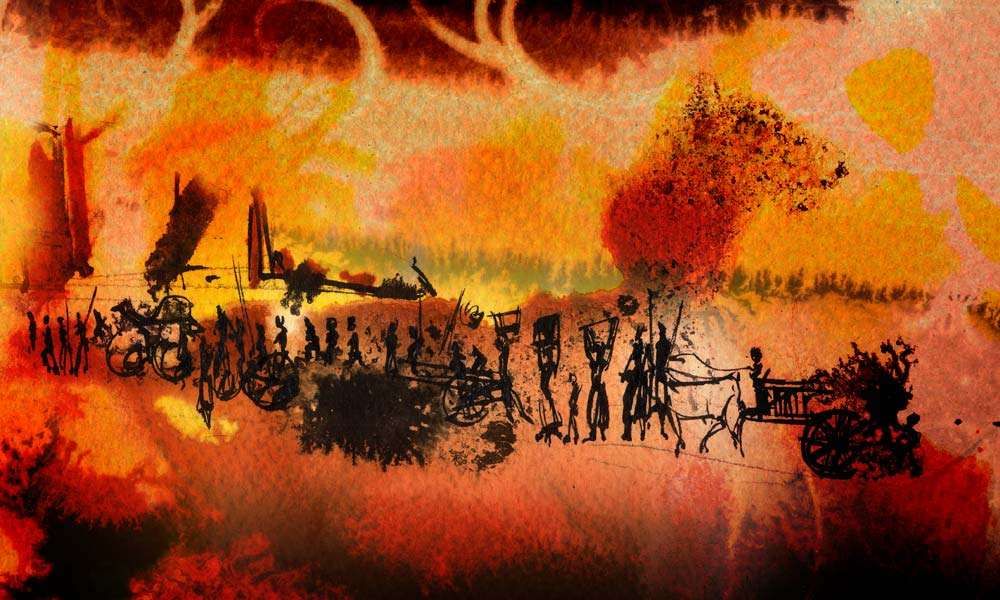 Many believed that the Pandavas would anyway die in this cursed place. But Duryodhana did not want to leave it to chance – he had plans to do them in. But first, the Kauravas had to part with half of their gold, horses, and cattle. And a lot of people decided to go with the Pandavas. The convoy departed. After many days of walking and a lot of people dying on the way, they eventually reached Kandavaprastha. Until then, the five brothers had been enthusiastic. But when they saw how desolate the place was, their heart sank, and Bhima flew into a rage. He said, “I want to kill Duryodhana and his brothers! How can they give us such a place?”

Bhima was the son of the wind – he just flew off. Realizing they had landed up in the middle of nowhere, in the ruins of a cursed city, the other brothers fell silent. In a tone that was unusual for him, Krishna said, “How could Bhishma sanction this, and your Gurus Drona and Kripacharya allow this to happen! The people who have brought this upon you are inviting death with their open arms. It’s not far away.” For the first time, it was no more just Duryodhana – he included Bhishma, Drona, Kripacharya, Dhritarashtra, everyone in the curse.

Exhausted from the journey, the Pandavas and their entourage lay down in the open desert to sleep. Krishna waited for everyone to settle down, then he walked around to feel the place. He raised his head to the sky, and in a tongue that was older than the sun, he called on Indra. With thunder and lightning, Indra arrived. Krishna said, “You have to raise this city with your magic. Then we will rename it as Indraprastha. This will be your city. It should be the most beautiful city the world has ever seen.” And the magic began.

Even the invaders who came from outside chose to rule from Indraprastha. Until today, the corridors of power are there, and Indraprastha lives on. Whether it is still magical or not is a different question.

Vishwakarma, the architect of Indra, was called and ordered to raise the city. When everyone slept, he spread his ethereal body like a blanket across the city, and its walls, its towers, its palaces, its courts, and its homes – everything rose. The magic of it was witnessed only by Indra and Krishna. When everyone woke up in the morning, they found themselves in a beautiful city. The news spread like wildfire, that overnight, “the Pandavas have raised a city.”

From that moment onwards, the Pandavas were seen as godlike by the population. Already, there were stories about them coming back from the dead. People said, “The Pandavas died, went to devaloka, and transformed themselves into gods. Then they came back to the Earth, and now they raised the city overnight.” Indraprastha became the most beautiful city. Even today, Indraprastha is the capital of India – it is a part of New Delhi. Indraprastha continued to be the capital city of various dynasties. Even the invaders who came from outside chose to rule from Indraprastha. Until today, the corridors of power are there, and Indraprastha lives on. Whether it is still magical or not is a different question.

Editor’s Note: A version of this article was originally published in Forest Flower, March 2017.