The Importance of Guru Purnima: A Day to Earn Grace

What is the importance of Guru Purnima compared to the rest of the purnimas and other times of the year? Sadhguru outlines both the celestial alliances and the mystical significance of this time of receptivity and liberation, and he looks at how to make use of this time by becoming available to Grace.

The Celestial Importance of Guru Purnima

Sadhguru: Of all the purnimas, why is this particular one dedicated to the guru? Fundamentally, in terms of receptivity, different points in the Earth’s orbit around the Sun tend to have certain qualities. There are certain days in the year when many sages and saints have found their moment of enlightenment. They did not get enlightened because of those days – they were in the process, they were close – but it easily blossoms on certain days because of a little assistance from nature.

On Guru Purnima, there is a certain alliance between the Moon and the planets, which creates a receptivity in people to that dimension which we refer to as the guru.

Traditionally, people made use of this time of receptivity in whatever best way they could. Usually in India, they would stay out in the moonlight, with the guru if it was possible. The whole night was spent either meditating or singing, dancing and going wild. 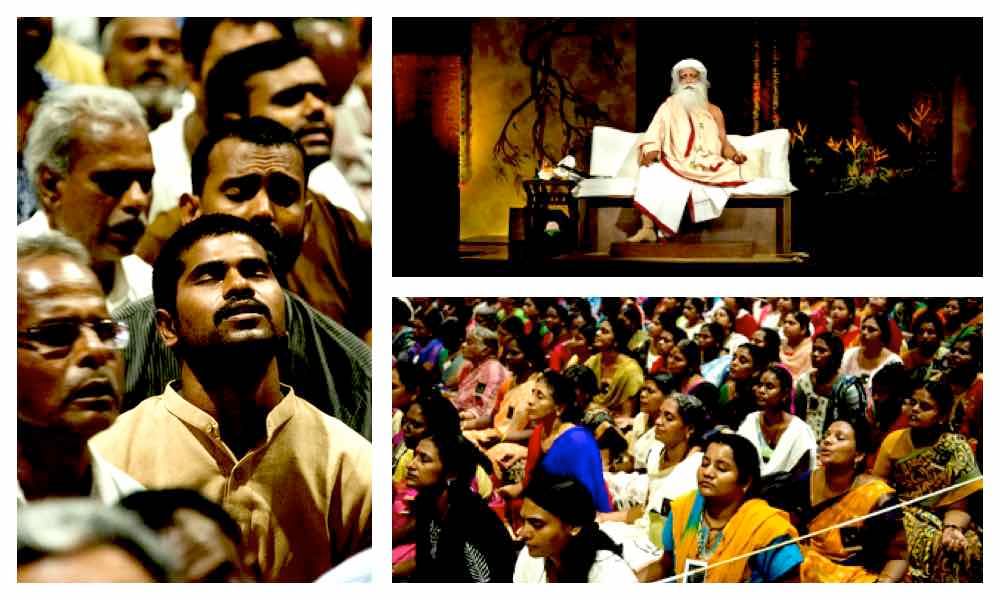 This is the time of the year when the Adiyogi’s attention fell upon his first seven disciples – the now celebrated Saptarishis. In the yogic tradition, Shiva is not worshipped as a God, but is considered the Adiyogi – the First Yogi, and as the Adi Guru, the First Guru from whom the yogic sciences originated.

So, this month is seen as the best time to receive the Grace of the Guru and make yourself receptive to the process.

So, we are in the month when an ascetic and yogi who was completely uninvolved with what was around him, was beginning to get involved. Slowly, the intention of sharing his experience was beginning to blossom in this month.

The Saptarishis had done some simple preparatory steps for eighty-four long years, without even a moment of attention from him. Then, during the shift of the sun from the northern to the southern run – which is called Dakshinayana in Indian culture – Adiyogi noticed that these seven people had become shining beings. After that, for twenty-eight days, he could not take his attention off them. His attention upon them was undivided.

Then, on the first full moon after the summer solstice, he decided to teach. He decided to become a Guru. This full moon is referred to as Guru Purnima. So this month is seen as a month where even a completely heartless ascetic could not ignore, and he became compassionate. Somebody who had hardened himself in such a way that the world could never touch him, he loosened up, became compassionate and was compelled to become a teacher or a Guru, for which he had no intention at all.

So, this month is seen as the best time to receive the Grace of the Guru and make yourself receptive to the process. This is a good time to earn that attention from the Grace.

“What should I do?” is always the question. If you do not do anything of your own, so that you are less of yourself, that is the best way to be receptive. Sadhana is always structured like this, so that it absorbs you into activity in such a way that in the daily process of living, you forget who you are, what you are and what your life is about. You are just absorbed into what is happening. That is the best way to receive Grace.

Then, on the first full moon after the summer solstice, he decided to teach. He decided to become a Guru. This full moon is referred to as Guru Purnima.

Do you know, you even breathe better when you are not aware of who you are and what you are? Do you see how smoothly people are breathing when they are asleep? If you watch their breath through the day, it is going through various kinds of turmoil. The more limited you make yourself, the more limited the breathing process becomes. How the breath happens when you sleep, that is how the breath should be happening all the time.

There is a beautiful expression in the Zen system of allowing human consciousness to grow. A disciple went to a Zen master and asked, “What should I do for my spiritual growth?” “Sweep the floor, chop the wood, cook the food, that is all.”

“For that, why should I come here? I can do it at home.” But there, sweeping is about your own floor. You will not sweep the next house’s floor if it is dirty. You will chop wood for your own use, you will cook food just for yourself and whom you consider as yours. You are using every activity to enhance who you are, not to dissolve who you are. This is all the difference between making our karma either into a bondage or into a process of liberation. Either you are acquiring karma or your karma is becoming yoga.

Get weekly updates on the latest blogs via newsletters right in your mailbox.
On Guru Purnima, there is a certain alliance between the Moon and the planets, which creates a receptivity in people to that dimension which we refer to as the guru.

So, just sweeping the floor, cooking the food, planting a mango tree – your enemy and his children may eat the mangoes, it is all right. We do not care who eats, just plant. Now, the activity is a process of dissolution. Otherwise, every activity is a way of imprisoning yourself. It is activity which is entangling people unfortunately. Human ability to do things is being used to imprison themselves. Human intelligence is being used to cause misery to oneself.

Once you start doing this, unknowingly, you will become an enemy of capability. That is a bad position to take. If you are against all capability and intelligence, you are asking for regression, not progress. You are not asking to evolve, you are asking to regress into a lesser kind of life.

The Importance of Guru Purnima for Your Growth

Today, it has become a fashion for people to say, “I want to be like a child.” Even the so-called spiritual leaders are saying, “I am like a child.” When you were a child, you desperately wanted to grow up quick, because all the capabilities that the adults had, made you look so small and useless. After you grew up, because you do not know how to manage this growing up, you want to become a child.

The less you do within yourself and the more you do outside of yourself, the more available you become to Grace.

Children are nice because things are going to change soon, so we value them the way they are now. But if you remain like that forever, that is not of any value.

Growing up is of value. To be capable of doing many things in your mind and your body is of value. Only if you do not know how to make use of your mind and body, and have made misery and entanglements out of them, then you will wish you had not grown up. Otherwise, to grow is something that everybody wants to do. Nobody wants to go backwards.

So, this month is the month of Grace. Grace is like manure for growth, that a human being can catapult himself to another dimension of existence, capability and possibility. So making use of Grace – what should we do? Nothing to do. The less you do within yourself and the more you do outside of yourself, the more available you become to Grace.

Guru Purnima: A Night of Liberation

On that full moon night of Guru Purnima, 15000 years ago, as Adiyogi turned his attention to the seven sages, for the very first time in the history of humanity, human beings were reminded that they are not a fixed life. If they are willing to strive, every door in the existence is open. A human being need not be confined by the simple laws of nature.

Confinement is one thing that a human being suffers most.  We have been teaching programs in prisons, both in India and a little bit in the United States, and in my experience, every time I entered the prison, there is pain in the air. It is something that I can never articulate. I am not a sappy, emotional kind but I have not gone into the prison even once without tears welling up because there is so much pain in the air. This is the pain of confinement. It is in knowing this and understanding this fundamental nature of a human being that the Adiyogi spoke about liberation.

This culture adopted liberation as the highest goal and the only goal. Everything that you do in your life is only towards your ultimate liberation because whatever the nature of confinement, whether the confinement is imposed by prison guards, marriage, school teachers or just the laws of nature -–  anything for that matter – confinement is one thing that a human being cannot take because his innate longing is for liberation.

On that full moon night of Guru Purnima, 15000 years ago, as Adiyogi turned his attention to the seven sages, for the very first time in the history of humanity, human beings were reminded that they are not a fixed life.

I do not think that any guru or yogi ever found another seven people with whom he could share anything he wanted, who were competent enough to grasp whatever was offered. Many yogis and gurus have found absolutely fabulous devotees with whom they have shared their grace and fulfilled them. But no one has found seven people with whom they could share their knowing. That has not happened…we are still striving.

Editor's Note:  Celebrate Guru Purnima With Sadhguru, in the Presence of Adiyogi.

Guru Purnima
Adiyogi
Guru
Moon
Grace
Shiva
Wisdom
Related Content
article
25 Guru Purnima Quotes From Sadhguru
Here are 25 profound quotes from Sadhguru on Guru Purnima, the nature and role of a Guru, and on a few of the fantastic Gurus who have graced the planet with their presence.
Jul 21, 2018
article
The Story of Guru Purnima: From Adiyogi till Today
Guru Purnima has been celebrated and cherished for thousands of years in the Indian tradition. Sadhguru explores a few stories of Guru Purnima, from the first moment when the first Guru or Adi Guru began transmitting the science of yoga to the Saptarishis or seven sages, to Gautama the Buddha’s prescription to his monks, to the seasonal journeys of sadhakas during this time.
Jul 25, 2018
article
Why Do We Celebrate Guru Purnima?
The full moon day of Ashadha is Guru Purnima. Sadhguru tells us why we celebrate Guru Purnima, and recounts the story of the first Guru, 15,000 years ago.
Jul 2, 2020
Close