Why Is Deepavali or Diwali Celebrated and What Is Its Significance?

See Diwali in a completely new light as Sadhguru reveals the spiritual significance of one of the most exuberant festivals in the world.

What Is Diwali and Why Is Diwali Called the Festival of Lights?

Sadhguru: Diwali or Deepavali is the “festival of lights.” One reason why light is so significant in human life is the way our visual apparatus is made. For other creatures, light simply means survival. But for a human being, light is not just about seeing or not seeing. The rising of light in our life signifies a new beginning and, above all, clarity. Most creatures exist by instinct, so they have no issues of confusion as to what to do or not to do. A young tiger never sits around and asks itself, “Will I become a good tiger, or will I end up as a housecat?” If it just eats well, it will become a good tiger.

You may be born as a human being, but to become a good human being, you have to do so many things. And even then, you still will not know where you stand. In comparison, you may think you are better than someone else. But by yourself, you do not know where you stand. Human intelligence is such that if you do not organize it properly, it causes more confusion and misery than those creatures that have a millionth of your brain will ever experience – they seem to be crystal clear. An earthworm or insect simply knows what to do and what not to do – a human being does not. It takes a certain intelligence to be confused. Human struggle is due to our own cerebral capability.

An earthworm or insect simply knows what to do and what not to do – a human being does not. It takes a certain intelligence to be confused.

Instead of being a tremendous possibility, intelligence has become a problem for a whole lot of people. They may give their suffering different names, calling it stress, anxiety, depression, madness, or misery. But essentially, it means their intelligence has turned against them. If you are suffering by yourself, without anyone poking you, it means your intelligence is working against you. This being the nature of human existence, clarity is of supreme importance. That is why light is important. Light means clarity. Diwali is important because it is a festival dedicated to clarity, to bringing down the murkiness in you.

Why Is Diwali Celebrated?

Historically, it marks the day when Krishna was supposed to have slain Narakasura. Narakasura was not his original name, but he gave everyone hell, so they called him Narakasura. Narak means hell – one who is causing hell to everyone is a Narakasura. When this “causing of hell” was brought to an end by Krishna, people celebrated by lighting lamps in every house. The Narakasura event supposedly happened much later, but the culture and tradition of lighting lamps around this time goes back twelve to fifteen thousand years. People realized that life hits a point of inertia at this time of the year. The idea is that if you yourself are not living like a cracker, fully alive and on, at least crackers around you could wake you up a little bit. That is why on Naraka Chaturdashi, from around four o’clock in the morning, all over the country, crackers are burst, so everyone wakes up, comes alive.

Diwali is a symbol of beating inertia, because inertia is the source of narak, or hell. Once inertia sets in, you will not go to hell – you will be hell.

This is about the nature of the festival, but the important aspect is to beat the inertia. Life is a play of time and energy. You have a certain amount of time and a certain amount of energy. Time passes whether you are busy or lazy, whether you are healthy or sick. For all of us, time is rolling at the same pace. No one can slow it down; no one can hasten it. But your experience of time differs depending on whether you are joyful or miserable. If you are ecstatic, twenty-four hours will seem to pass like a moment. If you are depressed, twenty-four hours will seem like an eon for you.

If you are joyful, it is a very brief life. For the potential that a human being carries, even if you live a hundred years, they will pass in no time. But if inertia has set into you and you are miserable, it feels like time is not rolling. When people are miserable, the need for entertainment increases tremendously. When people are joyful, they do not have time for entertainment. Joy will take up all your time. You wake up in the morning, and before you even notice, it is already night. When you are joyful, you will do everything you can. When you are miserable, you will always see how to avoid everything.

The culture of “Thank God it’s Friday” is catching up. That means five days of misery – two days, not of joy but generally of intoxication. If you want to make people laugh, sing, dance, or do something joyful, you have to drug them, or at least give them a glass of wine – otherwise it is not possible. This has happened because in a variety of ways, people are creating inertia within themselves. When inertia sets in, life will seem too long. Diwali is a symbol of beating inertia, because inertia is the source of narak, or hell. Once inertia sets in, you will not go to hell – you will be hell. In anger, jealousy, hate, and fear, you create narak and become a Narakasura. If these are taken away, a new light shines.

The Significance of Diwali 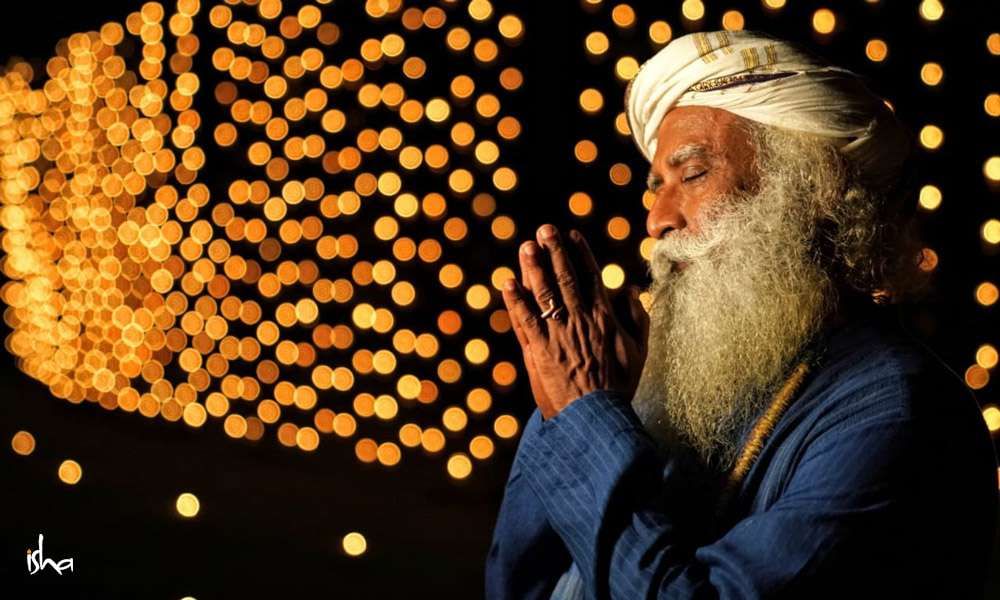 On Diwali, you will see every town, city and village is lit up with thousands of lamps everywhere. But the celebration is not just about lighting lamps outside – an inner light has to come. Light means clarity. Without clarity, every other quality that you possess will only become a detriment, not a gift, because confidence without clarity is a disaster. And today, too much action in the world is performed without clarity.

On a certain day, a rookie policeman was driving for the first time through a town with his experienced partner. They got a message on the radio, which said that there was a group of people loitering on a certain street, and were asked to disperse them. They drove into the street and saw a group of people standing at one of the corners. As the car came close by, the new policeman rolled his window down with great enthusiasm and said, “Hey, all of you. Get off that corner!” The group looked at each other in confusion. Then he yelled louder, “Didn’t you hear me? I told you to get off that damn corner!” They all dispersed. Then, pleased with the effect that he had on people when performing his first official task, he looked at his experienced partner and asked, “Did I do well?” His partner said, “Not bad at all, considering that it was a bus stop.”

The secret of life is in just this – seeing everything with a non-serious eye, but absolutely involved – like a game.

Without the necessary clarity, whatever you try to do will be a disaster. Light brings clarity to your vision – not just in a physical sense. How clearly you see life and perceive everything around you decides how sensibly you conduct your life. Diwali is the day when the dark forces were put to death and light happened. This is also the predicament of human life. Like the dark clouds which brood in the gloomy atmosphere, not realizing that they are blocking the sun, a human being does not have to bring any light from anywhere. If he just dispels the dark clouds that he has allowed to gather within himself, light will happen. The Festival of Lights is just a reminder of that.

Life as a Celebration

In the Indian culture, there was a time when there used to be a festival every day of the year – 365 festivals in a year. The idea behind this was to make our whole life into a celebration. Today, maybe only thirty or forty festivals remain. We are not able to celebrate even those now because we have to go to office or do something else daily. So, people usually celebrate only around eight or ten festivals annually. If we leave it like this, the next generation will not have any festival. They will not know what a festival is. They will just earn and eat, earn and eat – they will go on and on with just this. It has already become like this for many people. A festival means they give you a holiday, and you wake up only at noon. Then you just eat more, go for a movie or watch television at home. And only if they take some external stimulants, will these people dance a little. Otherwise they will not sing or dance. It was not like that before. A festival meant that the whole town would gather in a place, and there would be a big celebration. A festival meant we got up at four in the morning, and very actively, lots of things happened all over the house. To bring back this culture in people, Isha celebrates four important festivals: Pongal or Makar Sankranti, Mahashivratri, Dussehra and Diwali.

If you approach everything in a celebratory way, you learn to be non-serious about life but absolutely involved. The problem with most human beings right now is, if they think something is important, they will become dead serious about it. If they think it is not so important they will become lax about it – they do not show the necessary involvement. When someone says, “He is in a very serious condition,” that means his next step is you know where. A lot of people are in a serious condition. There is only one thing that is going to happen to them which is of any significance. The rest will bypass them because with anything that they think is not serious, they are unable to show involvement and dedication. That is the whole problem. The secret of life is in just this – seeing everything with a non-serious eye, but absolutely involved – like a game. That is the reason the most profound aspects of life are approached in a celebratory way so that you do not miss the point. The idea of Diwali is to bring that aspect of celebration into your life.

Editor's Note:  Eager to learn more about this fantastic festival? Click here to discover more interesting facets of Diwali, including some delicious and healthy Diwali recipes!

Indian Culture
Happiness
Intelligence
Clarity
Related Content
article
Naraka Chaturdashi Story – Killing of All Wrongs
Sadhguru looks at the legend behind Naraka Chaturdashi, when Krishna slew the demon Naraka, and explains how this Diwali legend is still relevant to us today.
Oct 22, 2021
article
What is Navratri? Nine Days of Navratri Explained
Navratri is a period of nine days celebrating the Divine Feminine and is happening from 26 Sep to 4 Oct in 2022. Sadhguru delves into the deeper spiritual aspects of this festival, revealing how the three main qualities in existence are manifest in these nine days.
Jan 19, 2022
article
The Importance of Indian Festivals - Making Life a Celebration!
Sadhguru explains the importance of festivals in Indian culture, and how celebration can be a passageway to the most profound aspects of life. Further down is a list of articles about various festivals, where Sadhguru explains the significance of each one of them.
Mar 4, 2015
Close