Sutra – More than a Thread

Sadhguru explains the significance of sutras in the Yogic culture and reveals the science behind the “sacred thread”.

Sadhguru: Sutra literally means thread. The word is also used in the sense of being a formula or a basis, like the Yoga Sutras and the Shiva Sutras. Let us look at the science of it. Let’s say I held a copper plate in my hand for a minute, and then you were to touch this copper plate. If you are a little sensitive, you will feel it reverberate in a completely different way. But a plate will not be able to retain this energy. If the same copper was shaped differently, it would hold the reverberations much longer. The form and the material have a significance.

Modern science is beginning to recognize the fundamental design of things in existence. For example, there is a similarity between the patterns that flowing water forms and the patterns that happen on sand in a desert. There is also a direct connection between how a river flows and how the human system manifests. The fundamental design of everything in existence is the same. Things only differ in complexity and sophistication. Certain forms are able to hold energy much longer than others. In this context, an ellipsoid is the best form. A perfect ellipsoid is able to store energy for five to ten thousand years, which is an eternity in human experience.

We can energize different types of material – silk for example. If you wear a sari that has been energized in a certain way at Linga Bhairavi, it can leave you completely blissed out, just because the cloth has been at Linga Bhairavi for some time. Silk, raw cotton, and copper are very good in terms of absorbing energy. Mercury is the best. But you should only use mercury if you have the necessary level of sadhana.

What Makes a Thread a Sutra? 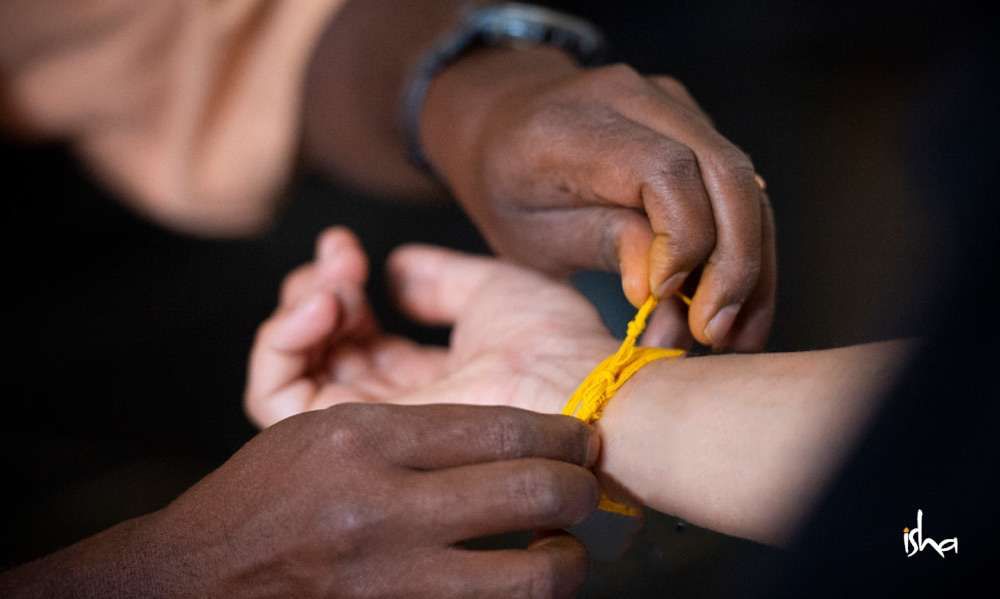 Cotton thread is used as a material to hold energy because it is commonly available, inexpensive, and it works pretty well for a period of time. To enhance its ability to absorb energy, we use certain other materials, such as turmeric.

The full value and magic of turmeric is yet to be understood by modern societies. One aspect is that it removes minor infections from the digestive system, and a certain amount of turmeric and ghee will make the skin glow. The glow is not just of a cosmetic nature. Turmeric purifies the aura.

The immune system does not function just from within. Your immunity also depends on the layer of energy you create around you. Turmeric creates a certain vibrancy around you, which changes the nature of the aura, causes a glow, and enhances your immunity. Another aspect of turmeric is that you can transmit energy through it effortlessly. Turmeric greatly enhances a thread’s ability to absorb energy. Turmeric is what makes a thread into a sutra. We can create different kinds of sutras according to the purpose. It can be done in simple ways or sophisticated ways. It needs to be prepared in a particular way in order to function as intended. For example, a mangal sutra is about binding two people together.

In India, there was a whole science behind conducting a marriage. When two people were to be married, it was not just the compatibility of the families or the bodies which was looked at, but a deeper energy compatibility between the two people. Most of the time, the two individuals getting married would not even have seen each other until the day of the marriage. But it did not matter because the compatibility was fixed by someone who knew such things better than the couple themselves.

When the couple came together, a Mangal Sutra was prepared. “Mangal Sutra” means “sacred thread.” The preparation of the sacred thread is an elaborate science. A few strands of raw cotton are taken, smeared with vermilion and turmeric, and energized in a certain way. The Mangal Sutra was prepared in such a way that once it was tied, it was for life and beyond. There have been situations where the same couples have remained together for lifetimes, consciously choosing to be like that because they employed ways to tie people together not just on the physical or emotional level. People’s nadis (subtle energy channels) were tied together.

Using a Mangal Sutra, people tied up two lives in a certain way. Now for these two people, there is no question of thinking, “Should this person be my wife or husband or not?” This question just does not arise. The relationship just goes on. It does not stop even with death. There are any number of couples in India where if one of them dies, the other one follows within a few months even if they are healthy. This is simply because the energies were tied together. If you are bound in such a way with another human being that two beings exist as one, that is a wonderful way to exist. It is not an ultimate possibility, but it is a beautiful way to live.

For certain other purposes, it has to be an intelligent thread that functions the way we want it to. To give a few examples – there is a thread around the Adiyogi Linga in the Adiyogi Alayam. For Linga Bhairavi, we have removed the thread. But there is always a thread around Vanashree at the Dhyanalinga, which is changed periodically. They are all made differently. The normal process of preparing a thread takes a certain period of time – sometimes thirty to forty days. If they have to be made instantly, it costs a certain amount of life.

There was a particular situation a few years ago when I was travelling, and I had to create some threads without going through the regular preparation. I did not do the necessary work with myself afterwards that needs to be done so that it would not affect me. The next day, I could barely walk, which is something that has hardly ever happened in my life. I am not someone who gets giddy anywhere, whether you put me in a giant wheel, a rollercoaster, or you spin me around. But that day, I was wobbling because I had to create the threads instantly.

Essentially, a sutra is a medium. We could use something else, but a thread is an easy and handy way to do it. It serves the purpose and lasts for a sufficient period of time. Let us say if someone is on a sadhana for six months, we will tie a certain type of thread. If I put someone on a three-year sadhana, I tie a different type of thread, because it must last three years. Otherwise, if a thread alone does not last long enough, we will add some other material to it, so that it will last longer.

A sutra is like the body, just the physical basis – the energy is something else. In Yoga, we are using the physical only as a base, which is the nature of creation. Even your physical body is only a platform. It is not the real thing. That is the way the whole existence is made. However, in modern societies, we have fixed certain parameters which are purely physical and so we are trying to limit the whole existence to physicality.

There is an incident in the Yogic lore where Shiva used a sutra to create a being. Once, Daksha – the father of Shiva’s first wife Sati – was performing a yagna, a sacrificial fire. Sati was present there, however Shiva was not. During the yagna, Daksha said something insulting about Shiva. Unable to bear the humiliation, Sati went into the sacrificial fire. When Shiva came to know that she immolated herself because of the disgrace that they caused to her, he got so incensed that he pulled out one of his dreadlocks, whacked it on a stone, and Veerabhadra, a mystical soldier, came into existence.

Shiva let him loose, and Veerabhadra went and slaughtered over one thousand people who were attending the yagna and did not do anything to prevent Sati’s death. Shiva said, “My wife walked into the fire. No one thought it is even something that they should have stopped. You just sat there and watched.” He said, “Every one of you must die,” and Veerabhadra impaled Daksha.

Shiva used his own hair to create Veerabhadra. If a sutra is organic, raw, and it has turmeric and is wet, then in a matter of a few seconds, you can make it like a part of your body. A sutra is a thread that puts something together.

Patanjali’s Yoga Sutras are only the thread. According to the competence of whoever handles this thread, they may put mud beads, pearls, diamonds, or their life on it. There are many things that can be strung with a thread. Depending on what part of the body we have to tie the thread – suppose we have to put it around your waist or your neck – it has to be made in different, more elaborate ways. A sutra around the arm is the simplest thing, because it is for a very specific, limited purpose. If it has a more elaborate purpose, more elaborate preparations need to be done.

The Intelligence of Inanimate Things

Even so-called inanimate things are functioning in a specific manner. If you were to sow the same seed in different places, it would grow and turn out differently according to the quality of the soil, the atmosphere, and a whole lot of other factors. The soil may be inanimate, but it has its own characteristics. It functions the way it wants to function.

Abhaya Sutra - The Devi Abhaya Sutra is a specially consecrated cotton thread. When it is tied around the wrist, it can be supportive to remove one's fear and fulfill ambitions. Women wear it on the left wrist, men on the right. It must be worn for a minimum of 40 days. It can be removed by untying or severing it by a flame. It can then be disposed of either by burying it in wet soil, or burning it and applying the ashes from the pit of one’s throat down to just below the sternum.

Sarpa Sutra - The Sarpa Sutra is a consecrated copper ring in the form of a coiled snake. Wearing a metal ring - especially made of copper - on the ring finger stabilizes the body and provides the fundamental support for sadhana or spiritual practices for a seeker. With the right kind of sadhana, wearing the Sarpa Sutra can become a key to mystical dimensions of life.

Indian Culture
Marriage
Energy
Death
Mysticism
Intelligence
Wisdom
Related Content
article
The Swadhisthana Chakra – The Abode of the Self
Sadhguru describes the multitude of possibilities that the Swadhisthana chakra offers – from basic procreation to creating divine entities.
Nov 8, 2018
article
The True Nature of Patanjali’s Yoga Sutras
Patanjali was not only a man of many talents who wrote texts on medicine, language, and grammar, he was one of the 18 classical Tamil siddhars (sages and intellectuals), and a realized being. But he is probably most widely known as the “father of modern yoga” – not because he originated yoga, but because he distilled the essence of yoga into the famous Yoga Sutras. Here, Sadhguru sheds light on why the Yoga Sutras came into being and how to approach them. He also delves into the first two sutras, disclosing the background of the cryptic Sanskrit words that form the verses.
Dec 21, 2018
article
Sadhguru on Patanjali, Sushruta and Panini
Sadhguru describes a few of India’s multitude of sages, seers and realized beings.
Sep 23, 2016
Close