Am I the Body? | A Dialogue Between Neuroscientist David Eagleman and Sadhguru

The nature of the mind is such that it is looking for something to identify with. This makes sense for your survival process but it does not awaken a different dimension of knowing. For that, the most important thing is to not identify with anything.

David Eagleman: What is the “you” that can be separated from the physical body?

Sadhguru: Is it a fact that you gathered your body over a period of time?

David Eagleman: It is a fact that this body was gathered together over a period of time, and it may be that the feeling of “I” emerged as a consequence of that – as opposed to me doing the gathering.

Sadhguru: Have you been having lunch and dinner?

Sadhguru: That means what you refer to as “my body” right now is an accumulation of food. What you call as “my mind” is largely impressions accumulated over a period of time. If you have to accumulate all these impressions and this much body, something more fundamental must be there.

David Eagleman: Houston, Texas is an accumulation of roadways and buildings, but we would not say that Houston was there before they gathered together.

Sadhguru: But you are not a piece of geography, are you?

David Eagleman: I may be exactly that. From my perspective, this seems like a possibility because there are thousands of people whose geography is changing because of Alzheimer’s, stroke, tumor, or traumatic brain injury, and who they are changes. It does not seem like there is something fundamental that outlasts damage to the tissue.

Sadhguru: You are speaking about thought and emotion. We have made a mistake in giving too much significance to human thought. Whatever you think, it is only happening from the limited data that you have gathered. The data that we have gathered, however big we may think it is, is miniscule in terms of the cosmos and is really not of any consequence. We are generating some thought from this miniscule data which could be useful in making our lives, creating a few things, and for enhancing our survival process. But it does not give you access to life.

Thought and emotion are psychological dramas that are happening within you, which you can conduct any way you want. Even without any accidents, injuries or ailments, people’s drama can go wrong on a daily basis. Either your faculties are taking instructions from you, or they have become compulsive for some reason. Either you can consciously conduct your body and mind, or it has become compulsive. Whether you call it a physical or mental ailment, all that has happened is that you have lost control over your fundamental faculties of existence on this planet: your body and your mind. If your body and brain took instructions from you, would you create depression, illness, or anything else? You would create the highest level of pleasantness for yourself, wouldn’t you?

David Eagleman: But is there a separate “you” that could gain control?

Sadhguru: You keep referring to “my brain.” If you say “my brain,” that means it is yours. What is yours cannot be you.

David Eagleman: It is a colloquialism that we use to refer to this one in particular. We need to specify which brain we are talking about.

Sadhguru: When I say “my hand,” I know that I can still exist even without it. Similarly, if certain parts of the brain are gone, our ability to think and feel the way we were doing before may be gone, but that person is still not gone.

David Eagleman: That is the question. If I lose a little part of my finger, I am still me, but if I lose a chunk of brain tissue of the same size, I can be someone completely different.

Sadhguru: You are talking about personality. Personality is an acquired thing.

David Eagleman: Beyond personality, I can lose memory, consciousness, and the ability to perceive reality the way we do now. I might become colorblind due to a lesion or damage to a particular part of my brain, and I can lose the ability to understand what objects are.

Sadhguru: Alright, let us come to this. Suppose someone unfortunately became colorblind due to an injury. That person still understands that they have become colorblind. They are still there.

Sadhguru: Even a person who is visually impaired and has never seen the world around still exists within themselves, and is as much a man or woman as anyone else. It is only because someone has this faculty that they do not have, that they have a problem. If none of us had eyes, we would have still found our way around, just in a different way. There are mammals who are flying by sound, after all. 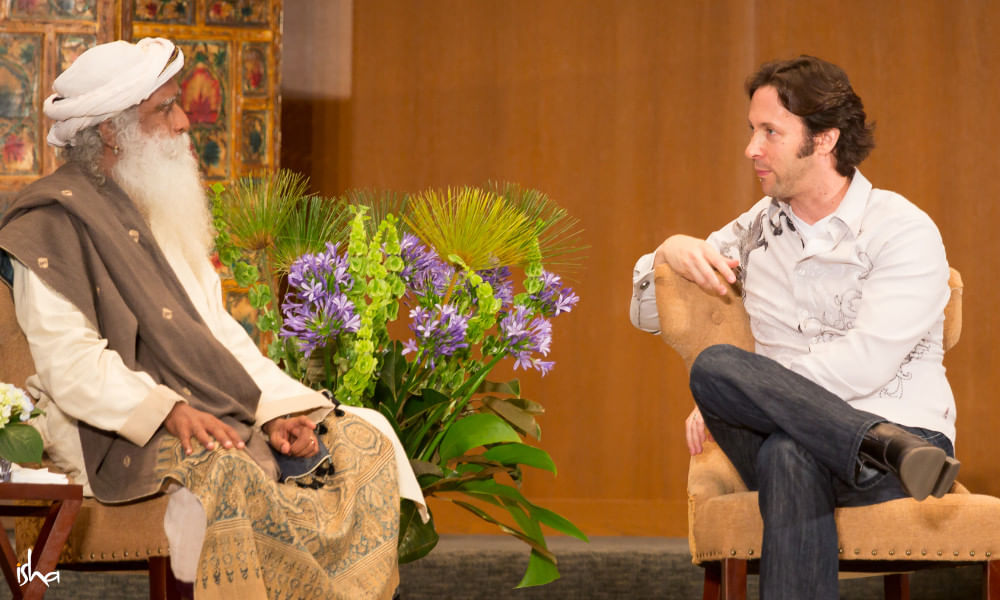 David Eagleman: Yes, there are so many dimensions that we are currently blind to. What we call visible light is only one trillionth of the electromagnetic spectrum that is out there. Some branches of physics claim that there might be between 10 to 13 spatial dimensions, not just the three we currently know, yet we are trapped in these. But my point is that we are already blind to most of the world. So, I agree with you.

Sadhguru: See, you cannot disagree that you are life, can you? You are a piece of life, I am a piece of life, everyone is. The kind of personalities we have acquired, the likes and dislikes, gods and demons, and other things we have acquired is a social and cultural process that has happened to us. If you were born in a different part of the world, it would be entirely different. These are impressions that we have taken in depending on what we are exposed to. Leaving that aside, let us look at one fundamental. Whatever you gather, you can only claim that it is “mine,” you cannot say that it is “me.”

David Eagleman: Do you mean your body?

Sadhguru: Anything. I can say “This is my chair.” If I sit here every day and then say, “This is me,” then there is a problem.

David Eagleman: Alright. Are you talking about identity? What you identify yourself with.

Sadhguru: Yes. The nature of the mind is such that it is looking for something to identify with. This is because human intellect and intelligence has broken out of a certain bond which was there for every other creature, allowing them to function like an automated machine through certain instinctual processes. Through evolution, the human being has broken out of that instinctual process and there is an intelligence which has to function consciously. This means that every moment of life is an exploration which is too scary for many people. So, they identify with something that gives them a sense of what they are. This sense of what you are, based on your social and cultural backgrounds, makes sense for your survival process but not for an explorative process. It only keeps you sane and in good solace. It helps you to sleep well at night. It does not awaken a different dimension of knowing, nor does it awaken the possibility of exploring dimensions which are not yet within you. If that has to happen, the most important thing is to be able to sit here without being identified with anything.

This is why I say that it is so hard to remain uneducated in this world, because everyone is busy wanting to teach you something. This is all I did in my life: to remain uneducated, not to be influenced by my parents, family, religion, culture, or education that people are forcing on me. I just wanted to be the way creation intended me to be - simply. I may not fit into the university milieu, but I am okay. Just the way you were born, not binding your intelligence to any particular thing – such as nationality, religion, race, creed, family, gender, or any kind of identity – simply viewing your life as a piece of life. If one does this, then their perception will explode in ways that they could not have imagined possible.

Body
Mind
Emotions
Wellbeing
Consciousness
Personality
Compulsiveness
Conversation
Related Content
article
The Fire Element – 4 Types of Agni
Sadhguru shares a deeper understanding on the most fascinating of the five elements – fire! He not only explores the different forms of fire within the human system and their effects, but also cultural and even cosmic dimensions of fire.
Feb 14, 2022
article
Mahishasura Mardini – The Symbolism of Devi Slaying Mahishasura
Find out from Sadhguru why Devi is known as Mahishasura Mardini and the significance of this symbolism in our lives.
Jan 8, 2022
article
2 Causes and 4 Effects of Soil Degradation
Soil degradation is the most pressing ecological challenge of our time. Sadhguru reveals the underlying causes of soil degradation and outlines four adverse effects it can have on the planet’s ecology.
Dec 28, 2021
Close