Isha Biksha and the Story of Annadanam at Isha

We share the story of Saraswati Paati, one of Isha’s oldest volunteers, who prepared food during the first Wholeness Program in 1994.

Twenty years ago, Isha’s first Wholeness Program began. There were about forty participants and a handful of volunteers. Food for the participants during the 90-day program was almost single-handedly taken care of by one of the oldest volunteers of Isha – Saraswati Paati.

“Back then, we just had a small hut with a tin roof. We didn’t even have the right equipment to cook with. There was a cowherd who had a small portable stove which we used”, Paati reminisces. “Everything happened on a small scale during the Wholeness Program; one volunteer would get vegetables. Spinach used to grow right here, so I would make something with that, then adai, upma or rice. I remember, one of the volunteers loved sweets, so I’d make whatever we could with the ingredients we had.”

“Back then, there were only three rooms: two rooms made of stone and a small hut, where the cooking would happen. Sadhguru would eat here rarely – he was in Coimbatore then. Whenever he came, he would stay in one room and I would make food for him. I would make a salad just for Sadhguru, and also knead chapathis for him. After Viji Maa came, I also started making rasam for them. Sadhguru also liked spinach, I think. I made a lot of that for him!” 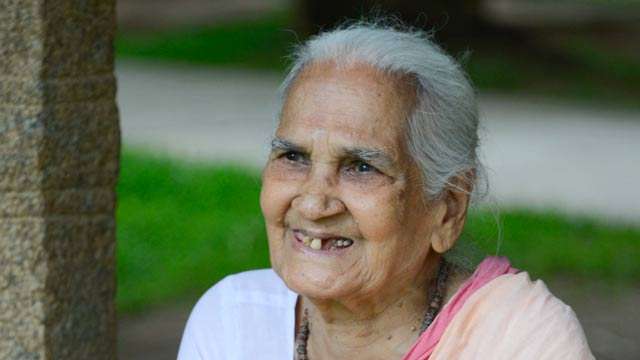 Saraswati Paati was a participant of the Wholeness Program for the first thirty days, when she was taught asanas, angamardana and mahathpranayam. “I could never understand what Sadhguru said. He spoke in English most of the time. But he told me that language isn’t a barrier, just be with me and you’ll automatically understand. And he was right! I would always understand exactly what he was trying to convey.”

After thirty days, the Teacher’s Training Program began for a period of sixty days, during which Paati was a volunteer, cutting and cooking and spending long hours in the kitchen. And that wasn’t all. Apart from the cooking, Saraswati Paati also cleaned the rooms and program venues and did her fair share of gardening. “There were a lot of hibiscus plants,” she says. “I would spend a lot of time watering and taking care of them.”

So how did her tryst with Isha begin? “My son was a volunteer here, twenty years ago. At the time, there weren’t too many people to cook, so he asked if I could come and make food. I said yes, and I’ve been here ever since. I came when I was 62,” Paati says.

“Sometimes when I look at the Ashram, I wonder how it actually grew so quickly. When I came, we didn’t even have a place to take a bath. Now, we have such well maintained bathrooms, and so many of them, besides the Chandrakund and the Suryakund. Back then, we had a few knives to cut fruit and vegetables, now we have machines and equipment and a big cutting area. The growth is astounding!”

Isha has indeed grown a lot since Paati cooked for a handful of participants in 1994. The Biksha Hall today feeds an average of 2000 people every meal, and this Mahalaya Amavasya, 20 years after Saraswati Paati first prepared food, Isha Biksha was launched.

Isha Biksha allows a donor to make a one-time contribution to offer food once a year for the next 21 years. You will also receive a blessing from Sadhguru every year on the occasion of your choice.

The project was launched in the midst of the Mahalaya Amavasya program at the Adiyogi Alayam, and it was only appropriate that Saraswati Paati unveiled the banner, amidst applause and celebration!

Volunteer
Food
Related Content
article
8 Benefits of Honey and Its Traditional Uses
We look at the many health benefits of honey - it is antiseptic, antibacterial, good for your blood and helps with digestion. Honey is also a home remedy and in traditional medicine.
Jan 5, 2022
Loading...
Loading...
article
Horse Gram (A Super Food): 11 Amazing Benefits
Find out everything about horse gram, the miracle pulse. A traditional elixir for ailments like diabetes, heart disease, kidney stones, asthma, obesity, cold and many more, horse gram is highly protein-rich, high in calcium, low in fat and full of antioxidants. Here are 11 horse gram benefits that are sure to convince you to try it out. Plus, there is a recipe in here too!
Mar 14, 2021
Loading...
Loading...
article
Ash Gourd (Winter Melon), the “Cool” Vegetable: Benefits & Recipes
Learn all about ash gourd, an incredibly versatile vegetable which boasts a laundry list of benefits for health and wellbeing.
Mar 7, 2021
Loading...
Loading...
Close