A Sacred Walk in Southern India

The first edition of Isha Southern Sacred Walks is all set to begin in the new year! Today we bring you a small glimpse of the powerful cities, towns and temples covered in this sojourn."

The peninsula of Southern India is home to one of the most unique and powerful forms of mysticism. The yogis of this land created many tools for human beings to reach their ultimate nature. The magnificent temples of the south are the most obvious and powerful of these tools.

These temples were not created as places of worship, but as energized spaces that touch a human being at the most fundamental level. This creates tremendous possibilities. The impact of their energies has a lasting presence that stays with an individual long after leaving the space.

Isha offers you the rare privilege of exploring the beauty and sacredness of some of South India’s most renowned temples. Powerful processes and sathsangs ensure that you are receptive to the explosive power of these spaces.

Today, we give you a quick glance of the places lined up on the Southern Sacred Walks itinerary. This sojourn is the latest offering from Isha Sacred Walks, held between the 20th and 26th of February, 2014.

Located on the foothills of Annamalai hills, Thiruvannamalai is a popular pilgrimage town in Tamil Nadu. The history of this place revolves around the Arunachaleshwara temple, which is our first stop. The temple, inhabited by saints and sages for 1000s of years, is one of the Pancha Bhuta Stalams (five ancient shrines built for sadhana around each of the five elements – fire, earth, water, air and space). The Arunachaleshwara temple was built for the element of fire.

A sojourn at Thiruvannamalai is incomplete without a short trek up the Arunachala hill, leading to the Ramanashram and Virupakshi Malai caves. It is in these caves that Ramana Maharshi had spent over a decade in meditation, and came to be known as Bhagwan Ramana Maharshi. 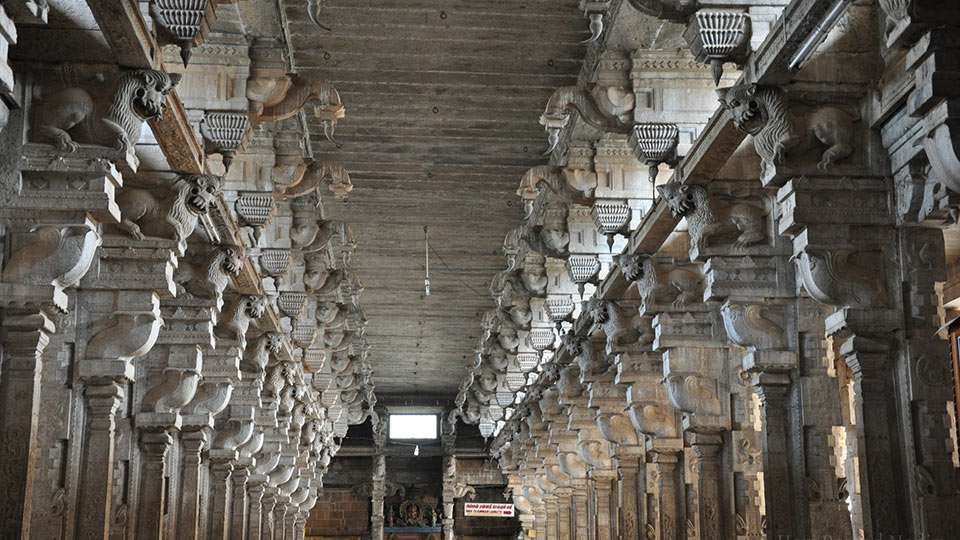 Thiruvanaikaval, a suburb of the city of Tiruchirappalli (Trichy) in Tamil Nadu, is home to the famous Jambukeshwarar temple. Also a part of the Pancha Bhutas, this temple is built for the element of water.

An underground water spring at the temple fills up the sanctum where the linga stands. Another unique aspect is that the priests dress up as women before performing the afternoon rituals. It is believed that Parvati had performed penance on the spot of the Jambukeshwarar temple, and created a linga from the waters of the nearby Cauvery River.

At the city of Trichy, we stop for a visit to Sadhguru Sri Brahma’s ashram, where he spent some time in a state of Samadhi. The powerful energy that reverberates in this place simply cannot be missed.

The Brihadeeswarar temple at Thanjavur is not a Pancha Bhuta shrine. Yet, we will be stopping at this 1000-year-old temple that is considered the pinnacle of Chola architecture. The most famous feature of this temple is the immense 66 meter tall shikhara, or central tower. The tower is capped by a single stone weighing almost a 100 tons.

Thanjavur is also famous for its cultural heritage. So we won’t miss getting a taste of the city’s indigenous handicrafts at the local arts and crafts center.

The next stop is Rameshwaram, also in Tamil Nadu, but not before visiting the Ariyaman beach a few kilometers before the town. The pristine blue ocean and white sand make this beach picture-perfect.

Rameshwaram is well-known as the place where Rama built a bridge across the sea to Lanka, to rescue his wife Sita from her abductor, Ravana. The connection exists between Rameshwaram and Varanasi, a city in Northern India. Sadhguru explains the significance of this connection:

The linga that Sadhguru refers to is at the Ramanathan temple, which is our next stop. It is one of the twelve Jyotirlingas located in various parts of India. There are other lingas at this temple too, each made of different materials like salt, crystal and sand. The temple also has 22 sacred water bodies that were consecrated by Patanjali – the father of modern yoga.

This small village at the southern tip of Rameshwaram island is famous for being the exact point where Rama’s bridge to Lanka begins. Rama is said to have marked the spot for the bridge here with one end of his famous bow.

Dhanushkodi was once a bustling town, but it was completely destroyed by a cyclone, half a century ago. A few remnants are left behind today. Train tracks, a railway station, a school and a few other buildings stand amidst the shifting sands and winds of the beach, giving the place an other-worldly feel.

The program culminates with Guru Pooja – an offering of gratitude to the great beings of the past, who have made available the powerful possibility of self-transformation.

Editor’s Note: Southern Sacred Walks is being offered for the first time in the year 2014. The sojourn will be held between the dates of 20th and 26th of February. The last date to register for the program is the 15th of January, 2014. For more information, please visit sacredwalks.org.