In this week’s Spot, Sadhguru writes about the wildness of Linga Bhairavi, and how she is intentionally not aligned with the solar system. “I believe that in the future, Devi will be the first step for many people. They will bask in that wilderness for some time, and then come into the symmetry of Dhyanalinga.” Enjoy!

Namaskaram Sadhguru, Previously, you spoke about the significance of the sandhya kalas and brahma muhurtam, but why does the abhishekam in the Devi temple happen outside of these times?

This is a question that opens up too many things. To put it simply, when we create any form, there is a whole system of mathematics behind it. Dhyanalinga is perfectly aligned with the solar mechanism. That is why we are saying, very confidently, that he will live 5-10,000 years, because he is perfectly aligned to the natural system. But Devi was not made like that; she is a little crazy, a little offbeat. You must understand the meaning of offbeat – that means that whatever is the natural beat, she is off that. She is offbeat intentionally because her work and her energy are different.

The sun is perfectly round every day, but the moon takes on a new phase, so people pay more attention. She is like that too; she is going through her own cycles of two-and-a-half or twenty-seven-and-a-half days. And because her energies are on a shorter cycle, the spin is bigger and she creates a more easily experience-able energy compared to someone who is perfectly round. So, she will not follow the sandhya kalas or brahma muhurtam – no. She is not aligned to the natural forces because a woman wants to be different one way or the other, and she is distinctly different. That is the draw, beauty and possibility because you cannot help paying attention to her. If your life energies get drawn and you touch her, you can be on a very ecstatic, orgasmic ride. If you simply sit with her, she will drive you that way because her energies are mad like that.

She is fierce and totally wild. She is not just a woman - she is a Woman-Woman.

That is why I always fear that she will become more popular than Dhyanalinga, and my fears are manifesting. I see a lot of people wearing Devi pendants, but I don’t see anybody carrying the Dhyanalinga on their head. If she becomes too popular, we may close the Devi temple for three months. But if we close and then reopen, she will become even more popular because once you ban something, everyone wants to see it. So, I do not know how to handle her, but she is doing gloriously well.

Actually, the temple would become phenomenally popular if we kept it open only at night. She needs night -- in the night, she is on. If you enter the Devi temple at night, you will see it is another dimension of life. But we don’t want to take it there because societies everywhere - including India - have become terribly prudish. They are afraid of anything that is fierce and wild. In India, a Devi like this is always depicted riding a tiger to indicate that she is fierce -- more fierce than the tiger. But people think wildlife is no good, they want tame, they want be able to play with the tiger. Our idea of civilization is to make everybody tame. People do not even like somebody who looks wild – like me, with a beard. Everything that can be removed has been removed, not with any purpose or awareness, simply removed.

She is not tame. She is fierce and totally wild. She is not just a woman - she is a Woman-Woman. The reason why we have set up the ashram so far away is that we want a whiff of the wild, not the organization of a city. We have set up some silly fences, but if a herd of elephants want to enter, they can just walk in at any moment. If a tiger, panther or king cobra want to come through, they can just come through. The spiritual process and being on the edge are very directly connected. I believe that in the future, Devi will be the first step for many people. They will bask in that wilderness for some time, and then come into the symmetry of Dhyanalinga. That is how it will become because you cannot ignore that wilderness about her.

Devi Linga Bhairavi is an extension of my Idaa or the left expression of my energy system. The play of Devi has been a phenomenal process and experience for me. May you be touched by her magical ways that are wild and compassionate at once. 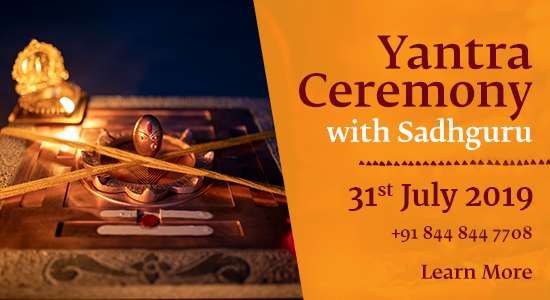 Conscious Planet – Three Billion for One Planet | Sadhguru Spot
In this Spot video, Sadhguru introduces Conscious Planet, an initiative to create a world where a large number of human beings act consciously, and where communities and governments take more responsible environmental action. To really create an impact, Sadhguru says, “We want to get three billion people on board.”
Mar 1, 2020
sadhguru spot

Living Death
In the latest Spot, Sadhguru welcomes the new year with an important reminder to become more intimate with life’s only certainty – death. We’ve grown used to perceiving death as a horrible thing, but Sadhguru explains that like inhalation and exhalation, we must embrace both, life and death. He guides you how to make the right choices and how to sparkle in your existence. Through an embodiment of “living death,” you create a different possibility for how to spend your time on this planet.
Jan 10, 2020
sadhguru spot

From Magic to Mysticism
In this video, travel with Sadhguru to Madison Square Garden, New York, for the Mystic Eye program, and University of Toronto for the latest edition of Youth And Truth. Sadhguru then heads to the UN Convention to Combat Desertification in Bonn, Germany, and finally returns to iii in Tennessee, for the Linga Bhairavi Yantra Ceremony.
Dec 27, 2019
Close