Isha Gramotsavam, a celebration of rural life and rejuvenation is taking place on September 4, in Coimbatore. In this article, Sadhguru looks at the many social initiatives of Isha Foundation and why they have been created.

ArticleSep 4, 2015
Isha Gramotsavam, a celebration of rural life and rejuvenation is taking place on September 4, in Coimbatore. The festival showcases the essence of rural Tamil Nadu, through an elaborate display of rural art, drama, dance, music and food specialties. The event will also highlight the role of sports in rural life by featuring the final rounds of the inter-village sports tournament.

In this article, Sadhguru looks at the many social initiatives of Isha Foundation and why they have been created.

Sadhguru: We are doing the Isha Yoga programs on many different levels. 70% of our work is in rural India – in the villages; 70% of the programs happen without any fee. But we are also focusing on empowering the economic, political and religious leadership. We are very concerned as to how people who hold responsible and powerful positions in the world are, because what kind of leaders we have will determine how the world runs and works.

Sadhguru: Left to myself I would like to only be a spiritual source to people because that is the thing I know best; but social realities cannot be ignored. If you want to talk spirituality, you have to first ensure that people are at least eating reasonably well and that there is some sense to their basic life format. If this basic work was done by society, the Guru would have the pleasure of just doing the spiritual part of the work. But when that basic work has not been done, unfortunately we will have to take up that work also. I am not some kind of a social reformer or something but when there is such an express human need around you, you cannot ignore it.

Action for Rural Rejuvenation or ARR is an attempt to re-engineer social situations that have gone bad so that human beings can find a conducive atmosphere to blossom. The basic scope and aim of this outreach program is to make people’s life situations worthwhile so that they can find their full potential in whatever they are doing. This project is not just aimed at improving the economic conditions of people, though that is one of the major issues which needs to be handled. It is a way of raising the human spirit and inspiring a human being to stand up by himself.

Sadhguru: Project GreenHands came about because in the year 1998, certain experts made a prediction that by 2025, 60% of Tamil Nadu will be a desert. When I heard this, I didn't like it. This is a land which has nurtured us for thousands of years. So I spent the first six years from 1998 to 2004 planting trees in people's minds. That is the most difficult terrain to plant them.

Then from 2004 onwards, we have been transplanting these plants from people's minds to the land. That has been a joyful process. A few million people have participated in this project – Project GreenHands, which has become a great movement in Tamil Nadu. Everyone, including the administration and media are participating. Above all, the common Tamil people have stood up and what they have done is incredible.

Sadhguru: The Isha Vidhya schools are rural schools. In rural India, 90% of the schooling is still conducted by the state government in the local language. Today, English has become the basic means to participate in the economic activity in the world; your ability to participate in the world essentially depends on whether you know English or not. Our goal is to start English-medium, computer-friendly schools where right from kindergarten, the children start on computers. These schools are for children whose parents are still daily-wage laborers. The only goal in our minds for these kids is to enable them to participate at a higher level of economic activity rather than being an unskilled laborer.

We want the Isha Vidhya schools to also serve as model schools, and then generate teachers and adopt government schools.

If you look at India as a nation, we neither have the land nor mountains nor forests nor rivers nor even a piece of sky for 1.25 billion people. The only thing we have is people. If we leave this population uneducated, unfocused, uninspired and unskilled, we are the biggest disaster waiting. But if these 1.25 billion people are educated, focused, balanced and inspired, we are a miracle.

We want the Isha Vidhya schools to also serve as model schools, and then generate teachers and adopt government schools. So far, we have adopted 56 government schools with over 34,000 children. But close to 10 million children study in the government schools of Tamil Nadu. It only takes a small amount of intervention to get them inspired, educated, and skilled. With a little bit of involvement, a lot can be done.

We are making these herculean efforts to put these initiatives together and make them happen with the idea that many other people would be inspired to do the same. We can provide the know-how and share our experience. This needs to happen country-wide. I hope many organizations and especially the corporate sector takes it up and makes it happen.

Isha Home School is a residential school situated in the premises of the Isha Yoga Centre, at the foothills of the Velliangiri Mountains, near Coimbatore. Founded in 2005 by Sadhguru, Isha Home School offers a stimulating curriculum which encourages a child’s natural curiosity and eagerness to learn. The school is affiliated to the ICSE Board for class X and to the ISC Board for the XIth and XIIth standards.

Sadhguru: For any human being, education essentially means expanding your horizons, that you are enlarging the scope of your life. Every time you enlarge yourself, it is a joyful experience – to get to know something is always a joyful experience. But why is it that dozens of children commit suicide, unable to bear the pressure of examinations? It is simply because of the way education is delivered. Today, education has become so suppressive. The whole education system as it is right now could in many ways be totally destructive to a human being. That does not mean you have to take away education. It just has to be delivered with a more human face to it. Somewhere an inspiration is needed, not just information.

Children are not studying anything which is not life – it is all life. But today’s education is being taught in such a way that it is not life-relevant. I don’t know how many students experience chemistry as a life-relevant subject. They don’t, though chemistry is very relevant to our lives. We should make education very life-relevant. It must be an exploratory process where the child should feel like he is discovering things, and not as though something is being handed down to him all the time, which he is supposed to remember and write exams on.


So we started the Isha Home School. It is called a Home School because it is run like a family. Children of different age groups study together, learn together and grow up together like a family, with very dedicated, highly qualified teachers, who at the same time have a beating heart and create an atmosphere where children grow up learning to live well.

Making the children study is not a big thing. If you brush up their intelligence without too much suppression and if you create a thirst for knowing, you will see they will effortlessly pass examinations. 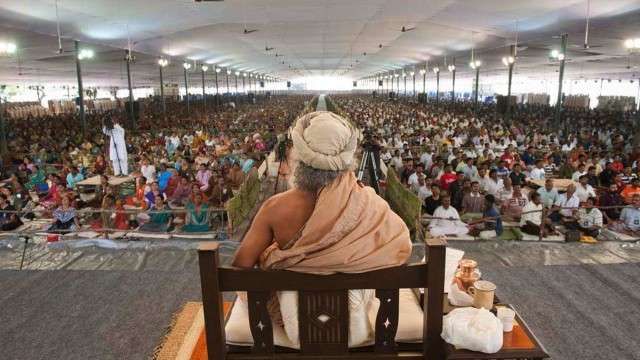 Sadhguru: We are engineering a movement that we want to build up in the next few years in such a way that there should be no human being in Tamil Nadu who does not have at least some kind of a simple spiritual process. I have always had this desire but in the last few of years it's become so strong in me because I saw a few of my uncles and aunts dying. They lived well by any normal standards. They got married and everything worked out. Children came and they got educated and found the kind of jobs they are supposed to find. They got married and had their children; everything happened. They are in their 70s and 80s and everything that they wished in their life has happened, but one by one they are dying such a desolate death. Everything that they wished in their life has happened, still it's so barren that when that moment comes, they die so badly.

Every human being should have at least one simple spiritual process in his life. If he had that, he would live well every day and he would die well.

When I saw this, I saw the only thing that’s missing is, they don’t even have a simple spiritual process in their life. Every human being should have at least one simple spiritual process in his life. If he had that, he would live well every day and he would die well. If he knew how to simply bring this forth within himself on a daily basis, he would live differently within himself. It doesn’t matter what the hell is happening with his job or his family, those things need to be managed according to individual skill, but how one lives within himself, what his experience of life is, we could raise it to a different level. So we want to build this spiritual movement where it is very simple, where anyone who comes at any time of the day or night gets initiated in half an hour’s time. He has something simple to hang on to in his life that he will live well and die well.

Volunteer
Nation Matters
Spirituality
Wellbeing
Environment
Education
Isha Outreach
Wisdom
Related Content
article
Isha Sanghamitra – Crafting a Conscious Planet
During a special Satsang on the auspicious day of Guru Purnima, Sadhguru answers a question from a seeker who wants to know what they can do for their Guru…
Jul 29, 2020
article
Empowering India Through Isha Vidhya
In this month’s Q&amp;A, Sadhguru speaks on the fundamental principle and vision of Isha Vidhya: “None of Isha Foundation’s activities are based on any concepts or ideologies. It is based on the existing need of the people around us.”
Nov 13, 2012
article
Raising Children: A School Where Learning Is Fun
Sadhguru and renowned film-maker, Shekhar Kapur, explore education, competition, inspiration, and the intricacies of raising children who will be a blessing to humanity!
Nov 13, 2014
Close