What is Tantra Yoga? Definitely Orgasmic, But Not Sexual

A seeker asks Sadhguru, “What is Tantra?” Sadhguru looks at the Tantric tradition, and explains how the Guru-disciple relationship can definitely be orgasmic, but not sexual.

Question: It is said that in the Tantric tradition, when the relationship between the Guru and shishya becomes intimate and sacred, there could be a closeness that could even be sexual. The shishya-guru attraction – as evident in the Krishna-gopi tradition of amorousness – might manifest as sexual union. So what is Tantra really and how does it relate to our sexuality?

Sadhguru: Unfortunately, in Western countries, Tantra is being presented in such a way that it is supposed to mean uninhibited sex. It has been so badly misinterpreted. This is because books on Tantra have been written by people who just want to sell books. They are not Tantrics in any way.

The word “Tantra” literally means a technique or a technology. This is an inner technology. These are subjective methods not objective methods. But in the current understanding in society, the word "Tantra" refers to very unorthodox or socially unacceptable methods. It is just that certain aspects are used in a certain way. It is not any different from Yoga. It is a limb of Yoga called Tantra Yoga.

People thinking in terms of “I have sexual needs so I will follow the tantric path,” is nonsense.

The human mechanism is a composite of the physical body – an accumulation of food consumed; the mental body – the software and memory part that makes individuals function in specific ways; and the energy body – the fundamental upon which these two are housed. What is beyond this is non-physical.

The compulsive and cyclical nature of the body and mind render themselves a barrier for higher possibilities. Tantra is to go beyond, so that compulsiveness of the body and mind does not keep us trapped in our limitations. It is about learning to use the body, not as oneself, but as a stepping-stone to deliver this being to the highest possible dimension.

Tantra Yoga: Blowing From the Top 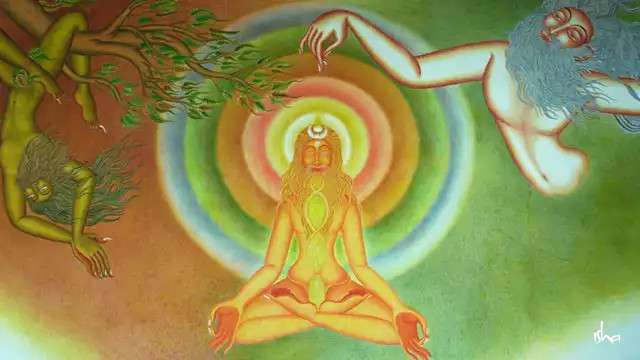 Tantra is not about unbridled sexuality, as assumed by many. Sexuality is a fundamental instinct instilled in our bodies to ensure the species perpetuates itself. This is a basic requirement. At the same time, one must know the limitations beyond which it will not carry us. It is only upon recognising the limitations, and when the longing to touch other dimensions comes, that Yoga and Tantra become relevant.

People thinking in terms of “I have sexual needs so I will follow the Tantric path,” is nonsense. In Tantra, it is not that someone is using just sexuality to grow. They are using every aspect to grow. Unfortunately, there may be people who are attracted to such a path for the wrong reasons. They want a spiritual sanction for their sexuality. Why do you want to bullshit yourself about spirituality? Handle your biology as biology, you do not have to give it other names.

Why do you want to bullshit yourself about spirituality? Handle your biology as biology, you do not have to give it other names.

Sexual needs can be fulfilled by forming relationships for that purpose, either within or outside the fold. Using spiritual process to fulfill sexual compulsions is reprehensible and irresponsible. It can lead to various levels of loss because the Tantric process is not only used for the individual’s spiritual growth, but also to create an energetic space to support other possibilities that bring wellbeing to many.

Of the different energy manifestations in the body – referred to as the 114 chakras– spilling from the top three is considered the highest. If you have to build up to this, every basic instinct, including the sexual instinct, emotions, intellect and survival process must be used to build and hype the energy system. The intention is to deploy all instincts for which a certain amount of energy is dedicated in the body. If one goes into an actual sexual act, the build-up and the purpose of it will be lost. This is a path that needs extreme discipline, a kind of discipline which is not possible for most people to even attempt.

However, this is what is known as left-hand Tantra which is cruder technology. It involves various rituals. There is also a right-hand path which is very refined technology. These two are completely different in nature. The right-hand path is more internal and energy-wise, it is all about you. It does not involve any ritual or outside act as such. Is it Tantra? In a way it is, but the word Yoga includes all of them together. When we say Yoga we are not excluding any possibility – everything is there in it. It is just that a few perverted people saw a certain type of process which is purely left-hand Tantra where there is certain usage of the body. They just took that part, magnified it and wrote books about it with all kinds of weird sex. That is not Tantra.

This is a tremendous gift that Agastya Muni offered us, that he established a Tantric process which is one hundred percent rooted in the body. Nothing is taken from the outside. Not one grain of rice or sand is being used to perform all the different dimensions of Tantra. Everything is internalized within the system. This is his gift to us. In terms of the human mechanism, this is one of the greatest things that has ever been offered to us from any source. This is Agastya’s offering.

No Guru without Tantra

Tantra is not some weird nonsense but a certain capability. Without it there is no possibility. The question is, “How refined is your Tantra?” If you want to make your energies move, do you have to do 10,000 rituals or can you just sit here and simply do it. That is the big difference. Low technology or high technology is the question, but without Tantra, there is no spiritual process.

Saints who are like gentle lilies and who bless people are beautiful in their own way, but they are not for people who are lusting for enlightenment.

There is no Guru without a Tantra. If he has no technology, he is not a Guru. He can only be a gentle saint who will bless everyone. A blessing has no discretion. If you are a thief and you meet a saint, you would seek his blessing and he would bless you so that you could do your job well today because his blessing has no discretion. It cannot have discretion because that is not in his control. Even bandit tribes like the pindaris had their own gods and goddesses. They had their own saints. Their gods always guided them about which home to hit today. Banditry was their profession and they pursued their profession successfully for centuries.

Saints who are like gentle lilies and who bless people are beautiful in their own way, but they are not for people who are lusting for enlightenment. They are only for people who are just seeking small improvements in their life. If you walk into a shopping store, you can make some improvements to your life. I see on the television that people come and say, “Oh I just bought this bed and my whole life has changed. It is amazing!” I did not know that a bed or a pillow could do that! So if you walk into a store and walk out with something that you did not have before, you could change your life a little bit. How much of it changes is subject to so many things.

If you are cold right now and someone gave you a jacket, it is life changing. But is that the change we are talking about? If that is so, it is fine, you can seek blessings. But if you are talking about spiritual growth and reaching to your ultimate nature, what is a Guru without a capability? You cannot call him a Guru. Capability means a certain ability to do things which people cannot do for themselves. In that sense, if there is no Tantra, there is really no Guru. When I say Tantra, it is just a Sanskrit word for technology. I am using the word in that context, not the way people have been psyched to believe.

Tantra Yoga: It's Not About Huffing and Puffing

The Guru-shishya relationship is to deliver the shishya to a higher dimension of consciousness, not trap one into the compulsive nature of sexuality. Above all, this sacred relationship is definitely orgasmic, but not sexual. I am talking about upgrading your technology. You do not have to huff and puff to get into an orgasmic state. If you sit with your eyes closed, you can drip with orgasms in every cell of your body. Those who have failed to achieve an orgasmic state of existence will associate an ecstatic state with sexuality because that is probably the highest level of experience they have known.

The Guru is here essentially to overwhelm you with nameless ecstasies.

If all you want is to do a meditation or spiritual practice, you don’t really need a Guru. The Guru is here essentially to overwhelm you with nameless ecstasies. Tantra is a technology of liberation, not enslavement.

Editor's Note: The often misunderstood word - “Tantra” - has fired the imagination of many a human being. But only a few have known it by experience. Hear all about it from Sadhguru, only on Sadhguru Exclusive! Register today.

Tantra
Yoga
Guru
Energy
Spirituality
Sexuality
Wisdom
Related Content
article
Tantra Yoga: Becoming an Instrument of Life
Jul 9, 2013
article
What is Tantra - Definitely Orgasmic, But Not Sexual
Tantra is often misunderstood to mean sexual acts and this misinterpretation extends to the Guru-disciple relationship. Sadhguru looks at how the Guru-disciple relationship can definitely be orgasmic, but not sexual.
Oct 31, 2013
article
The Significance of Dreams - From Desire to Tantra
Sadhguru explains the different types of dreams, from ones manifesting unfulfilled desires to aspects of tantra where dreams crystalize into reality.
Dec 23, 2013
Close