The Significance of Thaipusam and Story of Skanda

Here is the story of Skanda and how Thaipusam became a significant day because of him. Sadhguru explains how Skanda's greatest victory was not the battles he won but the realization he came to after fighting them.

Sadhguru: The first Purnima or full moon day after the winter solstice and Makar Sankranti* is called as Thaipusam. In the southern part of the country, it is known as “Dhanya Pournami” – a full moon of fulfillment. In many ways, it is considered to be the most generous full moon of the year, due to the Earth’s position in relation to the Sun. Those who are seeking to enhance life in the best possible way will reap maximum harvest at this time. For ages, people have seen Thaipusam as a day to hone their instruments of victory and success in the material world, in the emotional world, and in the spiritual world.

The Story of Skanda

According to legend, it was on Thaipusam that Parvati gave the spear to Skanda, who is also known as Muruga, Kumara, Kartikeya, and Subrahmanya. He fought across the subcontinent with this weapon, and became famous as the greatest warrior ever. It is said he went beyond the present borders of Bharat. He was an emperor of all the rulers, but he never held a kingdom. He only fought battles because he was committed to annihilating injustice.

Skanda realized that somewhere deep inside, his fury made him seek revenge in the guise of justice.

The boy was angry, and when someone hugely blessed and with immense capabilities becomes angry, such things can happen. Wherever he thought there is injustice, he started killing. He spent most of his youth killing people. He killed people across the subcontinent and slightly beyond. Then he realized justice and injustice are not always absolute. Most of the time, it is a question of perspective.

Skanda realized that somewhere deep inside, his fury made him seek revenge in the guise of justice. When you go after someone thinking you serve justice, they experience it as revenge. Never in history have human beings achieved absolute justice. It can only be about the larger good or larger harm. What is for the larger wellbeing may be perceived as injustice by a certain group of people. Even within a family, someone always feels there is injustice towards them.

There is no absolute justice. When Skanda realized he was fighting for a goal that is not just elusive but illusive, he washed his sword and spear, went up the mountain that is now known as Kumara Parvat, and left his body.

Why Do We Celebrate Thaipusam? 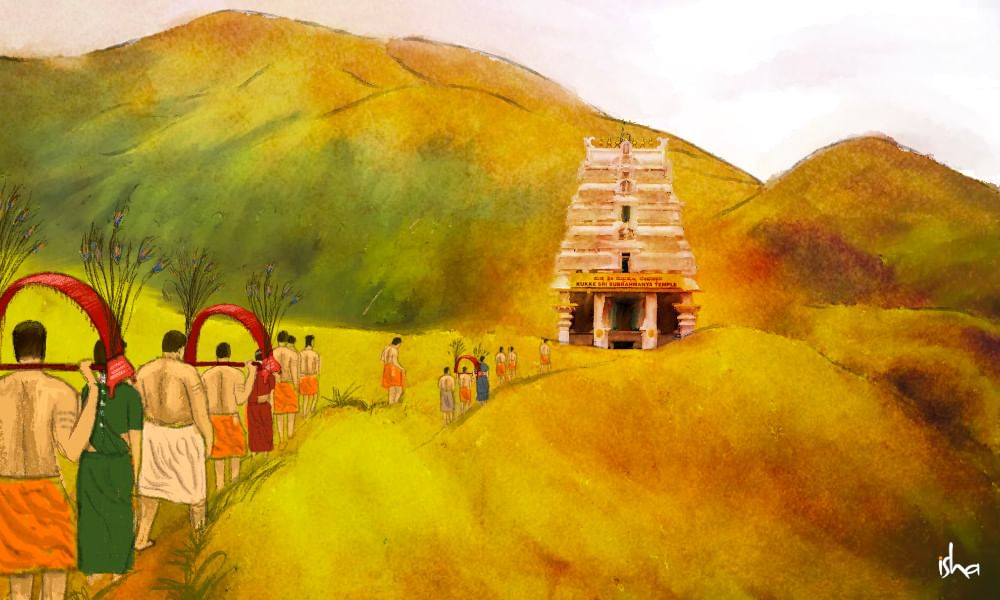 That is Skanda’s story. He was so successful because he got his weapon on Thaipusam, according to the legend. Ultimately, he came to the realization that his mission was not right. He would be considered a failure anywhere else because he failed in his mission. But in this culture, we regard the fact that he realized as the greatest success – not material things, not the number of his victories or the completion of his mission. All over southern India, people worship the boy more than his father, Shiva himself.

Our idea of victory is not conquest. Our idea of victory is to obliterate and dissolve ourselves. This is the land of devotion. The object of devotion is dissolution. We may use another object as a means to dissolve, but the fundamental objective is to dissolve. Thaipusam is considered as the best day to start a pilgrimage because a pilgrimage is a process to wear ourselves down in every possible way.

There is still a vibrant culture of pilgrimage in southern India where people walk hundreds of miles to the Murugan temple on Palani Hill in Tamil Nadu and other places. We have recognized that whatever we do within ourselves for our inner wellbeing finds results much more easily at this time.

How Linga Bhairavi Can Empower You 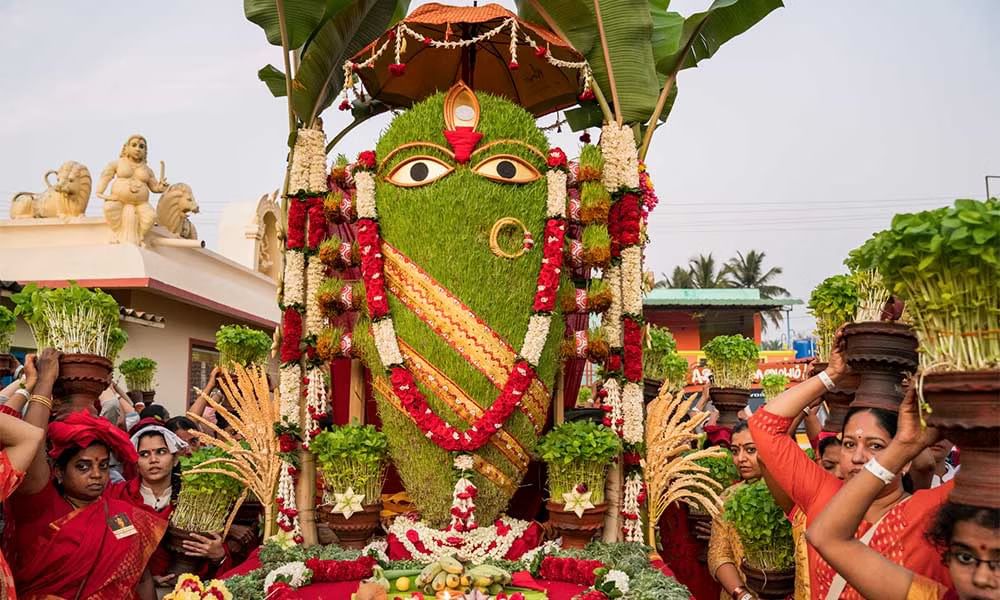 This land and culture have prospered and been the greatest success for the longest period of time in the history of humanity, not based on its organizational skills but on unfolding of individual genius. We have produced magnificent human beings; the kind of human beings that gods would be envious of. The energy manifestation that we refer to as Linga Bhairavi Devi today is a significant aspect that one can use to unfold a whole variety of human capabilities.

Everything that any human being ever knew could become accessible to you if only you open up your perception in certain ways. Many aspects of life got invested in different people, in little parts of knowing. If all that comes together in one human being, then what happens around will be incredible and fantastic. That is the potential of Devi. We could create more complex and sophisticated methods to access this potential, which would need enormous mental focus and energetic capabilities, but the best way to go right now is with utter devotion.

What Devotion Is All About 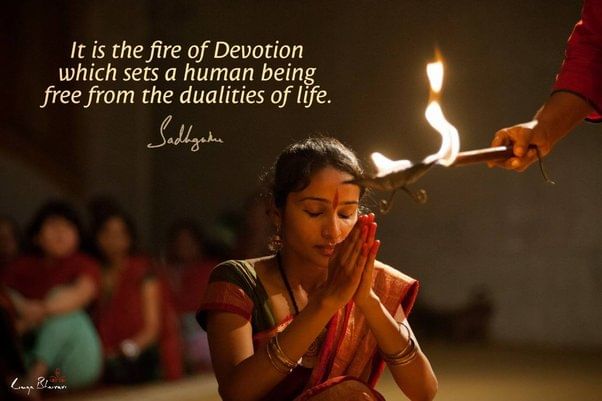 The object of devotion is dissolution. You are not planning to dissolve the body but everything that you consider as yourself right now, which is a bundle of likes and dislikes, hates and loves, wows and pukes. If you dissolve everything that you consider as yourself, and you are able to see, feel, and experience life just the way it is – not the way you think it is – you will become available to grace. If you access this grace, you will live in such a way that other people will think you are superhuman. But this whole thing is not about being superhuman. It is about realizing being human is super.

In this culture, there is no super-human being. It is all about human beings rising to become godlike.

In this culture, there is no super-human being. It is all about human beings rising to become godlike. The people that you worship, whether it is Krishna, Rama, Shiva, or Muruga, all of them walked this land and went through all the pains and struggles of life. But today, when you look at them, you think they are god-like. They did not drop from the heavens. It is very important that they remain an inspiration for you to aspire to become like that.

How to Become Competent for Life and Beyond?

Devi is different – we made her up, because we understood the technology of god-making – not just as an emotional tool, but as an energy manifestation of magnificent proportions. Devi will not do some silly miracles for you. She will make you overflow with life, to such an extent that if you have to die today, you will go willingly. Not that you want to die. You are living. You are living not because you want to live, but because you kept your system well. It is not your desire but your competence that gives you victory.

Devi is very much in tune with that. She does not care what your desires are. Devi is looking at how to make you competent for this life and beyond. And that is important.

Editor's Note: Wish your loved ones a very happy Thaipusam with these 15 Thaipusam Wishes.

Related Content
article
Am I the Body? | A Dialogue Between Neuroscientist David Eagleman and Sadhguru
The nature of the mind is such that it is looking for something to identify with. This makes sense for your survival process but it does not awaken a different dimension of knowing. For that, the most important thing is to not identify with anything.
Jan 20, 2023
article
How to Defeat a Thief? – a Zen Story
A compulsive thief is caught red-handed again and again. How to deal with him? Two stories give us an insight into punishment, compassion and human nature.
Dec 16, 2022
article
The Fire Temples of Azerbaijan and Arunachala
The fire temples of Arunachala and Azerbaijan (Baku) have an interesting history and lore surrounding them. Sadhguru explains the significance of these places and why people traditionally went there during the last stages of their lives.
Oct 4, 2022
Close