The Spiritual Significance of Water in India

The dire water situation in India could well see the sacred Ganga River stop flowing – something that could damage the spirit and psyche of the entire nation.

ArticleJul 29, 2019
Sadhguru: Essentially, what you call as “myself,” what you call as the human structure, is the work of a certain “software.” We know today that software means memory. Whether it is the individual human body or the larger cosmic body, essentially, they are made of five elements — earth, water, fire, air and space. All the five elements have a memory of their own. That is the reason why they behave the way they are behaving.

And, with just a thought, an emotion or with a certain control over your energies, you can influence this memory immensely, to a point where everything about it will change.

Today, there is substantial scientific evidence which shows that with a thought or an emotion, you can change the molecular structure of water, without changing its chemical composition. Without any kind of chemical changes, the same H2O, can be poison or it can be the elixir of life, depending upon what kind of memory it carries.

Our grandmothers told us we should not drink water or eat food from just anybody’s hands; we must always receive it from people who love and care for us. This is why in traditional homes in India, people will have a nice brass vessel which they wash every day, do a puja for, and only then fill with water to drink. In temples, they give you one drop of water, which even a multi- millionaire covets because you cannot buy that water anywhere. It is water which remembers the divine. This is what theerth is. People want to drink it so that it reminds them of the divinity within them.

You thought this was all superstition, but now scientists are saying the same thing. Scientists are finding that water’s molecular composition changes from being violently pumped, and travelling to your house through so many turns in lead or plastic pipes. With all these bends and turns, much negativity happens to the water. So, water has memory; and, 72% of your body — your physical existence — is water. You are a tall bottle. So, if you can make the water in a vessel pleasant, can’t you influence the water in you to be pleasant? This is the science of yoga. Bhuta means the elements, and bhuta shuddhi is the cleansing of the five elements within the system. Bhuta shuddhi is the most fundamental aspect of yoga. Every aspect of yoga that you do is just a small extraction from bhuta shuddhi practices.

Water is an essential element of your survival, but today, the kind of water situation India is facing is really dire. The per capita volume of water that is available in India today is only 18% of what was available in 1947. Today, there are many towns in India where they bathe only once in three days. India’s is a culture where no matter what, even if you do not eat, you have a bath. Nowadays, people are skipping their bath. This is not development; this is not well-being. A situation seems to be coming where we will have to drink water only on alternate days. As a nation, we are not organized enough nor do we have the resources to move millions of liters of water from one place to another and make sure people have water to drink. Millions of people would just die without water.

When I was trekking in the Himalayas a few years ago, I was at the Tehri Dam which is built on the Ganga. I was told that the water level was so low that it would only be enough for 21 days. If it did not rain in 21 days, there would be no Ganga downstream that year. Can you imagine the damage it would do to the Indian psyche if the Ganga stops flowing? The Ganga is not just a river for us. There are some spiritual groups which are very actively involved in preserving the Ganga, and they are very concerned about how it is handled. Emotionally, for Indians, the Ganga is a symbol of very large proportions. People in the city may not think so, but for a regular Indian, the Ganga means something larger than life — it is not a river, it is something more. It is the very symbol of life for us.

If the rains were delayed by just two or three weeks, which can happen any year, there would be no Ganga flowing down; that is where we are. So, the thing is just this: either we consciously control our populations, or nature is going to do it in a cruel manner to us. This is all the choice we have. It is not my policy that we must not increase the population. It is just that either we consciously control this or nature is going to do it in a very cruel way. If we are human, we must do it consciously and not allow these things to happen to ourselves.

Editor's Note:  Cauvery Calling is a campaign to support farmers in planting 242 crore trees and save Cauvery. This will increase water retention in the basin, while improving the income of farmers five-fold. Contribute to plant trees. Visit: CauveryCalling.Org or call 80009 80009. #CauveryCalling

A version of this article was originally published on Speaking Tree.

Explore water’s phenomenal possibilities with Sadhguru - from the legend of the Water Temple to the many ways in which water can be tuned for our wellbeing. Only on Sadhguru Exclusive. Watch now. 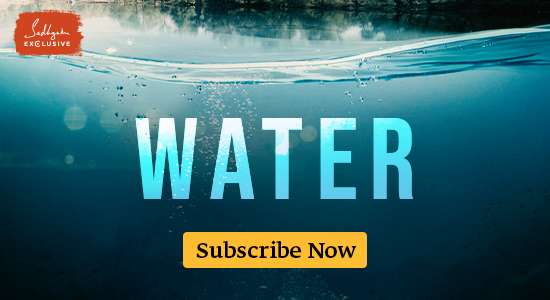 Indian Culture
Outreach
Five Elements
Related Content
article
What is Navratri? Nine Days of Navratri Explained
Navratri is a period of nine days celebrating the Divine Feminine and is happening from 26 Sep to 4 Oct in 2022. Sadhguru delves into the deeper spiritual aspects of this festival, revealing how the three main qualities in existence are manifest in these nine days.
Jan 19, 2022
article
Naga Panchami and the Symbolism of the Snake in Mythology
The festival of Naga Panchami is not merely snake worship as commonly believed, but has a much deeper significance. Sadhguru explains the snake symbolism and the immense possibility that it is.
Jan 12, 2022
article
Mahishasura Mardini – The Symbolism of Devi Slaying Mahishasura
Find out from Sadhguru why Devi is known as Mahishasura Mardini and the significance of this symbolism in our lives.
Jan 8, 2022
Close