Patanjali - The Father of Modern Yoga

Yogi and mystic Sadhguru explores the incredible life and capabilities of Patanjali, the father of modern yoga and the author of the celebrated yoga sutras.

ArticleJun 25, 2014
Yogi and mystic Sadhguru explores the incredible life and capabilities of Patanjali, the father of modern yoga and the author of the celebrated yoga sutras.

Sadhguru: If you look at Patanjali, as an enlightened being, he can’t be more enlightened than someone else. There is no such thing. Realization is realization. But as a man and above all as an intellect, he is such an intellect that the great scientists of today look like kindergarten children in front of him. The breadth of his understanding of life is so big that you cannot believe that this is possible in one human being. In his mastery of language, mathematics and in his perception of astronomy, he is so fantastic. Today’s scholars argue that this is not one man’s work, that many people must have worked to make this happen because it is so big, it cannot fit into one man’s intellect. It is one man’s work. He is probably one of the greatest intellects ever on this planet.

He is known as the father of modern yoga. He did not invent yoga. Yoga was already there in various forms, which he assimilated into a system. Shiva, the Adiyogi or first yogi, transmitted yoga to the Sapta Rishis or the seven sages many thousands of years ago. He had the highest understanding of human nature, but he didn’t put anything down in writing. He was too wild to be a scholar. He found it was too difficult to put everything he knew into one person, so he chose seven people and put different aspects of yoga into them. These became the seven basic forms of yoga. Even today, though these have branched off into hundreds of systems, yoga has still maintained seven distinct forms.

Patanjali came much later and sort of assimilated everything. He saw that it was getting too diversified and complex for anyone to understand in any meaningful way. So he assimilated and included all aspects into a certain format – as the Yoga Sutras.

He just understood humanity inside out – not as people but as a total mechanism of the human body, mind, consciousness…

Sutra literally means a thread. Or in modern language we can say it is like a formula. Anyone who knows the English alphabet, even a kindergarten child can say E=mc², but there is an enormous amount of science behind that little formula, which most people do not understand. The sutras are like this, in thread form. Out of ignorance, people have just taken these sutras and are trying to implement it as it is. A thread is of no consequence by itself. There can never be a garland without the thread but no one ever wears a garland for the sake of the thread. The thread was given so that each master makes his own kind of garland. You can put flowers on it, or beads or pearls or diamonds. The thread is vital but that is not a goal by itself.

Unless you are exposed to the culture, it is a little difficult to understand what kind of mind Patanjali is. Even though the Indian scriptures like the Vedas and the Upanishads are quite phenomenal by themselves both in terms of grammatical excellence and in their poetic beauty and content, the Yoga Sutras are an absolutely brilliant piece of work compared to any of the scriptures on the planet talking about life and beyond.

They are a tremendous document about life and the most uninteresting book on the planet. It is the driest and dullest book you can read. It is not scholarly in the usual sense. Patanjali does not teach any practice in them. He did this intentionally, and his mastery over language and composition was such that he wrote it in a way that no scholar would be interested in it. The idea is, this is a formula to open up life. If people like the poetry and literary part of it, all kinds of people, especially scholars, will read it. Once they read it, they will make a 100 different interpretations of it.

The sutra will mean something only to a person who is in a certain level of experience. Otherwise it is just a bundle of words which don't make any sense. Someone who is exploring his consciousness, if he is in a certain state of experience, if he just reads one sutra, it will be explosive. You are not required to read the whole book. If you read one sutra and make it true with your life, that’s enough. It will realize you. 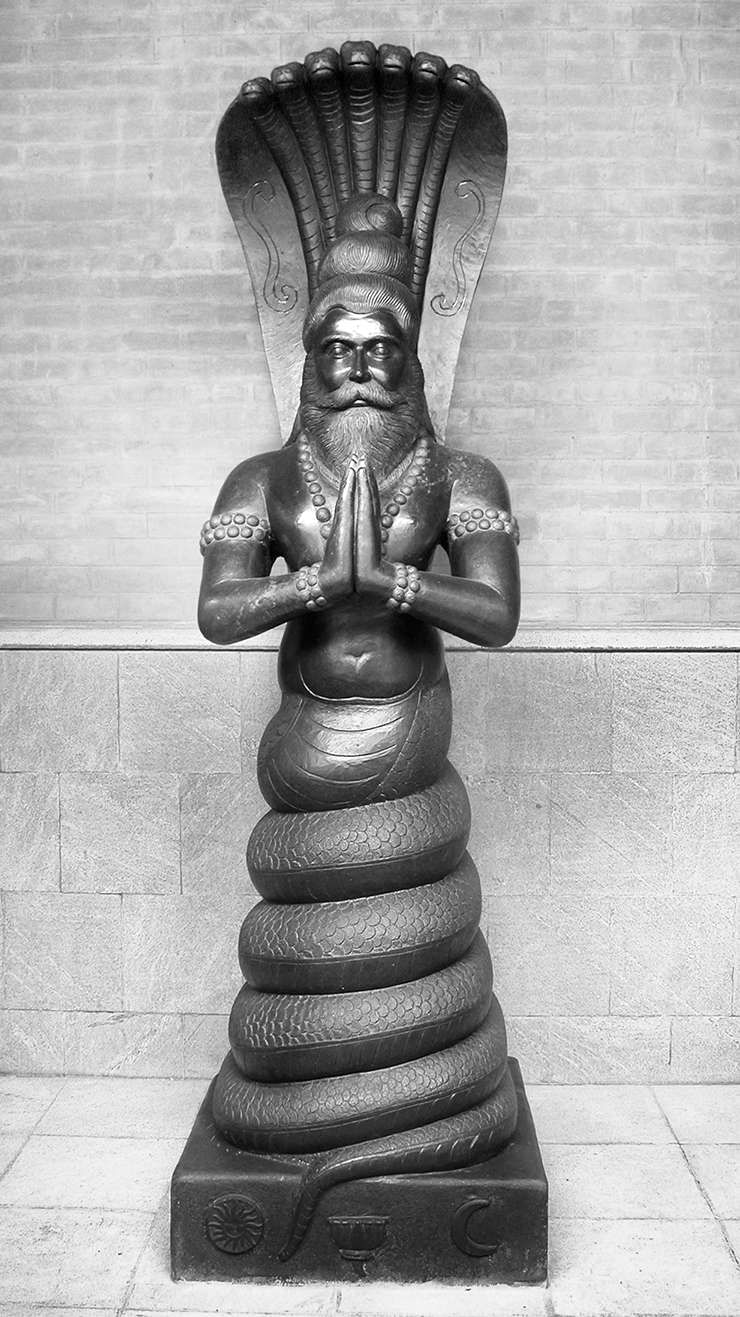 Just to give you some sense of what kind of a man he is – he starts such a great document of life in such a strange way: the first chapter of the Yoga Sutras is just half a sentence, not even a full sentence. The sentence is like this, “And Now Yoga.” What do you make out of it? Intellectually, it doesn’t make any sense, but experientially what it is saying is, if you still think that building a new house or finding a new wife or getting your daughter married will settle your life, it is not yet time for yoga. If you have seen money, power, wealth and pleasure, you have tasted everything in your life and you have realized that nothing is going to fulfill you ultimately and work in the real sense, if you have gotten that point, then it is time for yoga. All the nonsense that the whole world is involved in, Patanjali just brushes it aside with half a sentence. This is why the first sutra is “and now yoga.” That means, you know nothing works and you do not have a clue about what the hell this is. The pain of ignorance is tearing you apart. Now, yoga. Now there is a way to know.

It is improper to call Patanjali’s Yoga Sutras a book because it is not a book. It is a complex arrangement of tools – such fantastic tools arranged in such a brilliant way that if at all something similar ever happens, it is too far away. Because someone with that kind of inner experience usually would not care or bother with scholarly nonsense. And someone who is so scholarly is usually so lost in his scholarship that he never has any inner experience. Never before has there been one person with an absolute depth of inner experience, but with that kind of erudition and scholarly mastery over language.

He just understood humanity inside out – not as people but as a total mechanism of the human body, human mind, human consciousness – everything – in such absolute detail and completeness. There is simply no better way to look at it. It is not fair actually because whatever you try to say, the guy has already said it! You think of the most brilliant idea and try to say something, but he has already said it. He did not leave anything for anyone to say about life.

They say he played a variety of instruments and was a great musician and singer. The veena was one of his favorite instruments and he composed many ragas. His intellect was such that he could find a way through anything. He was absolutely audacious in everything and did things in a challenging way that no one could break through.

There was another sage Vyagrapada who was his contemporary. Vyagrapada means “one who has tiger’s feet.” And there was someone else with a name that meant “one with horns on his head.” Once, in their banter, they got into an argument and teased Patanjali. He then took a challenge that he will compose music in any raga without using alphabets with “horns.” This is almost impossible but he composed a complicated series of music. If you listen to it, you will just see it seems impossible, but still the music sticks to the tones and tunes of the ragas without those alphabets. It is so incredible. That is the kind of man he was.

In South India, there were five lingas created for the five elements in nature. Patanjali consecrated the linga for space which is in Chidambaram.

In the yogic system, the snake is used as a symbolism for unmanifest energy or kundalini because till it moves, you don’t even realize that it is there. Patanjali was such a great being, for him divinity is not an upward movement. He is a cascade of divinity. He is a kind of human being that gods would be envious of. He is symbolically depicted in the famous half-man, half-snake form indicating that he has risen above the duality of life and attained to ultimate oneness, and in doing so, has opened the door for others to achieve the same. Half of his body has been symbolically made into snake, because he is not seen as a person anymore. He is seen as the very basis of the yogic system.

Patanjali defined yoga as Chitta Vritti Nirodha, which literally means that if you still the modifications and activity of the mind, you are in yoga. Everything has become one in your consciousness. We may be pursuing many things in our lives and going through processes that we call achievements, but to go beyond the modifications of the mind is the most fundamental and at the same time the highest achievement one can attain, because this releases a human being from what he is seeking – from what is within and what is outside – from everything. If only he stills his mind, he becomes an ultimate possibility. The mind becomes a plain mirror, not a wavy mirror. A wavy mirror will distort one’s whole perception of life. At least if you don’t look at it, you may have some idea how you are, but if you look at it every day, it will give you a completely distorted vision of everything.

This is the reason why, of all the beautiful ways in which it could be expressed, Patanjali chose the description Chitta Vritti Nirodha for yoga – a technology which can take you towards your liberation or realization.