Life in Sadhanapada: Do Spiritual People Have All The Fun?

Celebration is a core part of life in the ashram. Read how Sadhanapada participants discovered this aspect of spiritual life through games, Navratri, Sadhguru Jayanti and Garba.

Over 800 participants from 32 countries come together to spend 7 months in the consecrated space of Isha Yoga Center for their inner growth.

Life in Sadhanapada - All Articles

Sadhana and fun may not seem like two words that belong in the same sentence. The word “spiritual sadhana” often conjures up images of loincloth-clad hermits in body-breaking postures, uninterested and uninvolved with the world around them. After almost two months of Sadhanapada, we can safely say that the participants find this myth firmly and forever busted.

Sadhana is about bringing a deep involvement with life. This can be cultured in so many ways, but celebrations and games are by far the most fun approach!

It’s So Easy to Be Involved in Festivals

“The first few weeks that I was in the ashram, my clothes kept getting muddy. And I was getting angry, because every time I'd wash them, two hours later they would get muddy again! And then we went for a celebration in the playgrounds and I got pretty well mudded. I thoroughly enjoyed it because everybody was participating joyfully, and it was so easy to be involved. Today I actually tried to wash my shirt thoroughly, but I looked at it and it's still got mud all over it. I laughed and said, "Oh, what can you do?” – Baran, 35, Melbourne, Australia 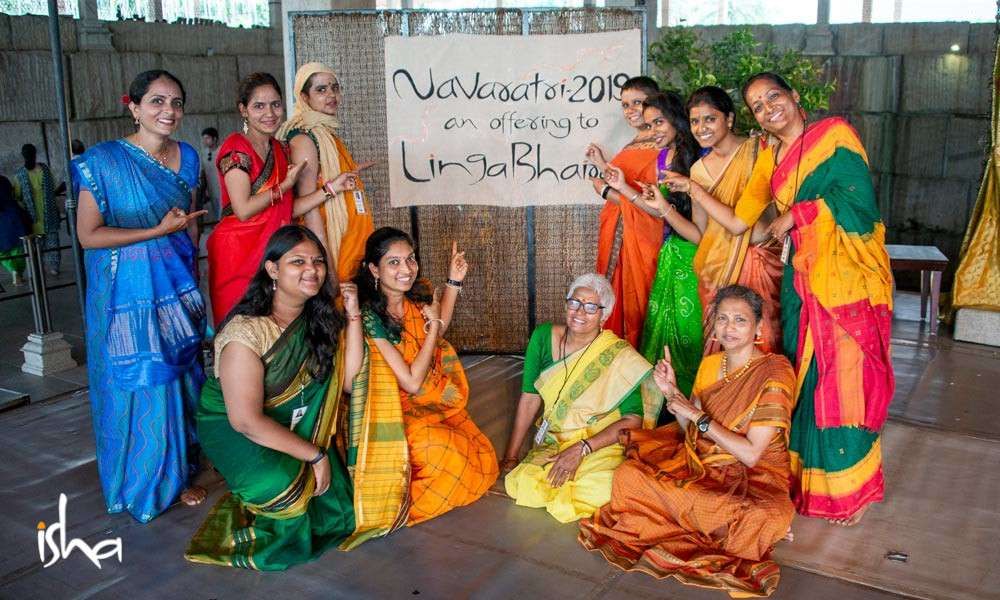 Consecrated by Sadhguru in 2010, Linga Bhairavi is a powerful and fierce feminine form. A source of vibrancy and wellbeing, Devi’s presence has added a splash of color to every aspect of ashram life.

On the auspicious and spiritually significant period of Navratri, the Navratri Sadhana at Linga Bhairavi is a specially designed process that makes one receptive to the grace of Bhairavi. For most Sadhanapada participants, these nine days were their first brush with large-scale ashram celebrations. Many shared how they “came to life,” with the festival.

“On the first day of Navratri, the whole ashram seemed to be clad in red Devi shawls. Excitement was electric in the air as it usually is during any event conducted by Isha. After a long dip in Suryakund, we rushed towards Linga Bhairavi as the evening started to set in. The place was vibrantly decorated with rice, turmeric, kumkum, coconuts and several other offerings that I could not identify. The musicians were signaling each other in hushed gestures, preparing for the evening medley. As we settled down, a faint ringing of ghungroos (anklet bells) announced the arrival of the dancers.

Finally the closed curtains were drawn, and behold! Overshadowing all the festivities, Bhairavi Devi stood at the far end of her abode, grand and imposing. Her many hands were decorated with bangles and her usual midnight black body was smeared a vermillion red. It felt as if she had revealed her true form. The Navratri Sadhana progressed with ever increasing intensity and culminated with the Devi Arati. When I got up to leave, I was in a completely intoxicated daze.” – Saurak, 22, Maharashtra, India

In the Garb of Garba

The traditional Gujarati dance of Garba is performed in full gusto during Navratri nights and the Sadhanapada participants wasted no time in joining the festivities. On 4th October, everyone descended as one effervescent and colorfully dressed mass to learn the steps of Garba and dance the night away.

Learning to throw yourself into any activity with abandon is a crucial aspect of living in the ashram and dancing the Garba is no exception. Dance teaches one to be fluid and involved, preparing one to approach the spiritual process with abandon.

My Favorite Part of the Celebrations

“When the Swamis play the drums here, it just takes me right back home. It’s almost like an African beat. That is actually my favorite part of the celebrations. When the people just start jiving, I’m like, ‘YES! This is what I’m talking about, man!’ I love that aspect.” – Sibusiso, 24, South Africa

“This is the first time I am celebrating nine days of Navratri and I am thoroughly enjoying every aspect of this celebration. On the first day I couldn't control myself from dancing to the folk music. I had never imagined that I will enjoy the classical dance and music. I don’t even know how to dance, but every night I go to Adiyogi Alayam for Garba.” - Eliza, 38, Odisha, India

No Compromising My Morning Sadhana

“I’ve been totally involved in the whole process, including doing Garba every single night! The experience of it has been thoroughly enjoyable, exhausting, stressful, and there were also some things to learn from the whole process. I threw myself fully into it and, at the same time, did not allow the daily exhaustion to compromise my morning sadhana. It feels like a victory!” – Sheetal, 42, Uttar Pradesh, India

“On Sadhguru Jayanti, I was serving in Biksha Hall and was excited to hear that we were expecting 3000 people for lunch. Initially I was a little hungry and looking at the Mysore pak and the variety of dishes that were to be served was making me hungrier! But as I saw people coming in and I started to serve, their hunger became a priority for me, and I happily served. It felt similar to serving my own family and friends. When I saw the ladies I used to work with for tree care coming for food – all dressed up – joyfully serving them was a moment I will cherish for life.” – Chaitra, 24, Karnataka, India

Letting go of one’s self-created walls happens naturally and effortlessly as we learn to approach life playfully. One being whose life was a perfect demonstration of playful involvement was Krishna. So it was only fitting that we celebrated his birthday with the same sense of joy and dynamism.

The Sweetness of Krishna

“The Krishna Janmashtami celebration was a special day for me because this inner sweetness that I feel whenever I hear the sound ‘Krishna’, blew like a cool and fragrant breeze in me. I noticed that especially those things I have the most resistance to or find challenging are the things that I have to approach with more playfulness.” – Mikus, 32, Riga, Latvia

I Danced in Complete Abandon

“The Krishna Janmashtami celebrations were just so beautiful. The games opened me in such a way that I was just in that moment and I laughed my stomach out as if I was a child. I was able to experience the innocence within me during those celebrations, during the games part of it. I was also able to dance like I never did before, in complete abandon. It was so colorful. I was able to bring out a childlike playfulness in me.” – Tinali, 31, Maharashtra, India

Games – An Integral Part of Isha

Games have been an integral part of Isha right from the very first Yoga program conducted by Sadhguru. A perfect way of breaking down barriers and enabling people to joyfully come together, even a simple game can leave one energetic and enthused. It is impossible to play a game without total involvement!

“Playing games in the Nalanda grounds reminded me of how we used to play as children, and how carefree we were. I really enjoyed the running games – kho-kho and chain-chain – it made me more alert and fresh for the next task. I was extremely involved and nothing else occupied my mind at that particular moment when I was playing. I don't think anyone was even slightly uninvolved. Even if someone was not playing, they were still excited enough to cheer and enjoy along with us.” – Purnima, 30, Karnataka, India

People come to the ashram to pursue their spiritual path, which sets a refreshingly different context for working together. Unlike a corporate workplace where one’s worth is measured by their productivity and output, in this space, one is encouraged to be conscious and use the Seva as a way to offer oneself.

But when you are getting bogged down with Seva, along comes a merry band of (mostly makeshift) musicians armed with drums and jingles – doing Damaru Seva – to liven you up and dispel any monotony that may have set in from the work you are doing.

Not Just Another Workspace

“The first time I heard drums playing live around my Seva space, I was so thrilled. They come at the right time during the day, lighten my mood and awaken me from my mid-day dullness. It reminds me not to take everything dead seriously. Also, I noticed that my entire team naturally feels uplifted. This should be a part of every workplace.” – Harluvleen, 28, Ontario, Canada

A Celebration of a Different Kind

“The celebrations in the ashram are quite different from how they are back home. I found that the cultural difference is a big aspect. Back home in the Western world, everybody turns up to the party as individuals, and there always has to be food and alcohol involved. Everyone sort of goes around in their little groups of who they know - ‘I know these people, I'll talk to them and stick with them, but I won't talk to those people.’ It’s not like that here in the ashram. Everybody just comes together and merges into one joyful flow.”– Baran

Every Purnima night, the lights are switched off, so everybody can head outside and bask in the cool glow of the full moon. Meanwhile, the grand Linga Bhairavi Maha Arati happens in front of Dhyanalinga, and later in the night, a music concert by Sounds of Isha only adds to the festive spirit.

Stevan, an alumnus from Sadhanapada 2018 shares his fond memories of this monthly festival:

“During Sadhanapada, I really enjoyed Purnima days. Every full moon, we would come together and have food at the grounds outside and there would be a procession which also included a magnificent fire dance. It was awesome!” – Stevan, 22, Germany

Learning Not to Be Serious About Life

Sadhguru: “If you approach everything in a celebratory way, you learn to be non-serious about life but absolutely involved. The problem with most human beings right now is, if they think something is important, they will become dead serious about it. If they think it is not so important, they will become lax about it – they don’t show the necessary involvement. You know, in India when someone says, “He is in a very serious condition,” that means his next step is you know where. A lot of people are in a serious condition. There is only one thing that is going to happen to them which is of any significance. The rest will bypass them because with anything that they think is not serious, they are unable to show involvement and dedication towards that. That is the whole problem.”

As the sadhana begins to have its impact and we observe people becoming more steady and balanced, it is now time to intensify the sadhana!

Editor’s Note: Find out more about Sadhanapada and express interest for the upcoming program here.