Gorakhnath was the steadfast disciple of Guru Matsyendranath, who established the Nath tradition. Here Sadhguru narrates a few incidents of Gorakhnath’s absolute devotion to his Guru and how that often became an impediment in his own growth.

Great Beings is a series of articles about enlightened masters who have enriched the world through their presence. Sadhguru shares his insights into some key aspects of their lives and what we can learn from them.

Sadhguru: Gorakhnath was a highly accomplished yogi. In the whole history of the Yogic culture, he is a star who stands out in many ways. Gorakhnath’s Guru was Matsyendranath, who was a great Yogi and is generally referred to as an incarnation of Shiva. It is not that Shiva was born again. We call him an incarnation because in terms of his knowing and capability, he was not very different from Shiva. After all, we are interested in Shiva for the qualities he possesses, not for the man. Matsyendranath was very close to that, so people said that he is Shiva himself. Gorakhnath was his very close disciple, who later became a legend by himself – one of the most well-known Yogis in the country. Gorakhnath did a phenomenal amount of work across the subcontinent. There is almost no one in India who has not heard of him.
Gorakhnath was the kind of man who can change the world. He had that kind of capability but he was too much fire that is not stabilized and channelized.

Gorakhnath’s path is one of the biggest sects among the Yogic traditions even today. It has the maximum number of nathis and they are into very intense sadhana. It has broken into various groups but they are still a very fierce band of people. 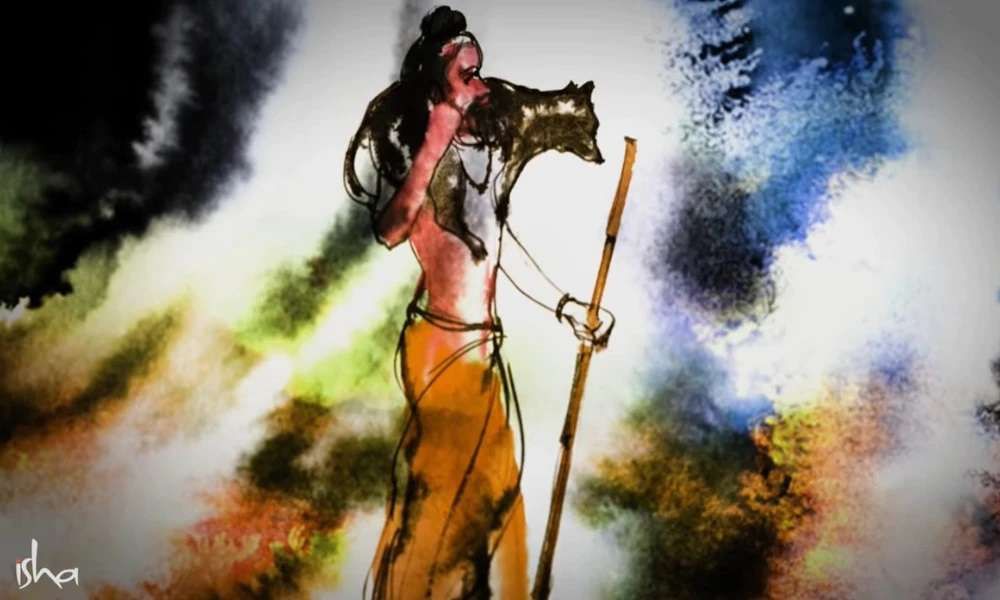 Gorakhnathis always carry a stick and a dog with them. Their dogs are pitch black in color. They will not have any other color dog. And they love their dogs so much. They keep them well fed and will not let them walk – they carry their dogs on their shoulders and walk for hundreds of miles. Gorakhnathis are generally known to common public as kanfats. Kanfat means “a hole in the ear.” People call them this as they usually have a huge hole in their ear lobes.

Gorakhnath was the kind of man who can change the world. He had that kind of capability but he was too much fire that is not stabilized and channelized. There are a whole lot of stories of how Matsyendranath tempered Gorakhnath's love for him, how his fierceness of love just drove him beyond all discipline many times and how Matsyendranath constantly controlled it in so many different ways because he knows the potential of the man.

Story #1 - When Gorakhnath Misused His Occult

Gorakhnath was fiercely devoted to his Guru. Matsyendranath saw this young man was becoming very fierce. His love for the Guru was so intense that he was becoming like a soldier, not like a Yogi. He told him to go away into the Himalayas and do fourteen years of sadhana. So he went away. Gorakhnath was made in such a way that for him all this sadhana and everything he does is only because the Guru says so. For him, the only thing was his Guru. He is fiercely dedicated to his Guru. When he sat in the Himalayas for fourteen years, every day, every moment, he was only counting the moments when these fourteen years would get over so he could go back to his Guru. At the same time, he did the sadhana and because of these fourteen years of sadhana, he acquired many possibilities. He did not use it but he knew the possibilities. Then he came back to the mountain, which is the beginning of the Western Ghats, just about 200 kilometers south of Mumbai. Now that mountain is named after him as Gorakhnath Mountain.

"You misused your power to do this, so you go away for another fourteen years because you have found the lowest expression to the Yoga that I gave you.”

You must understand the whole setup. It is not like he came to Delhi and flew to Mumbai and then drove. He walked all the way up to Himalayas, stayed there for fourteen years and walked all the way down with just one fierce thought and emotion that he wants to be in the presence of his Guru. That is not a small exercise, to go up Himalayas, wait there for fourteen years and come back all the way walking down. When he came, just outside the cave in which Matsyendranath was staying, there was another Yogi, a disciple, who was manning the entrance.

Gorakhnath came and he wanted to see his Guru. The Yogi said, “No, you cannot enter.” Gorakhnath immediately flew into an intense rage and said, “How can you stop me? I have been waiting for fourteen years, you cannot stop me. Who are you?” That Yogi said “It doesn't matter who I am, you cannot enter and I have no intention of letting you pass.”

Gorakhnath got really angry, pounced upon that man, put him down physically and entered the cave in which his Guru was supposed to be staying. When he went in, it was empty. Then he came out weeping and asked, “Where is he?” The Yogi said, “I have no intention of telling you, you are too crude.” Gorakhnath begged him. He refused. Then using his occult power, he read the other Yogi's mind, found out where his Guru was and went straight there. The moment he came there, Matsyendranath knew how he had come to know. He told him, “The first opportunity you got, you misused the sadhana I gave you to enter the mind of your brother Yogi. You had no business reading his mind. You misused your power to do this, so you go away for another fourteen years because you have found the lowest expression to the Yoga that I gave you.” Because occult is the lowest expression of Yoga. That is the first thing that people would like to do. They want to see or do something that others cannot do. In the Yogic language he said, “You expressed yourself through the Muladhara. So, you block your Muladhara and sit for another fourteen years.”

Gorakhnath went back and sat in what is now famous as Gorakhnath asana – a very torturous asana. He put his left heel to his perineum, or Muladhara, and sat on the toes of his left foot and put the right leg over the left thigh and sat like this for fourteen years of sadhana. He sat blocking his Muladhara continuously so that he never again finds expression in the lowest way.

Story #2 - When Gorakhnath Tried to Save His Guru

One day, Gorakhnath saw that his Guru Matsyendranath went to Assam to see someone, and then he did not come back. In his vision he saw that his Guru is into physical pleasures. He was aghast – “How could my Guru be in this condition?” So he went walking from the west coast to Assam, which is more than three thousand kilometers away. He walked all the way, and there he found his Guru sitting in a prostitute’s house, fondling two women in his lap, seeking physical pleasure. He just could not believe this. He thought, “How could this happen to Matsyendranath? He is Shiva himself.” Gorakhnath has experienced Matsyendranath in so many powerful ways, but here was this man, sitting with two prostitutes!

He was so heartbroken – “What has happened to my Guru?

Then Gorakhnath told him, “You must come,” and he scared the prostitutes away with his fierceness. He drew his Guru out and brought him along. On the way, Matsyendranath went for a bath in a river. He gave his handbag to Gorakhnath and said, “Take care of this. It has something very precious,” and went. The bag was too heavy, so Gorakhnath just opened it and saw two big bars of gold. He was so heartbroken – “What has happened to my Guru? First with the prostitutes, and now he is collecting gold! If he wants he can piss on the rock and make the whole rock into gold; he has that much occult in him. But this man is attached to two bars of gold. Why?” And he took these two bars of gold and threw them into the forest, and then they walked back.

Gorakhnath was in great distress that his Guru is getting lost, and now he is feeling proud that he walked three thousand kilometers to save his Guru from being lost. When this pride came into him, Matsyendranath put his hand on Gorakhnath’s head, and suddenly Gorakhnath realized that he was sitting right there. Neither did he walk to Assam, nor did he see the prostitutes, nor did he see the gold – nothing. It was all happening in his mind. But it all was real for him – he had actually walked, gone there and saw it. All this had happened because of the occult of the Guru.

Matsyendranath had created everything around him, in reality. And Gorakhnath was absolutely broken – “I did all this. I imagined that my Guru was with prostitutes. I imagined my Guru was lusting for gold.” He was in total distress. Then Matsyendranath said, “It is okay. At least you are willing to walk three thousand kilometers to save me. That is great for you; keep that going in you.”

He brought the water – bursting with ecstasy, jumping with joy – and gave it to his Guru. Matsyendranath kept the water aside and did not drink.

Gorakhnath is the kind that if you tell him to do a mantra ten times, he will do it 10,000 times. He is always on the go. Whatever you tell him, he will do it with great fervor, which is a great quality, but now a time had come for him to move into another space. So Matsyendranath was trying to tell him “You have done very well with all the running around and the intense activity, but the time has come where you just need to wait, and the mind will become crystal clear.”

Great Beings
Guru
Devotion
Intensity
Yoga
Shiva
Wisdom
Related Content
article
Dissolving into the Soundless
Sadhguru on words, sounds, society and dissolving into the soundless silence.
Oct 30, 2016
article
11 Intriguing Buddha Stories by Sadhguru
Here is a collection of Buddha stories that Sadhguru has told over the years to elucidate certain aspects of the spiritual path and to offer inspiration from Gautama’s own life and journey.
Mar 31, 2021
article
3 Kinds of Yogis
Sadhguru talks about three broad categories of yogis – Mandha, Madhyama and Uttama.
Jul 11, 2019
Close