December 5 is World Soil Day. We take a look at how a few farmers have transformed their lives through a few practices that help them make more money, grow healthy food and save the soil.

A child’s illness is always a nightmare for a parent. Farmer Ponmuthu was no exception. Frequent bouts of sickness were taking a heavy toll on his children’s health, and he and his wife were a worried couple. The pain and suffering his children were going through was only one aspect. Ponmuthu’s troubles were compounded by the cost of medical care. Being a small vegetable farmer, he was barely able to make ends meet on a good day. When illness struck his children, he and his wife would scratch together whatever they could. 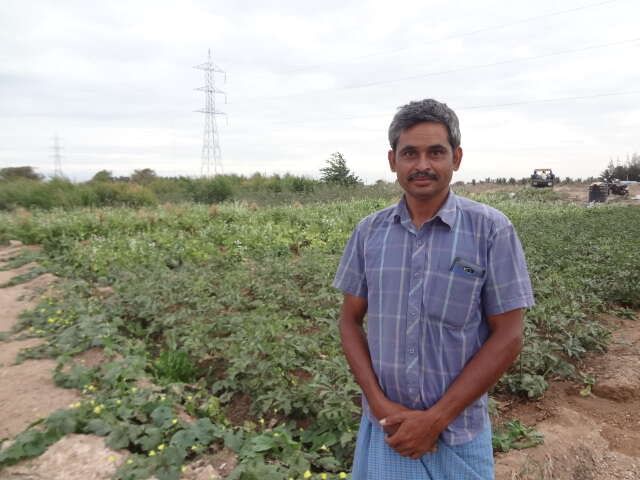 The cause of this illness was not far away. In fact, it was Ponmuthu’s own hands. “I used to spray the pesticides in my farm by myself,” explains Ponmuthu. “And when I returned home, though I washed my hands properly, I was always worried in the back of my mind when I played with my children or fed them.” Ponmuthu’s hands were the culprits, but his hands were also tied. “I was always looking for a solution,” he explains. “But there was no way out.”

In India, the dominant paradigm of agriculture is chemical-based. Fertilizers are pumped into the soil in copious quantities and pesticides are sprayed without check. Farmers are often so poor that they cut costs by spraying pesticides themselves. Protective clothing and gloves are not even on their radar.

One would think all this “treatment” to the farm would make farming a profitable enterprise. The truth is unfortunately very different. The costs of these chemical fertilizers and pesticides are high. Though crop yields may be high for the first few years, they soon taper off to low levels as the soil loses all its strength. This forces the farmer to pump in more chemicals to raise yields, which in turn increases costs further.

Pests also begin to develop resistance to the chemicals, requiring more or different pesticides. Every season brings a downward drop in income but a rise in costs for the farmer. Very soon, the farmer is stuck with a barren farm, debt, and a hopeless future. Little wonder then that 300,000 farmers have killed themselves in India since 1995.

But farming in India has been practiced for thousands of years and large-scale farmer suicides are only a recent phenomenon. So how did farmers manage in the past, before agriculture became an industry? The answer lies in bullshit.

The politically correct term today would be organic cultivation or natural farming. But it’s actually bullshit – of the useful variety! Animal waste – including bullshit, cow dung, goat dung etc. – makes soil very fertile when applied in the right manner. So does waste from trees such as leaves and branches. Animal and plant waste add much-needed carbon to the soil, among other elements, which not only improves soil’s fertility, but also its water absorption capacity.

Rattan Lal, Distinguished University Professor of Soil Science at Ohio State University and Head of the Advisory Committee to the UN’s Institute for Integrated Management (UNU-FLORES) explains the trouble with Indian agriculture right now. “The land gets nothing back, the soil is depleted,” he says, referring to the farmers’ habit of harvesting the crop, and then burning of the root and stem rather than putting it back into the land. “Carbon content in the top soil should be 2% per 100 gm of soil. But in Punjab, Haryana and Uttar Pradesh -- the granary of the country -- the carbon content in the top soil is a mere 0.05%,” says Lal.

Making Changes At No Cost

Such minutiae of soil science were of course not available to Ponmuthu, though he was acutely in need of them. Though India has several agricultural research institutes, the science frequently gets lost in translation and dissipates somewhere along the way to the farm.

However, several organisations, including Project GreenHands (PGH) have been working to bring natural farming methods back to India’s farms. In 2015 Ponmuthu attended a workshop by Subash Palekar on natural farming, organized by PGH. Mr. Palekar’s method involves chemical-free, natural farming that cost the farmer nothing. It is a holistic, integrated farming methodology where the farmer is not dependant on anything outside his farm.

Natural methods are used to retain and improve soil health, control pests, and increase yields. A farmer will also be able to produce his own seed, and natural fertilizers are created using cow dung, cow urine and other materials. According to Mr. Palekar, one native cow is all a farmer needs to take up this method of farming on thirty acres of land.

The results are there for all to see. Mr. Palekar’s methods have found success across the country, and he was awarded the Padmashri in 2016 for his efforts. On a more personal level, Ponmuthu is a much happier man after he changed his farming techniques.

"When my children were consuming the chemically-grown vegetables from my own farm, they used to fall sick a lot. Now after eating organically grown vegetables, they are very healthy and are not falling sick at all."

Ponmuthu explains the modus operandi he follows based on the natural farming technique, “I grow onions, and in between them, I intercrop radish, beetroot and chili. I also do relay cropping, so when the radish is ready for harvesting, the tomato has just started fruiting. This ensures I have sustained income throughout the year. With the relay cropping method, infestation of insects and the probability of crops getting affected by disease is lesser.” Besides these benefits, he is also receiving better prices for his produce at organic produce shops.

But perhaps closest to his heart is how his children’s health has changed. “When my children were consuming the chemically-grown vegetables from my own farm, they used to fall sick a lot. Now after eating organically grown vegetables, they are very healthy and are not falling sick at all. To be honest, in the last nine months, the medical expenses have been nil!”

A Ray of Hope

Similar miracles are taking place in other farms! Devi, a woman with a small onion farm says, “A ray of hope entered my life in the form of Palekar ji. When I was engaged in chemical farming, for a 70-day crop of onion, I used to add chemical fertilizer thirteen times. I was not making money because the expenses were almost equal to whatever income I would get. In fact, sometimes I had to invest money from other sources.” No surprise that Devi often wondered if agriculture was worth it or if she should just give up.

But natural farming has changed all that. Besides the higher incomes as with Ponmuthu, Devi also mentions other benefits. “When onion is grown using chemical means, it starts rotting in 15 days. But with natural methods, it stays for as long as 4 months. The requirement and expense of water has also reduced. And even if there is a delay in watering the crops, the plants do not wilt as they used to earlier.” Devi’s farm has become a bit of a cause célèbre in her area – beginning with her husband. “My husband who is a driver is now very eager to devote his spare time in the farm. Many people have been coming to my farm to see the methods we are using.”

Besides improving soil fertility, natural farming techniques are very effective at combating pests. Jagadeesh, another recent entrant in the natural farming family explains, “Thrips – millimetre-sized insects that feed on the plant’s tender leaves and buds – are a common problem in chemical farming. The general belief is that if pesticide is not used, you cannot save the crop from thrips.” But Jagadeesh has kept his onion crop thrips-free using the neem-seed solution recommended in natural farming techniques.

Devi mentions another reason why natural farming keeps pests away. Since natural farming recommends multi-crop fields rather than single-crop monocultures, she says, “There are ragi and other millet crops growing in my onion field, so a lot of birds come to eat them. These birds also eat many of the pests.” Techniques such as relay cropping also help.

But most of all, organic farming has made farmers feel that agriculture is something that is worth pursuing. “I am happy that my children get to eat organic vegetables and I am also able to offer this to people,” says Ponmuthu, while Devi reflects on how natural farming has changed the way she looks at agriculture. “Natural farming has given us the confidence that we will be able to make a successful living practicing farming.”

Let’s Save Our Soils

We take soil for granted, but the thin layer of top soil on the planet is the source for almost all our food. Take it away and you can imagine the result! And it is being taken away in enormous quantities. Bad agricultural practices lead to massive soil erosion – India alone loses 5300 million tons of soil a year – and chemical-based farming poisons what’s left.

If we want the generations to come to have any sort of food security, preserving the quality of our soils is a must. Natural farming techniques where agriculture works as a sustainable process rather than a “loot and scoot” process are key to this.

Saving our soils is also part of Isha Foundation’s Rally for Rivers initiative. Rally for Rivers’ policy draft recommends that farmers be supported to shift to natural, tree-based agriculture that is more profitable for the farmer, and beneficial for soils and rivers. Rally for Rivers has begun a large-scale pilot project in the Yavatmal district of Maharashtra, and has also signed MoUs with five other states to implement similar programs.

PGH’s Isha Agro Movement also offers natural farming training programs. The next English/Tamil program will take place from February 2-10, 2019 in Trichy, Tamil Nadu. This will be a nine-day Subhash Palekar Natural Farming (SPNF) program. It will be conducted in English with live translation in Tamil. Participating farmers will be fully trained and capable of practicing on their own on completion of the workshop. Download the Program Form for more details.

If you’re not a farmer and just want to get involved in saving our soils/rivers/trees/planet earth, visit RallyforRivers.org and ProjectGreenHands.org to find out how you can volunteer in various initiatives.

“Agent Orange”, a poisonous chemical used to clear bushes and find enemy hideouts in the Vietnam War, is now used in many developing countries as a herbicide. This is despite the fact that this chemical is suspected to cause prostate cancer, respiratory cancers, multiple myeloma, type II diabetes mellitus, Hodgkin's disease and many more ailments.

Zyklon B, the chemical used by the Nazis in their infamous holocaust gas chambers, was originally designed for use as a pesticide. It is not used anywhere in the world today.

Pesticide consumption in India increased from 2330 tons in 1950 to 81,000 tons in 2010-11, drastically increasing the prevalence of these chemicals in the food chain.

In a study in Sweden, when a family ate organic food, the concentration of pesticide residue in the body decreased on average by a factor of 6.7, compared with the period when they consumed conventionally grown food.