Can Your Photo Be Used to Affect You Negatively?

In today’s world of smartphone cameras constantly capturing selfies and snaps, it seems unthinkable to shy away from a photo. However, says Sadhguru, in certain consecrated spaces and cultures, taking a picture might be an unwelcome act. He explains that for those who understand the geometry of a photograph, just an image could prove to be an invitation for negative influence.

Q: With the technology people have now, they are used to taking snapshots, using Instagram and all these things. But in many cultures that are not as exposed to this modern technology, they are nervous about having their pictures taken because they think that a photograph can steal their soul. Does having your photo taken impact your system in some way?

In India, if you go to a black magic artist, he will just ask for a photo because a photo is a certain geometry. If you understand the geometry of a person’s picture, you can create a geometry which will enhance him, or you can create a geometry which is going to destroy him in some way. Because of this, in those cultures where this awareness is there, people do not want their pictures to be taken.

The Geometry of a Photograph 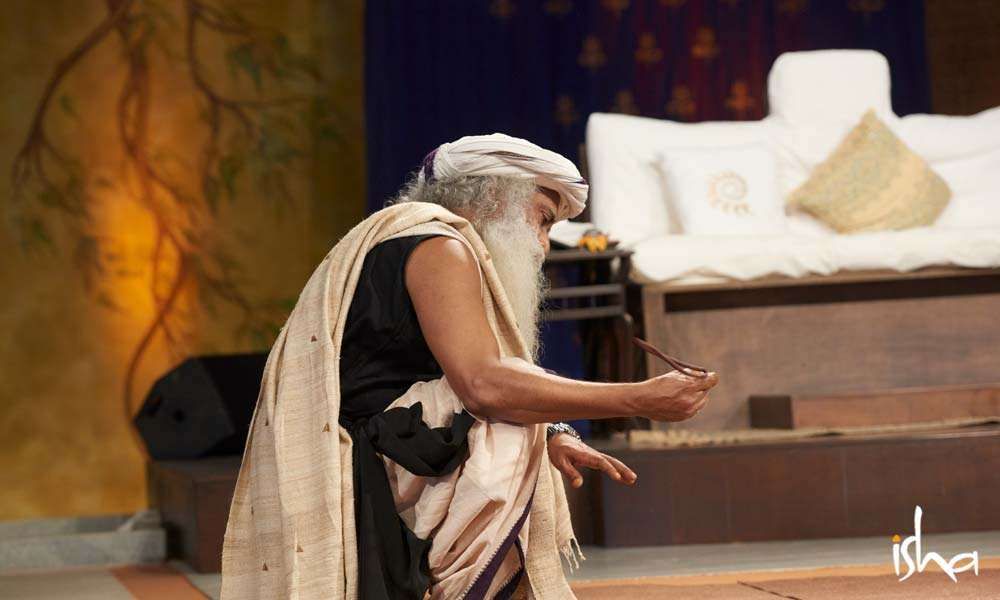 There are certain pictures where I am in a certain state when pictures have been taken. Take an image like this, even if it is folded, so you do not know what is there, and then you create a few placebo pictures – an empty page, a grasshopper or a tree – mix them all up so that you cannot see what it is on the surface. If you have been meditating for a certain point of time and you touch each one of them, probably many who have been initiated by me will immediately recognize which is my picture.

If they simply touch it, they will know, because even the two dimensional or flat surface of the picture has a unique geometry which it is exuding. If somebody knows how to read this geometry, he can create a geometry either to enhance you or to create trouble for you.

Another aspect is, in India, in certain types of temples, they do not want pictures to be taken. One reason is because the deities are consecrated in a certain way. For example, there are two different dimensions of the divine feminine: Kali and Gowri. Kali does not want pictures taken because a lot of work has been done for her to exude the strength of darkness.

Do not understand darkness as in the Western context, as something evil or some force which is going to damage you. Darkness means the basis of creation. If you look up at the sky in the night, maybe the stars are what catch your attention, but the biggest thing in the night sky is darkness. Creation has happened out of this darkness. So, when a deity is consecrated as Kali or Kala, having pictures taken could have an effect.

Photos of Linga Bhairavi and Dhyanalinga

But if you take pictures of Linga Bhairavi, though she is Kali, there is absolutely no impact on her because she is consecrated in a certain way. What you do around her will not impact her way of being. If the fundamental things that need to be done for her are taken care of, the rest of the things do not really affect her.

In Dhyanalinga, we do not allow people to take pictures, but that is not because he will be affected by this in any way. It is simply because we do not want to turn the temple into a tourist place. Satsangs are already turning into a tourist place because half the people are busy taking pictures! We do not want that to happen in the temple, so for this social reason we stop it. But Dhyanalinga will not be affected by that, and neither have I been depleted because of constant photography!

Editor's Note: Find more of Sadhguru’s insights in the book “Of Mystics and Mistakes.” Download the preview chapter or purchase the ebook at Isha Downloads.

Energy
Tantra
Linga Bhairavi
Yoga
Wisdom
Related Content
article
Goddess Kali – The Fierce One
What is the significance of goddess Kali and her fearsome depiction? Sadhguru speaks about the origins of Kali.
Sep 20, 2017
article
Raghu Rai Clicks Sadhguru
I really don’t know how many pictures people have taken of me. It should be in the millions. But Raghu Rai’s pictures are significant because in some of them he captured something that no one ever has before.
Jul 2, 2019
article
How to Change Your Life: A New You for the New Year
It’s the new year. Do you need a new "you”? Sadhguru offers a powerful process to change your life, and create a powerful sense of inner wellbeing to carry you through any sort of external situation.
Dec 29, 2014
Close