On Krishna Janmashtami, learn the story of Krishna's birth and how he was taken away from the prison where he was born, across a flooding river and to Yashodha.

Sadhguru: Krishna as a man, the mission that he took up in his life, the frailty of being a human being living such an active life and at the same time, the divine element – all these aspects form a complex web. It is not right to see him just as this or that. He would come out as a totally distorted figure if you were looking at just one aspect of his life. He is so multi-dimensional that unless you at least touch a little bit of all of him, it would be total injustice to him.

The Place Where Krishna Was Born

Geographically, his birth took place in Mathura, in the present state of Uttar Pradesh. There was a prominent chief of the Yadava community named Ugrasena. Ugrasena was becoming old and his very ambitious son, Kamsa, who had no qualms about how to become powerful could not wait for his father to die. He imprisoned his own father and took over the leadership. He also aligned himself with an absolutely ruthless emperor from the East whose name was Jarasandha. Jarasandha’s dream was to conquer the whole known world. Through absolute brutal force, his power was growing at great pace. Kamsa aligned with him because that was the only way to get powerful at that time.

Why Kamsa Wanted To Kill Krishna

Kamsa’s sister Devaki got married to Vasudeva, another Yadava chief. Just after the wedding, when Kamsa himself was driving the newlywed couple in his chariot, an astral voice made a prophecy. This voice said from the sky, “Oh Kamsa, very happily you are driving your sister after her wedding. The eighth child born to this sister of yours will slay you. That will be your end.”

Immediately, Kamsa got violent. “Oh, her eighth child is going to come and kill me? I am going to kill her right now. Let’s see how she will have her eighth child.” He took out his sword and right there, wanted to behead his own sister. Vasudeva the groom, begged of Kamsa, “Please spare her life. How can you do this? She is your sister and we are just married. How can you just slaughter her right here?” “Her eighth child is going to kill me. I am not going to let anything like that happen.” So Vasudeva offered a pact, “I will give all our newborn children to you. You can kill them. But please spare my wife right now.”

But Kamsa, overly concerned about his life and security, kept his sister and his brother-in-law under a kind of house imprisonment so that they were constantly watched. The first child was born and the guards informed Kamsa. When he came, Devaki and Vasudeva wept and begged, “It is only the eighth child which is going to kill you. Spare this one.” Kamsa said, “I don’t want to take any chances.” He picked up the child, held him by the legs and smashed him on a rock. This continued. Every time a child was born, the parents begged Kamsa in many ways, but he wouldn’t spare a single one. Six new-born children were slaughtered like this. 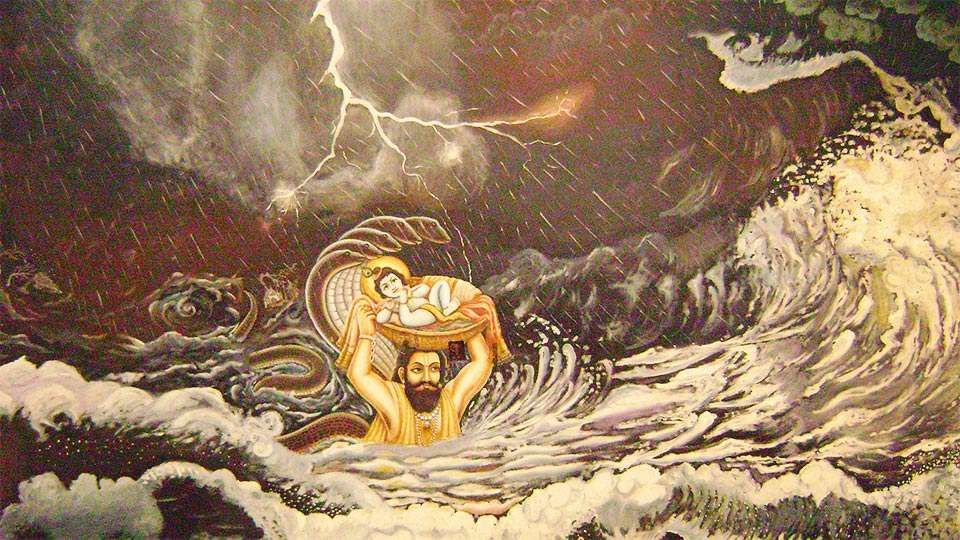 Devaki and Vasudeva were very frustrated with Kamsa’s ways. The subjects in the kingdom were very fearful of Kamsa. Over time, they also got frustrated with the absolutely cruel ways of the king, constantly at battle with someone and then, killing these children. Slowly, dissension was beginning to happen within the palace. So when the seventh child came, Vasudeva managed to smuggle it out and replace it with a stillborn child that they found elsewhere. This child was smuggled across the Yamuna River to Gokula and gave it to Rohini, another wife of Vasudeva.

The name of this child was Balarama. As he grew up, he became like a giant and there are any number of stories about his strength and the feats that he performed.

When the eighth child was due, Kamsa got really nervy. All these days, they had been under house arrest, but now he shackled Vasudeva and put Devaki in a proper prison. The child was born on the eighth day into the dark half of the month, and it was pouring rain and thunder. Kamsa would not allow anybody to enter the prison because something may happen. He put his trusted aide, a lady who was related to him whose name was Puthana, as a midwife. She was supposed to watch. The plan was that the moment the child is born, she would hand it over to Kamsa who would kill the child.

The labor pains came and went, came and went. Puthana waited and waited. It didn’t happen. During the night, she went out to visit her home for a few minutes and come back. But when she arrived at her home, suddenly a very heavy rain set in and the streets were flooded. In this situation, Puthana was unable to go back to the prison.

That was when the child was born and a miracle happened. The doors of the prison opened up by themselves – all the guards fell asleep – the shackles broke. Immediately, Vasudeva saw that this was a divine intervention. He picked up the child and as if by intuitive guidance, he walked to the river Yamuna. Though the whole place was flooding, he found to his surprise that the ford which crossed the river was sticking out and he could clearly walk. He walked across and went to the house of Nanda and his wife Yashodha. Yashodha had just delivered a girl child. She had had a difficult labor and was unconscious. Vasudeva replaced the girl child with Krishna, took the girl child and came back to the prison.

What Happened to Yashoda's Daughter?

Then the girl child cried. The guards went and reported to Kamsa. By then, Puthana had returned. Kamsa came and saw that it was a girl. He knew something fishy had happened, so he asked Puthana, “Are you sure? Were you here when the child was born?” Puthana, fearing for her life said, “I was here. I saw it with my own eyes. This child was born to Devaki.” To add authenticity, she said, “This child was born right here in front of my eyes.” Devaki and Vasudeva begged, “See, it is just a girl. This girl cannot kill you. If it was a boy, he would have been your slayer. But this is a girl. Spare this girl.” But Kamsa said, “No, I don’t want to take any chances.” So once again, he picked up the child by her legs and wanted to crash her on the floor. As he was about to do this, this child slipped out of his hands, flew out the window, laughed at him and said, “Your slayer is elsewhere.”

Now Kamsa really got suspicious. He interrogated everyone who was there. The guards had slept, Puthana had gone out. Nobody was willing to admit anything because all of them valued their heads. When you run situations by threat, initially you think it’s an advantage. “If you don’t do this, you’re dead” – so things will happen the way you want them. But after some time, this becomes a big problem. People know that if something doesn’t happen the way you want it, it will cost their life. So they will create a whole make-believe situation all around you. When you run things by fear, this is the consequence that you will have to face.

Meanwhile, Krishna was placed into the community of Gokula. In spite of being the son of a chief, he grew up in an ordinary cow-herding community. There are any number of miracles and adventures that happened around him during that phase of his life.

Episodes surrounding the birth of Krishna from Wikipedia

Krishna
Indian Culture
Spirituality
Mysticism
Wisdom
Related Content
article
Mahabharat Episode 58: One Act that Changed Krishna Forever
Ashwatthama releases the Brahmastra and Krishna has to step in to counter its aftereffects on a just born infant. Read to find out why this act completely changed Krishna.
Aug 1, 2020
article
Krishna and the Women in His Life
Sadhguru looks at two women who entered Krishna’s life in different ways, but fell in love with him and became his devotees – his mother Yashodha, and Putana, the assassin who came to kill him!
Apr 29, 2014
article
Mahabharat Episode 10: The Yadava Clan and Krishna’s Birth
In this Mahabharat episode, Sadhguru looks at the descendants of Puru’s brother Yadu, who formed the Yadava clan, into which Krishna was born.
Oct 25, 2015
Close