For the last couple of years, Isha Vidhya supporters have been making use of city marathons/ runs to spread awareness about Isha Vidhya schools and raise funds for them. The TCS Bangalore Run on May 27th 2012 was targeted by Bangalore volunteers, who started preparing for it 2 months prior to the event.

F or the last couple of years, Isha Vidhya supporters have been making use of city marathons/runs to spread awareness about Isha Vidhya schools and raise funds for them. The TCS Bangalore Run on May 27th 2012 was targeted by Bangalore volunteers, who started preparing for it 2 months prior to the event.

The biggest challenge faced in participation for the marathon was about establishing the Isha Vidhya Project in peoples’ minds. The first target was getting volunteer involvement for the run and then fundraising.

Preparation: Bangalore city was divided into seven zones and each zone was headed by a coordinator. Every fortnight core volunteers and supporters met to discuss the overall strategy and review their progress. They drew up lists of friends, relatives, family members, colleagues, and clients whom they could inspire to run in the marathon or contribute on their behalf. By the day of event, 186 supporters had registered to run for Isha Vidhya. Bright blue Isha Vidhya T-shirts, especially printed for the Bangalore Run, were proudly worn by each of the runners and cheering supporters. 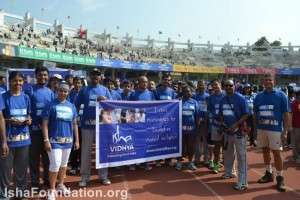 The Run: The day brought a lot of high spirits and joy. 27th was a beautiful and bright day with a shower the previous night. It was a cool and exciting day which saw Kanteerava stadium in Bangalore filled with runners. Isha Vidhya volunteers were full of energy and enthusiasm, especially elated to be running with supporters from Mumbai, Coimbatore and Hong Kong.

Starting off the Isha way with an invocation, cheerful and joyous was the continuing mood of the entire run. Some supporters participated in the 10 km run, while the majority ran in the 5.7km category. Joyful slogans for Isha Vidhya and much photographing peppered the participation in the event.

Some sharings from the runners:

I had been practicing for the run for the past 2 months by walking/running in my neighbourhood. The run day was so beautiful, and I completed Open 10K run in 1 hour and 35 minutes. I have been involved in fundraising in my area, and I hope to finish the fundraising effort with a significant amount raised for Isha Vidhya to educate rural children. I learnt a lot in the whole process of running and fund-raising, and look forward for more such events."

I ran for Isha Vidhya barefoot in this run for 10 kms, and keeping at heart the noble cause made it so beautiful."

Volunteers are still collecting the promised donations. They have pledged to continue the awareness building and fundraising efforts by participating in other such events. If you wish to organize a fundraising event in your city and would like our support, please write to us at info@ishavidhya.org