I really don’t know how many pictures people have taken of me. It should be in the millions. But Raghu Rai’s pictures are significant because in some of them he captured something that no one ever has before.

ArticleJul 2, 2019
Sadhguru: I really don’t know how many pictures people have taken of me. It should be in the millions. The pictures are significant not because it’s of the ashram, or me, or Adiyogi – the pictures are significant because Raghu did capture something in a few pictures that no one has ever captured, something I am always conscious of. In the sense, the entire system of yoga is essentially in the physical dimension. Existence is about geometry. One way of looking at the yogic process is, it is about making your personal geometry in such a way that it aligns and reflects the cosmic geometry. If two things become geometrically congruent, in many ways, they become one. The entire yogic system is about that.

If I just look at a tree, right from my childhood, the first thing that registers for me is the entire geometry of the tree. I don’t see the colors, I don’t see the shades – the first thing I see is the geometric way in which it is standing. My draw for any form is because of its geometry, not necessarily because of its color and other aspects of surface beauty. The real beauty of any physical form is in its geometry. When people take pictures of you or other things, they will look for a picture which is nice, proper, smiling, facing a certain way, but there are other aspects which are not consciously done.

The nature of a yogi is that he becomes geometrically conscious. When I say conscious, I do not mean self-conscious about how I stand and sit. It is not about that. It is just that you ingrain into your system that your body naturally settles down in a certain way. In a way, if you want to understand this, you must see how wild animals sit. Let’s say a snake, how it settles down for different purposes, geometrically in a very economical way – minimum movement, maximum impact. They always know how to arrange themselves. Only human beings go into all kinds of geometric disorder. Most other creatures, particularly carnivorous animals, have an enormous sense of geometry – how they stand, crouch, and do things.

A yogi is like that: he sits, stands, and breathes in a certain way, because being even slightly off means you’re losing out on something. If you are geometrically reasonably perfect or nearly perfect, you will function with least amount of friction. This is so with any machine. A machine is working efficiently when it is geometrically well-aligned. If it’s geometrically misaligned, friction will happen. Similarly within a human being, how you sit, stand, breathe, and move will determine how much energy you expend doing simple activities of life. Those who are geometrically discordant will run out of energy very quickly. For those who are geometrically aligned, their energies will last for a long time.

Initially, I thought it’s too embarrassing to have a picture book about myself. But then I looked at these pictures again and again. Which is not like me, I don’t look at my own photographs, nor do I like to listen to my own talks. I’ve been looking at these particular pictures again and again simply because there are certain aspects of geometry that he caught, which translate into movement if you look at them.

These are still pictures, but in some of the pictures, somewhere there is an effect of a video in the still picture. If you look at it for long enough, it moves. Because geometrically, you got me at a time when I was in a certain way. I’m always conscious of this within myself. This is lifetimes of work to build it into your system so that you are always aligned with everything around you. Otherwise you cannot do things.

The nature of physical existence is rooted in its geometry. Geometry not as a subject – geometry as arrangement of physical forms. There is a certain geometric beauty to some of the pictures. At least fifteen percent of the pictures have captured that movement of things. That’s what excited me when I saw his first images. Raghu always said, “Sadhguru, you can’t treat me like a photographer – I am not a photographer.” Then I said, “What the hell are you then?” Then, as I looked at a few pictures, I saw it. 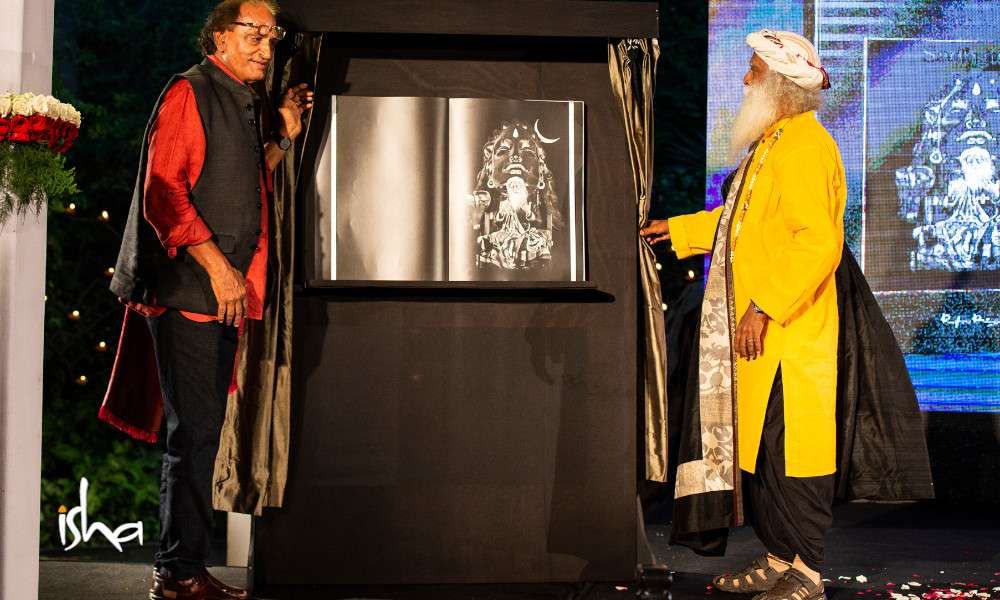 And something I never did till now, I never allowed any photographer to enter my home and shoot pictures. He was the first photographer who entered the house and shot pictures. I want you to enjoy the art behind it. Not just seeing your Sadhguru there. I want you to understand, because you need to bring this into your life that your life, in some way, has to be geometrically congruent; only then will you live a very smooth life. Otherwise everything will be friction, somewhere or the other.

Editor's Note: One of the biggest coffee table books, "Sadhguru" photo book by the famed photographer, Raghu Rai, is available on ishalife.

Yoga
Inclusiveness
Perception
Consciousness
Awareness
Awareness
Wisdom
Related Content
article
Architecture and Spirituality
Sadhguru explores the nature of geometry and architecture, and explains the unique nature of the buildings at the Isha Yoga Center, especially the Dhyanalinga dome.
Sep 22, 2012
article
Why Do You Sit in a Particular Way, Sadhguru?
Students of Delhi’s Shri Ram College of Commerce ask Sadhguru about his “signature” sitting posture during a Youth and Truth live event.
Sep 9, 2018
article
What is Beauty?
Sabyasachi Mukherjee in conversation with Sadhguru on beauty, design, fashion, and yoga.
Jul 12, 2016
Close