Raghu Rai, the renowned photographer, shares his experiences while making one of the biggest coffee-table photo books, “Sadhguru”.

Watch live, as Raghu Rai unveils his photo book, “Sadhguru,” in the presence of Sadhguru on September 3 at 6pm. Pre-order this limited collector’s edition and save 20%.

“I have no need for a Guru,” I told an Isha meditator about 18 months ago, when asked if I wanted to meet Sadhguru. I felt this way since my Guru passed away about 8 years ago, and I had been spending time with His Holiness the Dalai Lama subsequently. Then about six months later, my wife went on the Isha Kailash Yatra and wouldn’t stop raving about Sadhguru. I became a wee bit interested but still didn’t act on it. Then I got one more opportunity to meet him, this time in the context of saving rivers – a subject so close to my heart that I couldn’t refuse it. My wife made me listen to a couple of Sadhguru’s videos before I was to meet him – this made a tremendous difference in how I saw Sadhguru from then on.

Framing Sadhguru was a humbling experience and the highest privilege, leaving me wanting to do more.

“Sadhguru, you are the most original and refreshing thinker I have met in my life,” I said to him in our first meeting. I have been around Mother Teresa and His Holiness the Dalai Lama extensively, but I haven’t met anybody like Sadhguru so far. I spent about 15 days with Sadhguru to make the book about him, and I took another 2 months to edit the 180 pages. I must say that I haven’t had such a special, powerful and fulfilling experience ever before.

My photos reveal a dimension of Sadhguru in my perception, where I see him as a yogi, a poet and an eternal dancer, the Nataraja. Being close to him during the Yogeshwara Linga consecration was an experience I can’t describe. I had never imagined that I would meet someone who could carry out such powerful mystical processes in front of so many people with such ease. However, being around him was not all spiritual or profound – it is hard not to get lost in his contagious aliveness and in the mischievous child that he can be.

The love and affection he showered upon me during the fifteen days I spent with him is unforgettable.

When I went to his house, he excitedly showed me a swanky powerful Italian motorbike that someone had gifted him, and asked if we could make use of that. “Of course!” I said. Then I went to Adiyogi and waited for him to come on his bike. Sadhguru came ...vrooom, took a round and came back expecting me to have taken the shot. “Slow, please Sadhguru,” I said. Again he took a round, but this time came back slowly for me to take the shot. It happened about five times, and after a while, Sadhguru simply rode off to Malai Vasal then onto the road to Coimbatore leaving us puzzled. He was back after 5-10 minutes though. His excitement about riding the bike was totally refreshing. 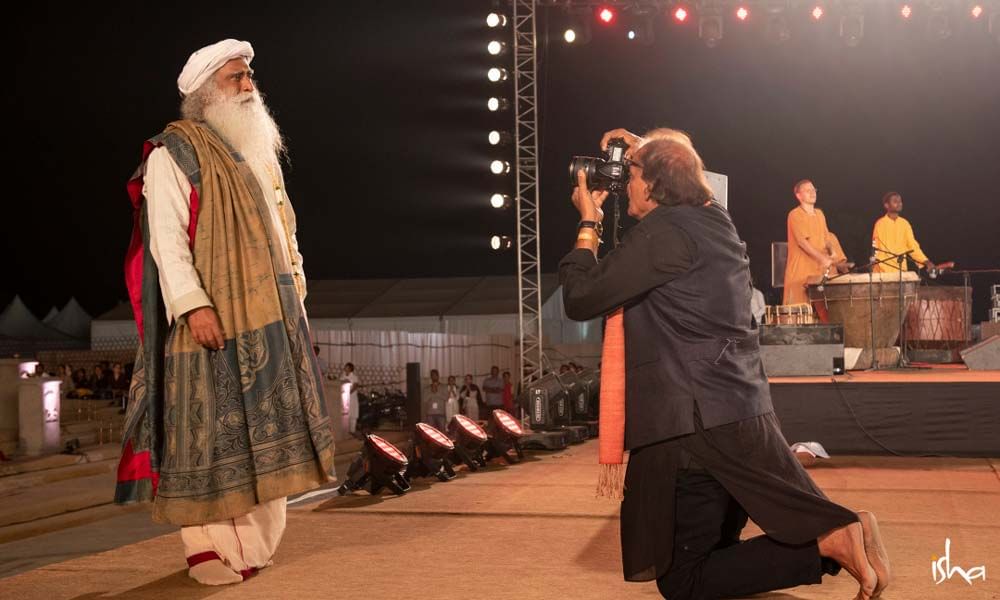 “Have you eaten?” was the first thing he asked when I came to his house. “Sadhguru, I was counting on having something with you,” I said jokingly. That was it. We sat together and had three dosas each –the best dosas I had ever tasted. The love and affection he showered upon me during the fifteen days I spent with him is unforgettable.

Making of the Cover Image of the Photo Book

“Sadhguru, I will love to do a book on you, but I must get a lot of freedom,” I had said to him in our first meeting. The access and freedom was indeed granted, much more than I had experienced when I shot Mother Teresa and His Holiness the Dalai Lama. He was accommodating me to such an extent that I even shot him close on the dais during Mahashivaratri. I remember when I saw him sitting against the backdrop of Adiyogi, while I was standing about 35 ft away. I really wanted to go closer to shoot him big and bold in front of Adiyogi in the dark of that night. So from that distance, I made eye contact and gestured to him if I could come close. He nodded, and there I got my most prized photo, which is also the cover of the book. He also agreed to go around Adiyogi in a chopper with me so I could get more of him with Adiyogi.

I felt the best way to depict Sadhguru was to show what happens to those people around him when in his presence.

Another time I remember, I was walking up the Chamundi Hill with him, and he asked me if I was tired. “I don’t get tired when I am at work,” I immediately replied. “Uncle ji, only when you are climbing the mountains, you know your age,” he said in his cute Hindi. I couldn’t help but laugh. I am 76, and that remark was surely not out of place. In fact, I had tried to accompany him on the Nepal trek, and had to give up after two days.

The sun was just setting when I shot him meditating at his enlightenment spot on Chamundi Hill. Incidentally, I captured a ray of sun falling just behind him, and showed it to him excitedly. “But this is not falling on my head,” he said dismissing my excitement. “This is falling on your spine,” I retorted, not willing to give up. “No, this is going from my spine to the Sun,” he corrected. What to say to that? I didn’t know.

As we were coming down from Chamundi Hill, we saw a chaat vendor carrying cucumber, papaya, etc. “I used to enjoy eating it as a child,” said Sadhguru. “Why don’t we eat it now?” I suggested. He promptly asked two volunteers to bring the chaat for us in the car. “No, you get out of the car, buy it yourself, eat it on the road, just the way you did as a child,” I insisted. And he gave in.

Lastly, I felt the best way to depict Sadhguru was to show what happens to those people around him when in his presence. Therefore, a significant section in the book is dedicated to this imagery. For example, there are about 14 pages that show the relationship between Sadhguru sitting on the dais, far off from anybody, and a Korean girl who was in indescribable ecstasy and literally dancing to the smallest intonations of his talk, seated among the audience.

My photos reveal a dimension of Sadhguru in my perception, where I see him as a yogi, a poet and an eternal dancer, the Nataraja.

Framing Sadhguru was a humbling experience and the highest privilege, leaving me wanting to do more. I see beings like Sadhguru as the living gods of yesterday - like Buddha, Jesus, Krishna and Rama, who walked the planet in human form. It was a liberating process for me to do the photography book with him, and it is an understatement to say that I evolved as a human being through this relationship. I love Sadhguru and I wanted to simply eat him sometimes.

Editor's Note: Watch live, as Raghu Rai unveils his photo book, “Sadhguru,” in the presence of Sadhguru on September 3 at 6pm. Pre-order this limited collector’s edition and save 20%.