Rising India - in Conversation with Sadhguru and Baba Ramdev

Is there a contradiction between yoga and bhoga? Is it okay for a yogi to do business? Is spirituality for the privileged and dharma for the masses? These are some of the topics poet and lyricist Prasoon Joshi seeks to explore with Sadhguru and Baba Ramdev. The following excerpt is taken from a session titled “New Mantras for India” at the NEWS18 Rising India Summit 2019 on 25 February 2019 in New Delhi.

Yoga and Bhoga – Conflict or Synergy?

Prasoon Joshi: Sadhguru, and specially Babaji, yoga and bhoga are understood as two different things. In common understanding, when we talk about yog, it seems as if there is an inward journey. You are lonely, there is sadhana there; there is a certain concept of yog.

Baba Ramdev: Very few people know the right definition of yoga and bhoga. Whatever resources one has in life, whatever kind of prosperity is there, our body, mind, sense organs – what is visible in the universe, this is called bhoga. Soul, Supreme Soul, peace, happiness – that which is not visible is called yoga. So yoga and bhoga are not in conflict at all. If we first establish ourselves in yoga and then do bhoga, and if it is rightly utilized, it will contribute towards the development of the nation. That is when a Rising India will happen.

Prasoon Joshi: Absolutely. You have explained this nicely. But there is a contradiction in people’s minds. When we look at Sadhguru, riding a bike, flying a plane, playing golf, mentoring CEOs or collaborating with CEOs of the companies… they don’t think these things could be a part of yoga. On the other hand, when they see Baba Ramdev… He is discussed as someone who has a strategic mind of how marketing should be done in today’s India, and he’s found an innovative way of doing it. And of course his company is a case study. Is there a contradiction between yoga and bhog?

Spirituality Is No Disability

Sadhguru: Well, certain people think, yoga, the spiritual process, or spirituality is some kind of disability. That is their understanding, unfortunately. If spirituality was a disability, we should ban it immediately. Why practice a disability? Spirituality is a way of empowering yourself in such a way that we can enhance life to a point where other people will think it is superhuman. Because as life, we have only two ingredients – there is time and there is energy. Time is rolling away for all of us at the same pace. It is only the energy we can manage.

Yoga is a way of mastering your energy in such a way that if you live for ten years, it looks like you have been here for hundred years – that is the amount of work and activity you did. If someone is not in yoga, in my understanding, they are not interested in life. They are waiting for death. They may not realize that consciously, but that is exactly the situation, because they are letting time go by without enhancing their energies. By accumulations your life is not enhanced. Maybe in other people’s eyes you are enhanced. But as a life you are in no way enhanced. Only by enhancing your energy, only by having mastery over your own system, do you have access and a purchase into this life. 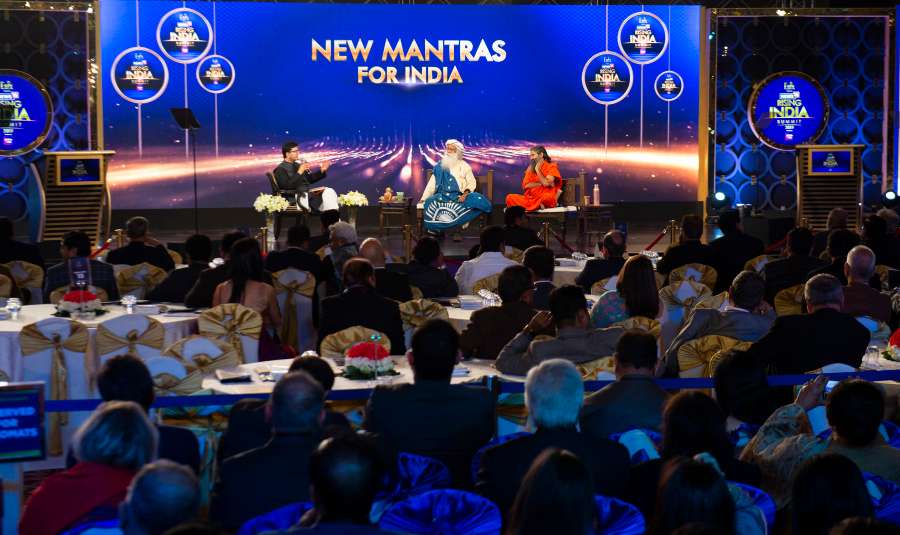 Spirituality – Only for a Privileged Few?

Prasoon Joshi: Another question which comes up is, is spirituality for the privileged class and dharm for masses? Do you think yoga should be linked with a religion, or should it be agnostic?

Sadhguru: This idea of a sectarian religion is an imported idea for us. In this culture, we had no religion, and we still do not have; we are only trying to pretend we have, but we are struggling with it. Because the fundamental definition and the requirement for you to be religious is, you must have a set of beliefs. Spiritual process means you are a seeker. The fundamental qualification to be a seeker is you have realized that you do not know a whole lot of things about life. If for whatever you do not know, you make up a story and believe in it, that is religion. That is not the nature of our nation. This nation is a land of seekers.

Even when so-called divine entities came, they could not give us commandments of any kind. All they got were questions. Shiva opens his mouth to his beloved wife, she freaks him with questions. Krishna, after many years of waiting with someone who is a very intimate friend , at the edge of a battlefield, he tries to say something – that guy has a hundred questions. Who has been able to give a commandment and say, “This is it”? That is not our nation.

Ignorance as a Possibility

You are talking about the rural areas or underprivileged people. If I go to remote villages, people don’t ask, “Give me a golden horse or something.” First thing they say is, “I want liberation.” Is this spiritual or religious? Just go to any village and talk to people. If someone looks like me, people will say, “We want mukti.” They want freedom from everything. They don’t want a ticket to heaven. They don’t want to go and sit in God’s lap. They don’t want pleasures up there. They want liberation. This is the spiritual process. The entire country is soaked in it. Now we are systematically trying to destroy this, unfortunately.

But the real ethos of this nation is we are a land of seekers. We must keep it that way, because in seeking, there is no conflict. Only in believing, there is conflict. The moment you believe one thing and I believe something else, we have already started conflict.

Baba Ramdev: See, in India, spirituality and religion are treated as one. The highest way to conduct one’s life is called dharma. In India, principles, highest ideals, and the highest values of life are looked upon as religion as well as spirituality. In other countries, when they translated it to English, they called it religion and spirituality and it got distorted.

Editor’s Note: In the ebook, “Bha-ra-ta," Sadhguru looks at the past, present and future of this nation, and explores why this culture matters to every human being on the planet. With images, graphics and Sadhguru’s inspiring words, here’s Bharat as you have never known it! Download Bha-ra-ta.

A version of this article was originally published in Forest Flower, April 2019.

Yoga
Spirituality
In Conversation with the Mystic
Related Content
article
What is Navratri? Nine Days of Navratri Explained
Navratri is a period of nine days celebrating the Divine Feminine and is happening from 26 Sep to 4 Oct in 2022. Sadhguru delves into the deeper spiritual aspects of this festival, revealing how the three main qualities in existence are manifest in these nine days.
Jan 19, 2022
article
Naga Panchami and the Symbolism of the Snake in Mythology
The festival of Naga Panchami is not merely snake worship as commonly believed, but has a much deeper significance. Sadhguru explains the snake symbolism and the immense possibility that it is.
Jan 12, 2022
article
6 Remarkable Stories of Agastya Muni’s Life
One of the Saptarishis and a direct disciple of Adiyogi Shiva, Agastya Muni was a being of tremendous proportions. His tireless efforts ensured that the spiritual process became widely available to the common person.
Dec 20, 2021
Close