Raas Leela – The Dance of Passion

Raas Leela, The Dance of Passion - The joyful dance of Krishna & the gopis has been immortalized in legend. Read more to learn the significance of Rass Leela.

ArticleMar 21, 2016
Raas leela, the joyful dance of Krishna and the gopis has been immortalized in legend. But what is its significance, and why was even Shiva, the Mahadeva, attracted to it? Let’s find out from Sadhguru.

Sadhguru: There is something very feminine about celebration. Whether a man celebrates or a woman celebrates, celebration is essentially feminine. There is a very beautiful story in the Mahabharata to describe the significance of being feminine. When at eight years of age, Krishna moved from Gokula to Vrindhavan, he became immensely popular among the village folk. It was at the time of the Holi festival, just after spring when everything is in full bloom. On a certain evening, a full moon day, the boys and girls of the village gathered on the banks of river Yamuna. They started playing and having fun throwing water and sand at each other. After some time, the play broke into a dance. And they danced and danced because they were in such an exuberant and joyful state. But slowly, one by one, the clumsier ones dropped off. When Krishna saw this, he took out his flute and started to play. His play was so enchanting that everyone gathered around him and once again swayed, for almost half the night. 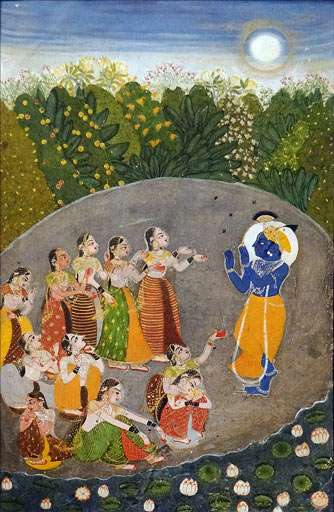 This is the first incident of Raas Leela, where a simple joyful mingling of people rose to a transcendental state. The word “raas” literally means “juice,” but it can also indicate passion. So this was the dance of passion. The fragrance of this dance spread. People came to know that on full moon nights at midnight, this dance happened, and the numbers of those who participated increased.

It also fell on Shiva’s ears that on full moon nights, a fantastic dance happens on the banks of the river Yamuna. He became aware that people just danced their way to what he had achieved through meditation. Shiva is Nataraja, the Lord of Dance. This is something which is unique to India – only Indian gods dance. If they fall in love, they dance. If they get ecstatic, they dance. If they get angry, they dance. So being the Lord of Dance, Shiva was very amused that this little boy, his devotee, was taking people to transcendental states simply by dancing and blowing upon his flute. He wanted to witness this.

He walked from the Himalayas to the banks of the river Yamuna and said to a boatman who was there, “Please take me across to Vrindhavan. I want to see Krishna’s Raas.” The boat man replied, “You cannot go like this. When you go to the Raas, Krishna is the only man, everyone else is a woman. If you want to go, you have to go as a woman.”

Shiva is considered the ultimate of the masculine – the purusha among purushas. So it was a strange request, that Shiva had to become a woman. But the Raas was in full swing and Shiva wanted to go there. So the boatman said, “If you must go, you must wear woman’s clothing.”

Shiva looked around. No one was looking, so he said, “Okay, give me the gopi’s clothes.” He wore the clothes of a gopi and went across. He is such a sport.

This story signifies that essentially, the nature of celebration is feminine. Feminine means exuberance. And that is how you should be every moment of your life – exuberantly alive. What is the point in being half alive? We did not come here to avoid life, we came to know and experience life. And you cannot experience life unless you keep yourself as intense and exuberant as possible. Your whole life, your very existence should become a celebration. If your life has to become a celebration, you have to become absolutely joyful within yourself. And this is not just empty talk – such a thing is possible. There is a whole science through which you can create the right kind of chemistry within yourself to become joyful by your own nature.

கிருஷ்ணன்
Related Content
article
4 Rare Krishna Stories
Here are 4 rarely heard stories from Krishna’s life! Find out how Duryodhana’s wife became a Krishna devotee, how Krishna fixed Satyabama’s vanity, the strange cure for Krishna’s headache, and why Krishna left his devotee to fend for himself.
Aug 8, 2020
article
Karna in Mahabharat – Hero or Villain?
Karna is among the most popular and complex characters in the Mahabharata, showing both nobility and nastiness over the course of the story.
Jul 27, 2020
article
Krishna Stories: Exploring Krishna's Path of the Playful
Everyone has their own favorite among the many Krishna stories. Here are a few of the more popular ones mixed in with some of the lesser known stories, told by Sadhguru.
Aug 24, 2016
Close