Manasarovar, Sadhguru explains, a remnant of the ancient Tethys Sea, is a place that played a pivotal role in the spiritual evolution and most likely even the physical evolution of the human species. 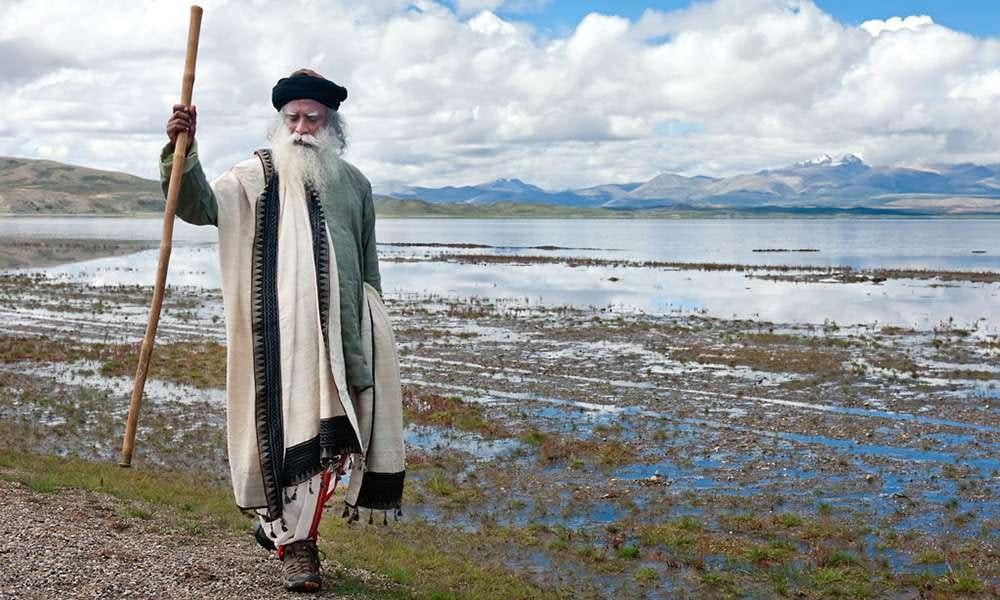 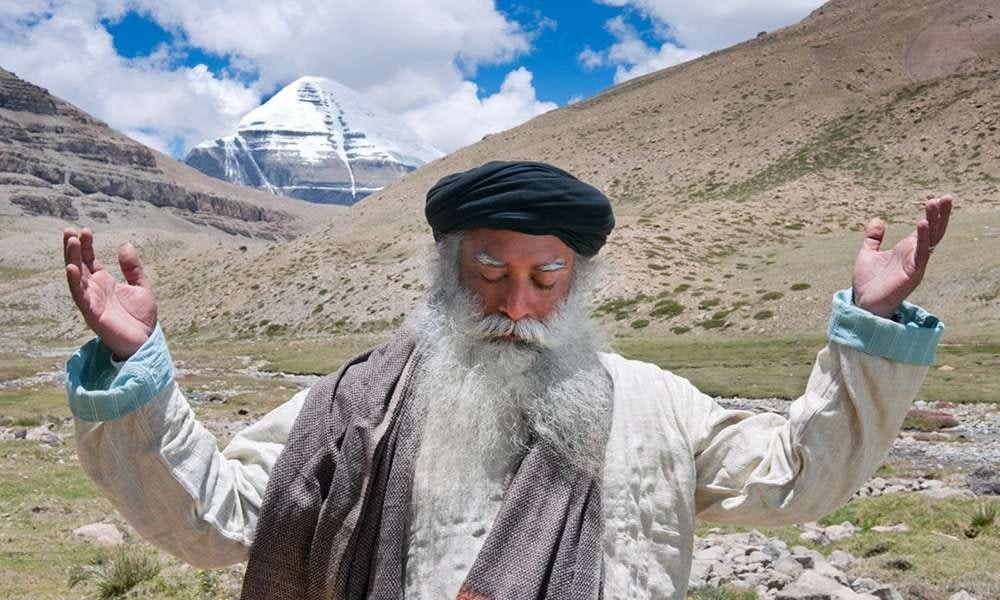 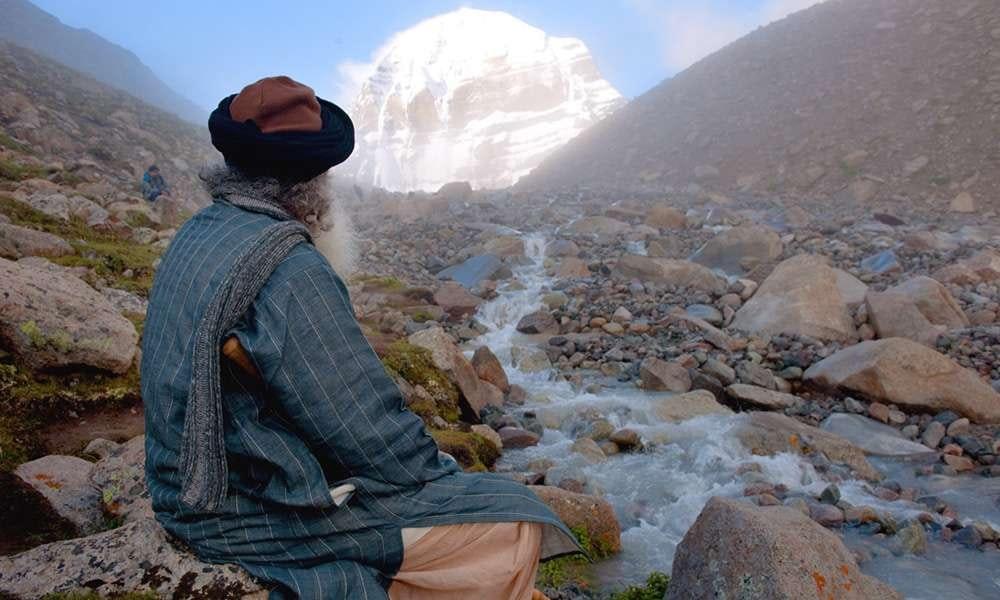 Right from my childhood, I have heard many stories about how yakshas, ganas and devas came from somewhere else and took away this princess, got married to that person, this happened, that happened – all kinds of stories. I enjoy them, I appreciate them, but believing them is not in me. I never believed a word of it, but I gathered a rich accumulation of stories within me from various sources because I like the nature of the stories. I like the imagination behind them. But when I went to Manasarovar, for the first time I saw things happening there that I never ever believed possible. Slowly, Im beginning to wonder if all these stories could actually be true. It makes me feel a little silly because I have built a reputation around the world of a straight-talking guru – absolutely logical, nobody can find a hole in my logic. But now, if I talk about what I'm seeing, particularly in Manasarovar, I'm staking my reputation. And it will make me look like a silly UFO freak…

In many ways, this place has been the very fulcrum of the spiritual process. The esoteric and mystical sciences have evolved from this in many different ways.

There have been any number of references in the Sanskrit scriptures of India about beings from beyond visiting here, transacting with the local population and various things. I have always dismissed them as exaggerated imagination. Indians are good storytellers. We have the greatest stories on the planet. There isn’t any other story like Mahabharat – such an elaborate story, a story inside a story inside a story inside a story inside a story… and a story. So I appreciated it as our storytelling talent, not as any kind of reality. I never considered that this could actually be a reality. But when you look around in the world, everywhere, there have been similar stories. All of them could not have invented the same type of stories unless something really happened. The Bible distinctly talks about similar stories, and particularly the Greek culture talks about very similar stories, very similar sounding names… Right from the Rig Vedic times, we have been talking about star riders or people who came from the stars, or a starship. Another very common talk in the Sanskrit scriptures is about sky people, or sky travelers – their contribution to local societies, how they visited this planet – so many stories. Similar words and similar stories are there in the Sumerian culture, and also in certain cultures of Arabia and northern parts of Africa. Very similar stories are also there in South America. What stories they had in North America, we do not know because those cultures were completely erased. They carry similar stories in their culture with similar words. I have heard many stories like that but I thought it is excessive imagination of the human mind.

There is a whole lot of traffic of these beings happening at Manasarovar. Particularly early morning between 02:30 and 03:45, there is brisk activity. Like clockwork, it starts at that time and exactly at 03:45, it stops.

Manasarovar is a remnant of the Tethys Sea. What was an ocean is now at 14,900 feet elevation. The water has turned sweet after these hundreds of thousands of years, but still it retains the characteristics of an ocean in terms of what is found there. Above all, there is a whole lot of transaction of another kind of life… It has been many years now that we have been going there – it is compulsively drawing me back. Unfortunately, my stays there have been very, very brief, and it has always been with a large group of people who are too distracted by their own discomforts and problems – cold, lack of oxygen in the air, all these things. But whatever little attention we have paid to it has yielded in many different ways.

absolutely, from its origin to its ultimate nature. Having known this piece of life, by inference you know every other life the way it is.

What we see in Manasarovar is life, but not the way we know life. The basic parameters of life the way we know it is, they are either individual or when they unite, they lose their individuality. That is the basis of our spiritual process also. And life here is either conscious or not conscious. But what I see at Manasarovar defies these parameters. It is individual, at the same time merged together. It seems to be unconscious and moving by tendencies, but it is very conscious. This time particularly, I’m 100% clear – they are very, very conscious, far more conscious than most human beings are, but at the same time they let themselves go about as if by automation. It is very difficult to explain anything about them since we don’t have the language to articulate this because it defies all the fundamentals of logic.

There is a whole lot of traffic of these beings happening at Manasarovar. Particularly early morning between 02:30 and 03:45, there is brisk activity. Like clockwork, it starts at that time and exactly at 03:45, it stops. Always, in the yogic systems we have been told, 03:40 to 03:45 is the Brahma Muhurtham, that is the time to wake up. Many of our brahmacharis in the ashram wake up at that time to do their sadhana. Ever since I was a little over 15 years of age, no matter where I am, which part of the world I am in, what time zone I am in, at 03:45 in the morning, I’m awake at least for a few minutes. Sometimes I get up, sometimes I sleep after that, but at 03:45 I always wake up. I have never been able to explain to myself why this is so. And exactly at 03:45 the activity closes at Manasarovar, as if it is timed. We have still not figured out everything about it, but so much more is clear now than it was two years ago.

Essentially, every description about Shiva indicates that he did not belong to this planet. In fact, in the Shiva sutras, he is being referred to as yaksha-swaroopi. That means he is not from here.

Particularly this time, Manasarovar yielded to me in a different way and revealed another dimension of itself. Now it might have become just a belief system or a ritual, but in many cultures, for thousands of years this has been a live process that some spiritual orders traveled to parts of the Himalayas and Tibet to meet certain beings who have always been there, guiding them. The Indian yogis have always done it. The Buddhists have also picked this up and go to certain parts of the Himalayas where they meet their Masters of the past. The other esoteric groups from Central Asian countries have done this for ages. And the Druze of the Middle East, who have always believed that their Masters came from the Himalayas, they also continue to make these trips.

Beneath the lake, there is a space where something beyond what we can logically imagine is happening, and this process is yet to be deciphered. It is a huge cavity with various kinds of life processes happening there...

In many ways, this place has been the very fulcrum of the spiritual process. The esoteric and mystical sciences have evolved from this in many different ways. The demographics have changed in the last 800 to 900 years, but essentially India was a nation whose basic God was Shiva, always. As everyone knows, there are thousands of temples for Shiva and many more stories about him, but not a single story about his childhood. He has no parentage. He was not born to anybody here – that is an established fact in our culture. He came from elsewhere. And we know that his friends, the ganas who were around him, were always described as goblins and demons, distorted and demented beings. He was always in the company of that kind of life which did not look human. Humans worshiped him, but his immediate company was never human. And there is no old age, there is no grave. And repeatedly, there are stories that no woman could bear a child for him. Neither Sati nor Parvathi had any children from him. The two children of his were produced out of their tantric bodies. You know how Ganesha was created from the sandal paste, and how Subramanya or Murugan or Skanda – as we call him by different names – was born in six different wombs by six apsaras. Apsaras means once again, they did not belong to this planet. There is this whole story how those six bodies were merged into one. Essentially, every description about Shiva indicates that he did not belong to this planet. In fact, in the Shiva sutras, he is being referred to as yakshaswaroopi, that means he is not from here. I never considered all these things could be true, but after having been at Manasarovar, and after what we have witnessed and experienced there, this is all becoming one big reality, which is leaving me trembling within myself right now.

The basic material they seem to use to do whatever they are doing there is electric blue in color and it is kept like a sacred space. And I don’t have to tell you, every significant God in this culture has always been described as blue-bodied.

When we went this time, it opened up a different reality. There is something happening there which is incredible and indescribable. Beneath the lake, there is a space where something beyond what we can logically imagine is happening, and this process is yet to be deciphered. It is a huge cavity with various kinds of life processes happening there, some of it the way we know life, most of it we don’t know. The basic material they seem to use to do whatever they are doing there is electric blue in color and it is kept like a sacred space. And I don’t have to tell you, every significant God in this culture has always been described as blue-bodied. Anyone who has walked the yogic path and has done a certain type of sadhana, naturally his aura turns blue, electric blue. It is very difficult to articulate what I have seen in Manasarovar because it is logically impossible to explain. It is life, but not the way we know it. 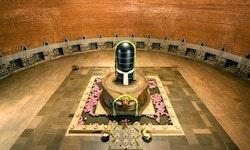 Ambition to Vision
The ebook, "Ambition to Vision" by Sadhguru, offers tangible first steps towards the ultimate plan of action – to understand every aspect of our existence, and make ourselves the way we want.
Video 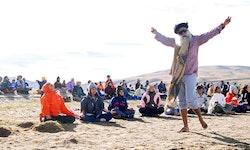 Traveling to Kailash
Watch Koel Purie, host of the TV show, " On The Couch With Koel," as she accompanies and interviews participants of the Kailash-Manasarovar pilgrimage.
Video 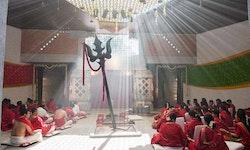 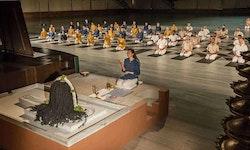 His Abode – Adiyogi Alayam
Sadhguru pens a poem on Adiyogi Alayam at the Isha Yoga Center, which was consecrated from December 23-24, 2012.