The excitement of going on a field trip with the junior school is unmatched. From the moment the kids find out, the house is abuzz with nonstop chatter regarding the upcoming adventure. Groups begin to form around who will sit next to whom on the bus, what songs they’ll sing, what snacks they might have, what they will be doing, etc... There is so much going on that the children find it difficult to sleep at night and yet they manage to wake up bright, eager and fresh, assembling on the porch by 6:30 am, having taken a bath and finished their yoga too! 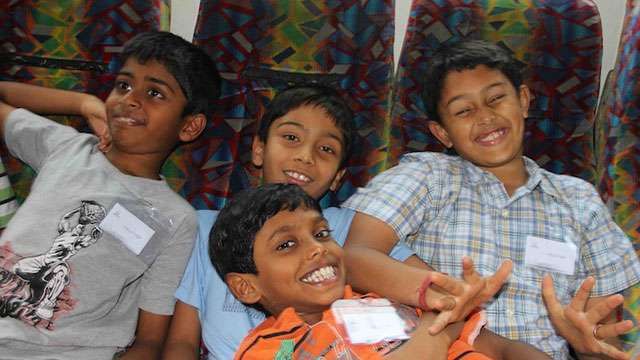 Once on the bus, the incessant chitchat begins. As per the routine, within the first five minutes on the bus comes the initial plea – “When are we going to get food? I’m hungry!” Once fed, within a short time comes the 2nd plea – “When are we going to get there?” But they soon forget about all that as we get to engage in a variety of conversations and get to bond, especially with children from different houses.

After several hours on the bus, we arrived at the Palakkad fort, where some of our teachers explained how and why the fort was constructed the way it was and how the fort had been defended. Soon after our exploration, we decided to have lunch inside a park, before heading over to the Malampuzha dam.

Once there, we kicked off with an awesome rope car that gave us a breathtaking aerial tour of the dam. We then walked on top of the dam and through the gardens surrounding it. Much to the delight of the children, we were then treated to ice cream. Our final destination was home, but what’s a field trip without a final meal in Coimbatore. It was a long day, but one that none of us will ever forget!

Below are a few of the kids’ perspectives:

On the 2nd of August, we set off on the bus to Kerala. The bus was a little scruffy, but the ride was smooth. We had a lot of fun on the bus. The songs on the bus were awesome. On the bus, Sarada anna played a game with us. It was really fun. And on the way back from the restaurant in Coimbatore, we were playing games at the back of the bus. Then we fell asleep.

When we went to the Palakkad Fort, the first thing I saw was the bastion. When I entered the bridge, we crossed a moat. If the water was less murky and there were no fish, I would have liked to swim in it! There was a Krishna temple, Hanuman temple and one other temple inside. We visited almost every place in the fort. After that we were very hungry. So, Maa Chitagni took us to a playground next door. I could see a really nice view of the fort from there. I had a lot of fun.

One of the most favorite things we did at the Malampuzha dam was going on the ropeway. We went two-by-two on “rope seats.” It was about 1 km long. We could see water parks when we looked down. We could also see the Malampuzha dam. Water was pouring from the top of the dam. We could also see the green bush mazes. When we were turning on the other side we saw a big river. The turning was very slow and smooth. I felt very comfortable and I enjoyed it very much. I want to go on the ropeway ride again.