The day marked a celebration at the center, with beautiful rangolis and flowers decorating the premises. Prior to the event, the names of the participants were sorted out and grouped into teams, which were named after common medicinal plants and herbs that we use in our daily life, such as Tulsi and Neem, to make participants more aware of these natural medicines. The program was divided into two batches, with 47 participants in the first batch and 56 participants in the second batch.

The event started off with an inspiring speech by Dr. A. Velayudham, an eminent speaker and physician from the National Institute of Siddha, and the General Secretary of Indian Siddha Physicians Association. He has years of experience in practicing medicine together with Dr. Deivanayakam, a well-known allopathic physician from Tambaram sanatorium. His knowledge and speech prepared the participants to take a step towards health through traditional methods. 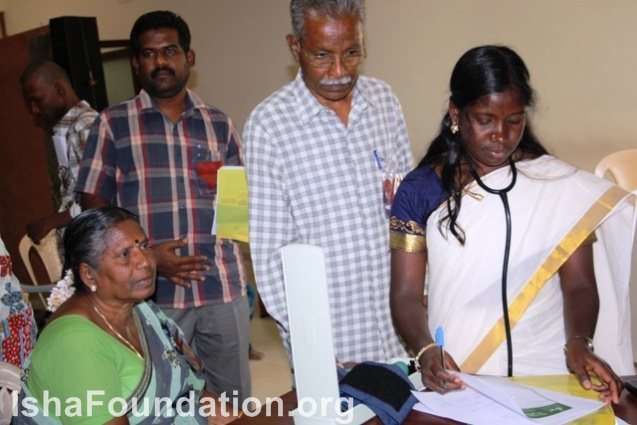 After the inaugural speech, participants consulted with the 6 Siddha doctors and 1 allopathic physician at the health camp. Siddha is an ancient South Indian form of medicine, which predates even Ayurveda. The doctors conducted Nadi Pariksha for each participant, which is a traditional diagnosis done by feeling the pulse. Every participant was identified by their Ayurvedic body type and were prescribed medicines, after which suggestions were made for the type of food that they can consume based on their body type. Allopathic consultation was done on a need basis. The participants were then given a traditional reflexology foot treatment called Pada Abhyangam, followed by a banana leaf wrap, which is known to have many rejuvenating and detoxifying effects.

After the Doctor’s consultation, participants were taken through a session on Health and Awareness related games, stressing the importance of fun and games in daily life.

There was an interesting presentation on Naturopathy by the doctors of J.S.S institute of Naturopathy, followed by a demo on natural foods, naturopathy therapies and their abundant benefits.

Isha Kriya, a very simple, yet powerful yogic tool was offered to the participants, emphasizing the role of yoga in rendering good physical and mental health.

The session concluded with a health lunch demo which included sweets and vegetable salad, showing how the right food intake can improve health and drive diseases away. An Arogya Kit containing various health-related items and dietary supplements were given to participants as a complement.

The program was organized for the benefit of people caught up in the hectic pace of modern life. In a few hours, Arogya Pariksha evaluates the health status of the participant through traditional health systems, and educates people about healthy ways of living, thereby creating health awareness.