Sadhguru explains the science behind the Bhrigu Samhita, which is used to predict people’s future.

ArticleJun 2, 2016
Sadhguru explains the science behind the Bhrigu Samhita, which is used to predict people’s future.

Sadhguru: Bhrigu was one of the Sapta Rishis, the first seven disciples of Shiva. It was an everyday process for them to go around Shiva thrice, to offer their devotion and obeisance to him. Bhrigu was a very ardent devotee and a little possessive about Shiva, and one day he thought, “Why should I go around Parvati? I have nothing to do with his wife. I want to go only around Shiva.” So he told Parvati to move away. Parvati was very angry and refused. So, Bhrigu became a small bird and went around only Shiva, leaving Parvati out. Shiva looked at this funny situation, while Parvati was getting angrier and angrier with Bhrigu insisting he would go only around Shiva. 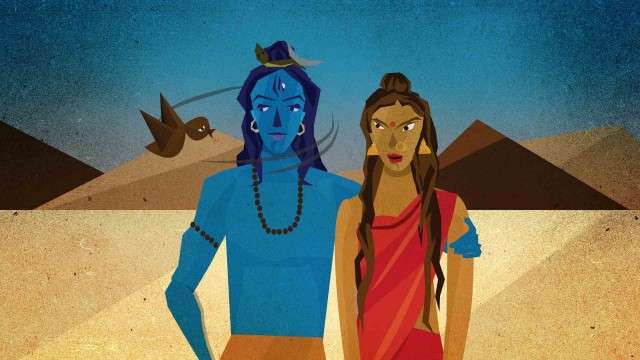 Wanting to see what Bhrigu would do, Shiva drew Parvati onto his left lap, leaving no space between them. Bhrigu turned into a bumble bee and went around only Shiva’s head, again leaving Parvati out. She got even more furious, “What is this rubbish?” Shiva was very amused with the drama, and pulled her in, making her a part of himself, till they were sitting as one. He shed one half of himself and included her, and became an Ardhanari. Then, Bhrigu, as a bumblebee, bored a hole, again making sure that he would go around only Shiva. Parvati was so furious that she cursed him, “Let your body decimate! Forget going around Shiva, you shouldn’t be able to take a single step, you must become like that.”

Bhrigu lost all his muscle and just became bone and skin. He couldn’t even stand. Then Shiva interfered and said, “What have you done to him? He is a devotee. Devotees are insane. He is not doing this out of any disrespect to you. If you had just told him ‘I am also Shiva’, he would go around you too. Why did you have to do this to him?”

But it was too late and he couldn’t do anything now, so Shiva gave Bhrigu a third leg to stand on. You will see outside certain Shiva temples, there will be an image of a man with three legs, a tripod. The third leg not only became a leg to stand up on, it also became a leg through which he could perceive the three worlds. It is a symbolic leg.

With this perception, he created what is known as the Bhrigu Samhita – this was a map of how human beings will be, till the end of the solar system. He was not talking about individual human beings, he was talking about humanity – how it will evolve, what it will do, the kind of human beings who will come and depending on the many combinations and permutations, what situation will come towards them.

As an analogy, suppose you make a sketch of the movement of the wind, you would know how the wind would move depending on the location of the high and low pressure areas. Similarly, Bhrigu made a map of human consciousness – the kind of womb a human being would move into, what will happen and so on. He went into this elaborately, and also trained people who would be able to read these maps.

It takes training to read an elaborate map. If you have seen aeronautical maps, they are fairly complex – the planet is round, it’s spinning, time zones are changing – all this is factored into the map. Someone who knows how to read it can tell you everything you need to know in two minutes. If you haven’t been trained, you can spend days with it, and still not know.

Get weekly updates on the latest blogs via newsletters right in your mailbox.
Bhrigu made a map of human consciousness – the kind of womb a human being would move into, what will happen and so on.

Similarly, Bhrigu trained people with a certain dimension of intuitiveness to read this, because this was not all logical stuff. When you sit in front of these people, they are not looking at your background or your future, they are just reading a map – an intuitive map – and trying to interpret how situations will unfold. The interpretation may not always be right because that depends on the expertise of an individual person – not everyone can interpret the same way. But the fundamental reading will be correct. For example, meteorologists can predict that it will rain by looking at the air pressure, humidity and other factors, but it is not 100%. It may be slightly off. Instead of raining here, it may rain there, because nature moves a little bit, but somewhere some precipitation has to happen when certain dynamics change in the atmosphere. This is just like that.

These persons cannot do this unless they are in a certain state. Usually, it should happen around specific temples, but nowadays they are moving around for commercial reasons, and it may not be as effective, but there are still some who are bang on.

Does this mean destiny is fixed? Destiny is not something fixed by someone. It is your own karma. If your “software” is in a certain way, it will naturally function that way. Let’s say someone predicts: “You will live for this many years”. You may jump off the mountain the next moment! The physical body and mental structures are something you built, so you can destroy these two things. However, you cannot touch the other aspects of life. They will anyway happen the way the software is. What these people are reading is your software.

Nothing is predetermined, not even death. Everything has been created by you.

Suppose you have a certain type of software on your computer, even if you smash up the computer, if you pop the hard drive into a new system, the same thing will come on in a new computer. So you may jump off the mountain today, but you will get a new “computer” sometime later with the same software. The same thing will happen, nothing new.

But if you are on the spiritual path, they will refuse to predict your future – if they are genuine. Because when anyone says “I am on the spiritual path,” what it means is, “It does not matter what nonsensical karma I have, I am going the way I want to go. I am going to go towards liberation. It does not matter what other factors there are – what society maybe saying, what my genes are, what my karma is, what the planets are saying – I will go where I want to go.” That is what spirituality means – taking destiny into your hands.

Shiva
Related Content
article
6 Remarkable Stories of Agastya Muni’s Life
One of the Saptarishis and a direct disciple of Adiyogi Shiva, Agastya Muni was a being of tremendous proportions. His tireless efforts ensured that the spiritual process became widely available to the common person.
Dec 20, 2021
article
Ganas of Shiva – Demented or Celestial?
Shiva's ganas are famous in the Yogic lore as his constant companions but little else is known about them. In this blogpost, Sadhguru reveals more about these mysterious beings.
Dec 2, 2021
article
Agastya Muni - The Father of Southern Indian Mysticism
Find out why Agastya Muni was known as the father of Southern Indian mysticism, and what his efforts to spread the spiritual process have to do with Sadhguru.
Nov 22, 2021
Close