This is the last of the three-story series on Sadhguru School, until we come back with more stories from this beautiful school in Western Uganda, run by Isha meditators for rural children.

We were blessed with a flying visit, literally, from BBC Big Cat Diary presenter Jonathan Scott, who dropped in by helicopter to squeals of excitement by 50 small aspiring pilots (Coincidentally, the children had had “flying lessons” a few days ago). Jonathan regaled the kids with fabulous anecdotes on cheetahs, lions and leopards. As Jonathan talked to the starry-eyed children, he shared about how his teachers had advised him against choosing wildlife photography as a career option. When he met his old teacher recently, he said, “The best thing you did in your life was not to listen to my advice!”.

We celebrated June's International Day of Yoga (IDY) in a big way at Sadhguru School. We organized an eight-day Yoga workshop for Years Two and Three (ages 7 to 10), led by a wonderful Isha Yoga teacher who joined us from southern India and who wooed us within minutes by sharing that Sadhguru School children had a healthy balance of vivacity and attention.

The children have been doing 15 to 30 minutes of simple daily Yoga since we opened in January 2017. During this workshop, the kids learnt Surya Shakti (a dynamic form of sun salutation, which cultivates great physical fitness and strength); they played games, learnt about caring for themselves, each other and the environment, drew pictures of what they had learnt and put together a grand finale of dancing and singing, performed with much aplomb for their parents who were the audience for the day. 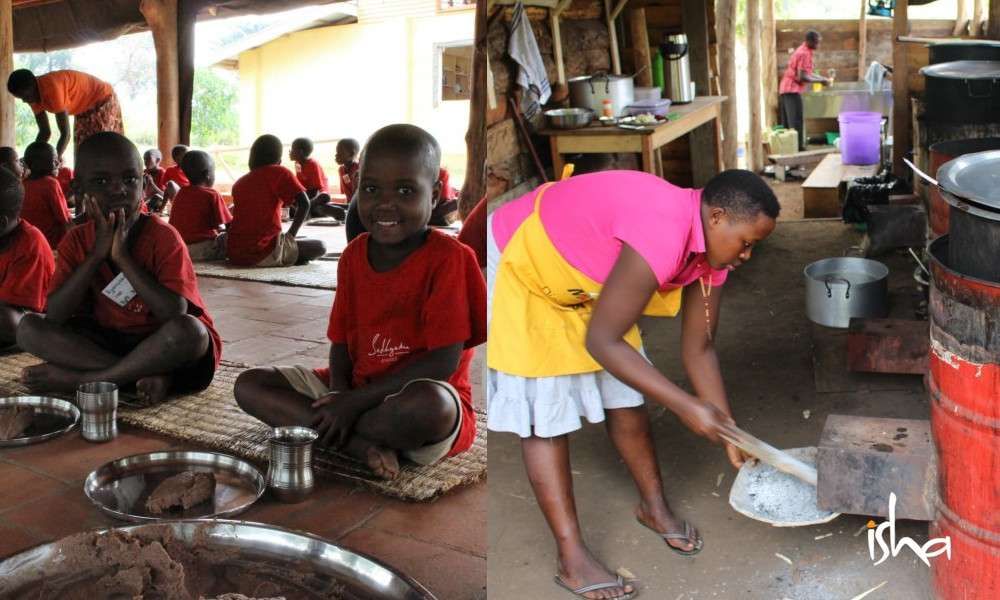 Meanwhile, for each of the eight days, the imperturbable Stina from Sweden, who has been a volunteering angel in the kitchen, was teaching our kitchen staff exotic recipes such as banana/chia seed (now grown in Sadhguru School vegetable garden) and cinnamon smoothie, chewy banana biscuits, date energy balls, pumpkin and coconut soup, hibiscus honey tea, and lettuce/cucumber/parsley/coriander sandwiches (all grown at the school and made with homemade brown bread.) These were all tentatively debuted for the kids at the end of their morning Yoga sessions. So far we had been sticking to a fairly conservative menu based on the traditional local diet. We honestly thought they would pull the lettuce and cucumber out of the bread, but within seconds the healthy sandwiches started disappearing and the kids were joyfully begging for more!

So as life continues at Sadhguru School in Western Uganda, every day is a new opportunity for these children and for the teachers as well, to learn, grow, experience and expand.

Editor's Note: The first batch of students come entirely from the local community, in which the parents are either subsistence farmers with no cash income, or earn between $35 and $80 per month from contract work digging in local fields, or from work on building sites. To support these children and their education, click here.