Sadhguru talks about the connection between mysticism and snakes, and the power and energy of this mysterious creature.

ArticleFeb 28, 2013
Sadhguru talks about the connection between mysticism and snakes, and the power and energy of this mysterious creature.

Sadhguru: Mysticism and snakes cannot be separated. Wherever there was an exploration or experience of mysticism – in the ancient cultures of Mesopotamia, Crete, Egypt, Cambodia, Vietnam, and of course India – snakes were always there. There is no Indian temple without a snake. One aspect of it is symbolism, because in yoga, a coiled-up snake symbolizes kundalini. But the reason for this symbolic status is because when celestial beings – those who are in consciousness and capability superior to human nature – entered this dimension of existence, they always took the form of a snake. This finds mention in every mythology on the planet. In India, there are innumerable stories, starting from Shiva being a Naga Bhooshana.

Mysticism is a certain dimension of perception and the snake has come endowed with that capability. That is why the highest form of perception, which is the opening of the third eye in Shiva’s forehead, is punctuated by the presence of the snake. A reptile would usually be crawling on the ground, but Shiva has it over his head to indicate that, “In some ways, he is even better than me.” Every culture has recognized this in one way or the other. There are a number of stories of snakes and the role they played in our culture.

In mythology, there are Naga Lokas in the netherworld – a whole society of not just snakes, but human beings who belong to the snake clan. They are known as Nagas, and they played a very important role in shaping the consciousness of this nation and many other cultures. Historically, we know that the great temples of Angkor in Cambodia were built by Naga descendants. They went from India, intermarried with the indigenous people, and established a kingdom. Nagas were ruled by queens, not kings, as they were matriarchal families. Later on, Kaundinya, a Brahmin king from India, went and defeated the Naga queen.

Human beings who are very deeply associated with snakes exist even today. I am one of them – not a Naga, but my life and snakes cannot be separated. Every significant event in my life is always punctuated by the presence of a snake.

An Ear to the Ground

If one becomes very meditative, the first creature which is drawn towards that is a snake. This is the reason why you always see images of sages and seers with snakes around. It has such a sense of perception that it can perceive certain dimensions which human beings are longing and desperate to know.

During the Dhyanalinga consecration, when we were consecrating the Vishuddhi chakra, over 400 people had gathered, but one snake would somehow creep through the crowd and come to us. Any number of times we picked it up and left it out in the forest, but within half-an-hour he would be back again. He did not want to miss the consecration!

The snake is the first creature which will know even the slightest fundamental change that happens on this planet, because his whole body is in touch with the ground. He has no ears; he is stone-deaf, so he uses his whole body as an ear. He truly puts his ear to the ground. If there is going to be an earthquake in California, a snake in the Velliangiri Mountains can tell you this at least 30 to 40 days ahead of time. Its sense of perception with regard to the planet is so very keen and sharp. 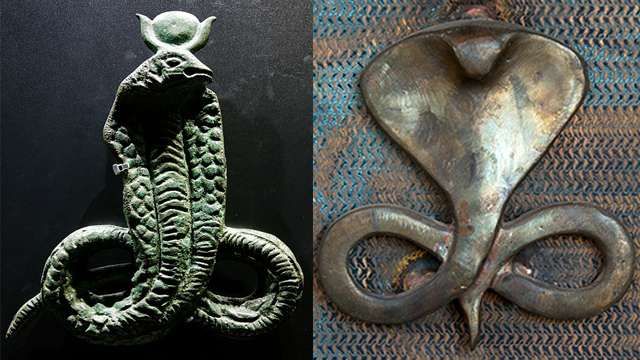 Left: The Egyptian goddess Isis is represented as a snake in this approximately 2000-year old relief.
Right: The snake depicted above the threshold of Linga Bhairavi.

All the Goddesses in the world – the Middle Eastern, North African, Mesopotamian, South Asian, Central European – are always symbolized together with snakes. At Linga Bhairavi, sarpa seva is available for people every full moon day. Here, the two snakes are in an embrace. They are not in entanglement. An embrace happens out of involvement. Entanglement happens out of compulsive needs. They are in a certain embrace and a certain dance to bring this forth into everyone’s life. Once a month, these snakes are filled with the earth taken from a termite mound mixed with certain other substances. This is a way of making use of the snake to enhance one’s perception.

Sarpa Seva
Sarpa Seva is an offering made to the intertwined Divine Sarpas at Linga Bhairavi, by any two individuals who share a relationship, such as husband and wife, brother and sister, or business partners. This arpana can bring significant transformation in their relationship. It also aids in building a strong constitution and improves fertility.
Sarpa Seva is also available for those seeking to ward off naga dosha, marital obstacles, major hurdles, lack of prosperity or progress, and chronic ill-health.
Ningizzida (Sketch of inter-twined snakes)
Isis-Thermoutis_Louvre_E25950 (Green snake)