Krishna in Mahabharata – Treachery at Kurukshetra

Questioner: Krishna in Mahabharata, always talked about dharma and adharma, but during the Kurukshetra war, he used deceit to kill most of the great warriors, such as Bhishma and Dronacharya. Did he not practice what he taught?

Sadhguru: What Krishna did in the battlefield was not just deceit – it was absolute treachery. There were intricate strategic formations in which the warriors fought. One such formation, called chakravyuha, was almost impossible to penetrate, unless you knew its intricacies. Arjuna used to be the only one of the Pandavas who had this knowledge. When his wife Subhadra was pregnant with Abhimanyu, Arjuna spoke in the presence of his unborn son about how to penetrate a chakravyuha, and even in his mother’s womb, Abhimanyu grasped it. But Arjuna did not talk about how to come out of the chakravyuha. Many years later, when the Kaurava army formed itself into a chakravyuha and was about to slaughter the whole Pandava army, Abhimanyu, 17 years of age but already a great hero, broke like a furious arrow through the chakravyuha, because he knew how to penetrate it. Bhima and Yudhisthira tried to follow him to save him, but when Abhimanyu went into the center, immediately, the chakravyuha closed again. In the middle of the chakravyuha, with no one else to support him, he killed many key people of the Kaurava army. Then his chariot went down. All his weapons were broken. You are not supposed to kill an unarmed person, but the Kauravas thought, “Even if he is just 17 years of age, he causes too much devastation.” They felt they must put an end to Abhimanyu and attacked him. Abhimanyu picked up a chariot wheel and fought with that. No one person alone could kill him, so many of the Kaurava heroes gathered around Abhimanyu, which was totally against the laws of the battle. They all surrounded the boy and killed him. 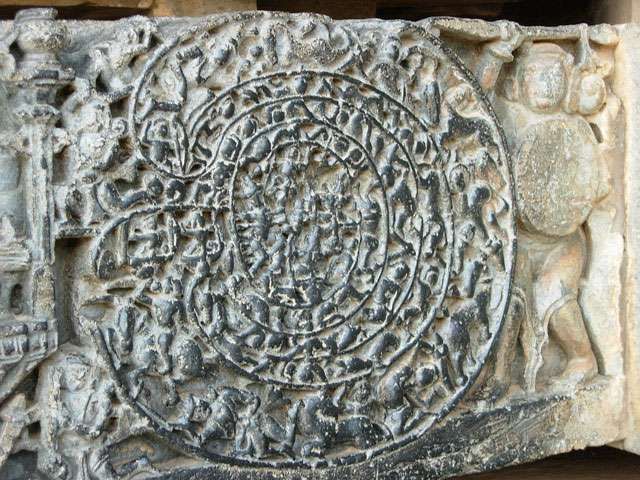 It was a rule of the war that when the sun sets, they must stop fighting. In the evening, when Arjuna came back to his camp, he saw his people mourning and realized that Abhimanyu had been killed in such a way. In straight battle, only very few men could have defeated Abhimanyu. Someone described how they had surrounded him from all sides and slain him. Arjuna took a vow: “By tomorrow sundown, I will have killed Jayadrada. Otherwise, I will kill myself.” Hearing this, Duryodhana was overjoyed. He thought all they have to do was to completely protect Jayadrada, and Arjuna would die that night by his own hand, because he would stick to his word.Jayadrada was terrified. He wanted to quit the battle and go home. Duryodhana told him that this would not be good for their reputation. He said to Jayadrada, “Don’t worry. We will deploy all our forces to protect you.”

The next day, they formed a huge protective formation forJayadrada so that he would not get killed. But from the first moment of the battle, Arjuna started penetrating through the opposing army towards Jayadrada, because if he did not kill Jayadrada, he would have to kill himself.

At the same time, Satyaki and Burishwara got into a fight. Satyaki, a close friend of Krishna and Arjuna, had an old feud to settle with Burishwara, who was over 70 years of age but still a great warrior. Satyaki was supposed to protect King Yudhisthira. But overcome by personal emotions, he left Yudhisthira’s side and went towards Burishwara to attack him. When Arjuna saw that the king was left unprotected, he got concerned. But he could not divert his attention, since his own life was at stake. He continued to go towards Jayadrada. Satyaki attacked Burishwara, but after some time, Burishwara knocked down Satyaki from his chariot. Satyaki lost all his weapons and almost fainted. Burishwara descended from his chariot and put his foot on Satyaki’s chest. Krishna saw this. Satyaki had been a staunch and a reliable lieutenant to him for many years. Krishna knew his abilities and limitations, and that Satyaki could not defeat Burishwara.

Map showing the place Kurukshetra, in the state of Haryana, India.

Krishna told Arjuna, “Burishwara is going to kill Satyaki. You must get Burishwara first before he kills Satyaki.” Arjuna said, “How can I do that? Burishwara is fighting with Satyaki. Shooting him now would be against the Kshatriya dharma.” Krishna told him, “Satyaki has come here only to fight for you. How can you let someone kill him now? Save him.” Arjuna said, “No. It is against the law.” Then Burishwara pulled out his sword in order to decapitate Satyaki. Again Krishna said, “Your friend, who put his life at stake for you, will be slaughtered now if you don’t reach out to him. Will you let him die like this? What kind of dharma is this?” All this time, Arjuna’s arrow was aimed at Jayadrada. When Burishwara was about to decapitate Satyaki, Arjuna turned and shot the arrow at Burishwara. Burishwara’s right hand got severed. He looked around and said to Arjuna, “How could you do this? While I was fighting with another man, you shot me from behind and severed my hand? Anyone who has Kshatriya blood in him wouldn’t do such a dastardly act. I know you wouldn’t have done this by yourself. This cowherd with whom you are must have influenced you.” Arjuna’s anger flared up, and he said, “Yesterday, when you, a great warrior, joined many others to surround my son, a 17-year-old boy, and stab him from behind, where was your dharma? What are you talking about now?” Ashamed of the act that he had committed the day before, Burishwara put his head down. He went next to his chariot and sat down in lotus posture.

Satyaki became conscious again and looked around, completely bewildered. He did not know what had happened. When he saw Burishwara sitting there, his old emotions and rage took over. Burishwara’s severed hand, still holding his sword, was lying there on the ground. Satyaki threw the hand away, picked up the sword, and went towards Burishwara. Both Krishna and Arjuna were screaming, “Stop! Don’t do this, Satyaki!” But Satyaki loped off Burishwara’s head, while the latter was sitting with eyes closed. Krishna put his head down; he had not wanted this. Arjuna was totally aghast about what Satyaki had done. But Satyaki was exalted, because he had been able to take revenge at last.

Day by day, as the war went on, all dharma was broken. The first day, they fought by the law. The second day, they started breaking the law, and by the fourteenth, fifteenth day, all law was broken. People did what they wanted and killed each other at will.

Arjuna continued to penetrate towards Jayadrada, but it looked like Jayadrada was out of reach for him. The whole Kaurava army had rallied around to protect him. When Krishna saw that there was no way for Arjuna to defeat Jayadrada in this situation, he used his magic and made a huge cloud appear, so that it looked like it was sunset. Seeing this,Jayadrada was absolutely thrilled and relieved, because he thought the battle was over for the day, and he had survived, which meant Arjuna would die that day. The whole Kaurava army was exalted and shouted slogans of victory. Everyone had put their arms down. But the sun came back, and Arjuna shot Jayadrada and he fell. One more deception.

As if that was not enough, when Karna and Arjuna came to fight, Krishna interfered again. Karna and Arjuna were evenly matched in their martial arts. For everything that Arjuna did, Karna had an answer. But Karna had one special weapon, the astra, for which Arjuna had no answer. Karna aimed it at Arjuna’s forehead, and was about to shoot and kill him. When Krishna saw this, once again using his magic, he made Arjuna’s chariot sink a few inches into the earth. The weapon knocked off Arjuna’s crown and made him faint for some time, but it did not enter his head as intended. Many times, Krishna did such things. This was much more than just deception.

Pandavas lose the game of dice, Draupadi is presented in the court.

What is the justification? It is not that his dharma is higher and someone else’s is lower. What they were facing in the war was colossal evil. The level of injustice that Duryodhana, Shakuni, Karna, and all the others created from day one was too high, from the time they tried to murder Bhima by poisoning him, and by tying him up and putting him in the river. Then the game of dice, which was total cheating, and the disgrace of trying to disrobe Draupadi in public. Then trying to burn the Pandavas in the palace that was built of lac and sulfur, and again cheating them out of their kingdom. There was an endless number of events that led to this war. Everywhere, they used deceit without any qualms. When they were at an advantage, there was no dharma for them. When they were at a disadvantage, they were talking dharma as a tool to benefit from. But the next moment, they were the same again.

Krishna in Mahabharata says, “What they are doing is adharma; what we are doing is also adharma, but we are doing it with an intention of establishing dharma. They are doing it with the intention of establishing adharma.” It is not a question of right and wrong. It is a question of purpose, and of whether you would be successful within the limitations of the law or not. He did not say what he was doing was right – he knew it was wrong. But what he was trying to achieve was right. That is why he did all this.

Editor's Note:  Watch the Leela series, where Sadhguru explores the life and path of Krishna.

Stories of Yudhisthira's devotion to Krishna, and a little-known story of a group of monks and their devotion to Shiva, illustrate how devotion is a tool for dissolution. Explore the power of devotion in this intense series, Devotion. Only on Sadhguru Exclusive! Watch now.

Mahabharat
Krishna
Related Content
article
How Krishna Killed Kamsa
Kamsa makes a cunning arrangement to kill Krishna but his plans are foiled as Krishna beats the gigantic wrestler Chanura and comes face-to-face with Kamsa. Find out how Krishna killed Kamsa..
Jan 24, 2015
article
Mahabharat Episode 43: The Worst Crime
As the great war begins in Kurukshetra, Arjuna is having some doubts. In one of the most famous dialogues of all time, the Bhagavad Gita, Krishna explains to Arjuna how hesitation is the worst crime.
Nov 18, 2019
article
Mahabharat Episode 46: The Feud’s Bloody Climax
Bhima outfought by Duryodhana looks to Krishna. The war comes to a close, but not the slaughter.
Dec 31, 2019
Close