Sadhguru explains that the presence of Dhyanalinga allows you to experience the exuberance of life, and at the same time gives you access to the stillness which is the very source of creation.

ArticleJun 27, 2019
Sadhguru: The sound of the drum, the burst of cracker, a scream, a clap of thunder, a rustling of leaves, and a million other sounds – all this makes up human experience. Sound is essentially a vibration; so is what you see, so is what you touch. Everything that you know as creation is a certain reverberation. That which is between sound and silence, between reverberation and stillness, has been called by many names, has been distinguished and identified in many different ways. Traditionally, we call it Shiva and Shakti. Certain other cultures refer to it as yin and yang, masculine and feminine, the logical and the intuitive, or just this and that. There is nothing wrong with this and that, but they are a surface happening.
Dhyanalinga is a manifestation of one who has climbed, so that he can inspire those who have not bothered to climb as of now.

Dhyanalinga is a miraculous manifestation of this and that, but rooted in just this and this. So am I, so are you, so is everything. You may refer to yourself as a woman, you may refer to yourself as a man, but essentially, you are both. Both cannot exist without each other because they are both rooted in the same thing. It is like the flower and the fruit. It is like the soil and the tree – the same, but different. If we can merge two diametrically opposite things, these two are like the two posts of a ladder. The two posts of the ladder are needed for one to be able to climb. At the same time, if you believe there are two, you cannot climb; it is just one ladder. 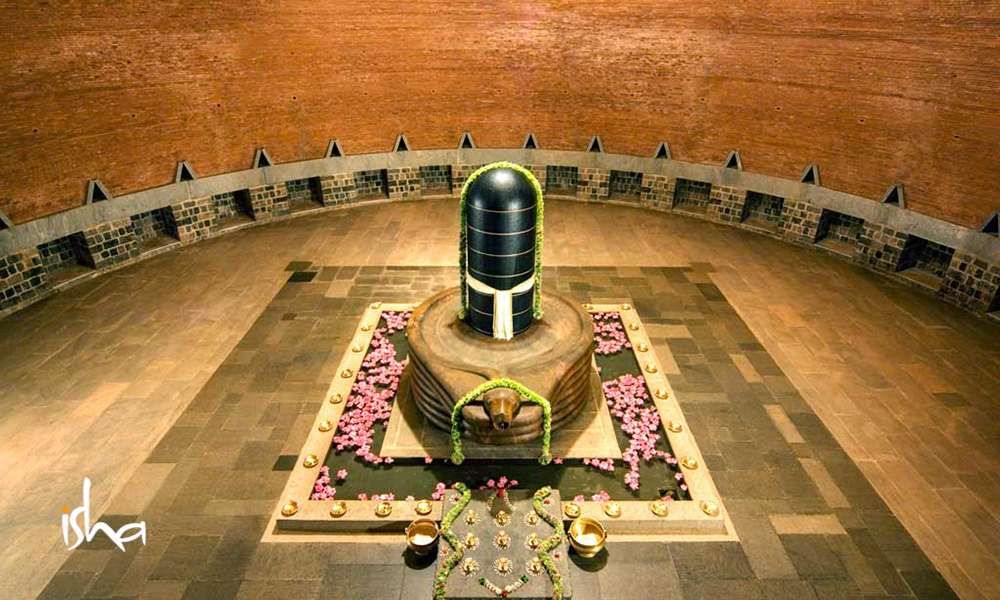 So Dhyanalinga is a ladder like that. Dhyanalinga has seven rings, but they are like rungs of a ladder. The human system also has seven rungs. Everything is made like that. The question is only, “Will you climb, or will you not climb?” Dhyanalinga is a manifestation of one who has climbed, so that he can inspire those who have not bothered to climb as of now. But everything is rooted in just one, this and this. It is wrong to call it one. If this and that are one and two, then this and this is a big zero.

The whole creation is rooted in that zero or that nothingness. The vastness of the zero can never be matched by any number because that which is not is limitless. A number means it is limited. You may call it a zillion, but still it is limited. There was a time when ten rupees could buy what today hundred thousand rupees can buy. I remember my father, a physician by profession, was shocked when his grandson got a job as an IT professional and he started with a salary of thirty thousand rupees. My father was a little bewildered because when he started as a doctor, he got hundred rupees as salary. He said, “I got only hundred rupees when I started. This fellow, good for nothing, is getting thirty thousand to start with!” But today thirty thousand still cannot buy what hundred rupees could buy back then. So numbers are meaningful only within a certain context. This happened in San Francisco. A very smartly dressed young man was walking on the street. A completely unkempt, disheveled, dirty looking man came up to him and said, “Can I have two dollars for a coffee?” The young man’s nostrils curled up and he said, “How dare you ask for two dollars? You can get a coffee for a dollar or less.” The other man smiled and said, “I was thinking you would join me.”

The Significance of the Zero

What you think are opposites have been joined in the process of creation. You can play with this as much as you want, but if you lose sight of the sameness of creation and get lost in the duality of creation, then your drama will begin. Your drama will begin, but you will not be the director; you will only be an actor, and it could be a tragedy! You may be a hero or a heroine, but it could be a tragic drama – who knows? Generally, most famous plays have been tragic. But if you are aware of the sameness, if you are aware of the zero of existence, if that has come into your experience, you become the director of the play. Tragedy or comedy, it does not matter, now you can play it as you want because you are directing the play. If you get identified with the duality, you become the play, and the play can go whichever way; especially when there is no director, it can be a tragic play. Any situation without a director is a tragic situation, most of the time; rarely does it happen well.

So being in the presence of Dhyanalinga is just this – all the seven chakras are manifest, so the whole range, the exuberance of life is available; but at the same time, it still leaves you as a zero. You know when you want to dance and move, “One, two, cha-cha-cha…?” Movement and numbers are the same. Stillness and zero are the same. If you lose sight of the zero, numbers will get you into such a chakkar– you do not know what you got into. If you are constantly in sight of the zero and play with the numbers, numbers are beautiful. Just imagine the number system without a zero. For the smallest things, you will go crazy. This is happening to a lot of people. Just to count one, two, they got married. Only two, the other two are yet to come, but already they are going crazy. Just one, two, is so complicated because you lost sight of the zero.

Dhyanalinga - Both Finite and Infinite

So Dhyanalinga is a possibility that reverberates the exuberance of numbers, and at the same time, the presence of the zero is immense. In its presence, it becomes very simple to know another dimension to life, which is the underlying dimension, the largest dimension of existence, and this whole play with just five elements. Look at the variety of life, look at the size of the cosmos, with just five ingredients. Isn’t this creation a masterpiece? With just five ingredients, how many things you can do is unbelievable.

Actually, in terms of the number system, we could have just counted with one hand instead of two. “One, two, three, four, five,” or we could have said, “One, two, three, four, ten” – we could have added a zero right here. Still it would have worked. As long as you have a zero, you can make it work whichever way you want. This is so with the number system; this is so with your life. As long as you are in touch with the limitless zero of your life, you can make it work whichever way. The problem with your mind right now is that you have lost sight of the zero. So you do not know what is today, what is yesterday, what is tomorrow. Such a simple thing, but it is all mixed up. Yesterday’s things are still living within you. Why only yesterday? Previous life nonsense is still living within you. Things which are yet to happen tomorrow are already troubling you. Something that happened ten years ago still hurts you; something that may happen day after tomorrow already troubles you.

Once you lose sight of the zero, you do not know what today is, what yesterday is, what tomorrow is – it is all mixed up. Once, Shankaran Pillai went to the psychiatrist and shared many things. After listening to him for hours, the psychiatrist said, “See, none of the things that you have said have actually happened.” So Shankaran Pillai said, “No, don’t tell me that! If I realize that, I will start worrying why they did not happen!” People enjoy their hallucinations; that is a big problem. If you are in sight of the zero, numbers will be just a number game. Otherwise, it can go on and on. It can just go on into zillions and drive you to madness.

The Miracle of Dhyanalinga

So Dhyanalinga is that tool, where though you are playing the five elements, essentially it is one big zero. Everything comes from nothing, and everything goes back to nothing. Everything comes from zero, and everything goes back to the zero. Dhyanalinga is a strong reminder, an exuberant manifestation of life, at the same time absolutely still like nothingness. The stillness of nothingness and the exuberance of everything installed in one – that is the miracle of Dhyanalinga. When I use the word “miracle,” people think that if I open this vessel and a baby elephant comes out, it is a miracle. That is not a miracle. Let us leave the production of elephants to elephants. You do not have to pull them out of copper vessels.