An expert in anything to do with snakes, Sadhguru enjoys a close friendship with these graceful reptiles. 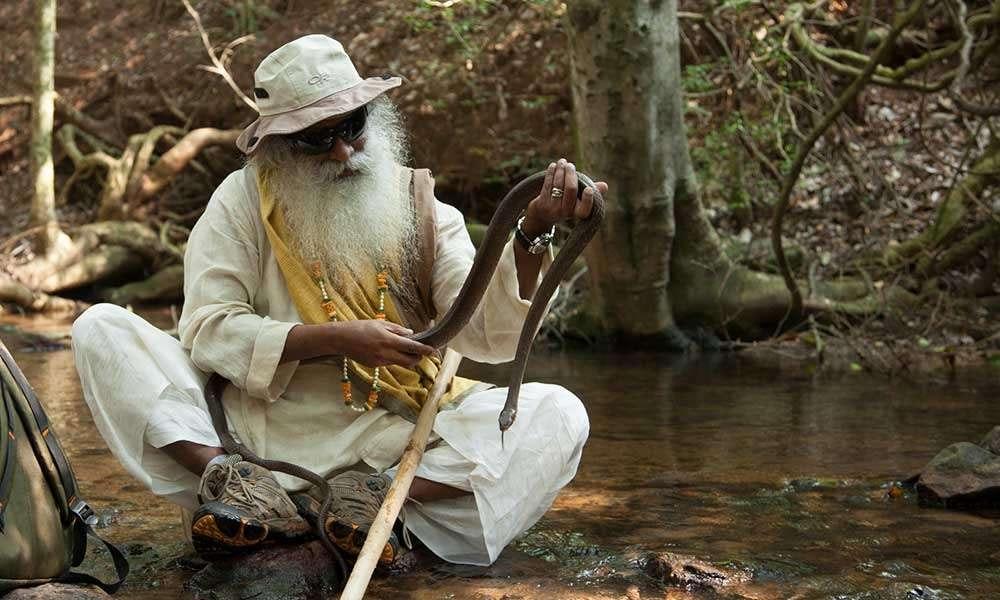 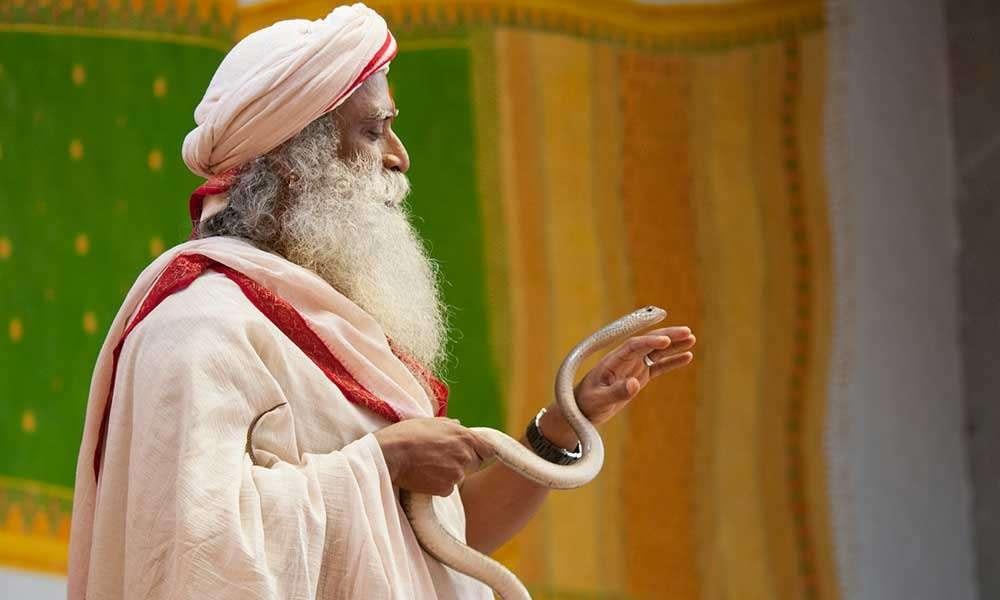 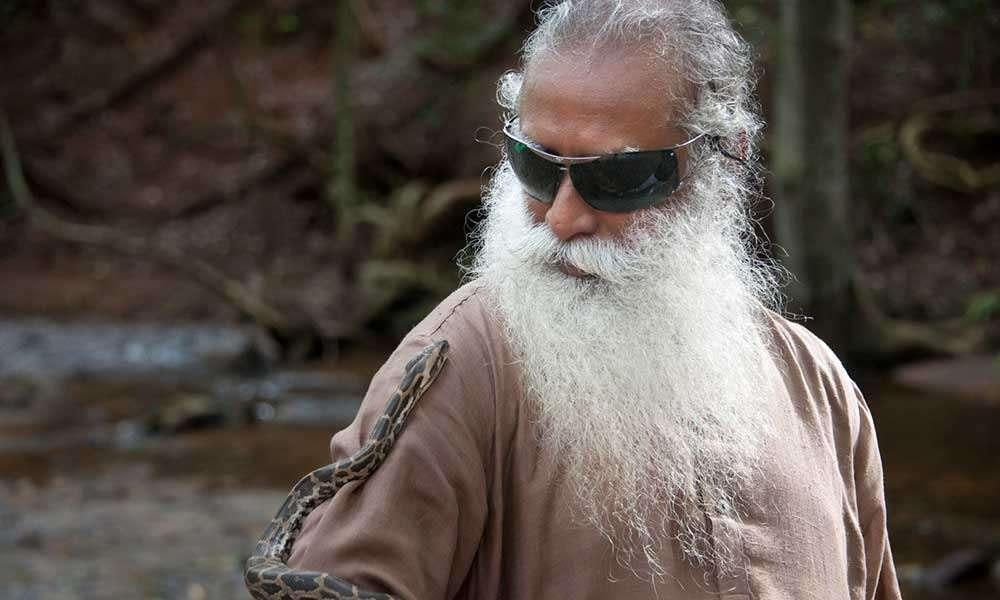 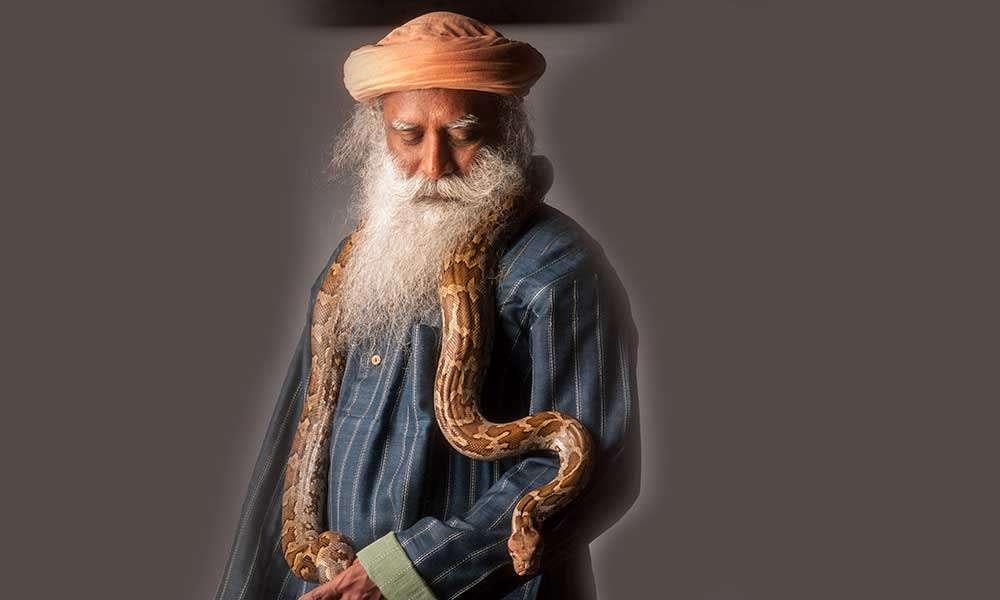 Snakes have always been a constant presence in Sadhguru’s life. Cobras especially seem to have an affinity for Sadhguru!

Sadhguru: Snakes are comfortable with anyone actually. One reason why the snake is worshiped in India is because it is a symbolism of kundalini. In India, if a snake dies they give it a proper funeral, because in the evolution of the body, a monkey is very close to human beings but in the evolution of the soul, a snake and cow are very close to the human soul. It is because of this that energy-wise, snakes are very comfortable in the human hands if you don’t get alarmed and agitated. Among wild animals, it doesn’t matter which animal, even an insect will not be comfortable if you catch it. It will immediately react to you. But the snake is one animal where you can just pick it up gently and it just won’t do anything to you if you are not agitated.

I could easily track a snake in the wild. I would smell it and just go and catch it... I would know under exactly which rock the snake would be at that moment.

I developed a certain keen sense, which has gone out of my system these days because of a lack of application. I could easily track a snake in the wild. I would smell it and just go and catch it. If I went to some spot on Chamundi Hill, I would know under exactly which rock the snake would be at that moment. These days I have lost that sense - too many people and too much city stuff around me.

When I was in school, it had a very large campus so snakes were very much part of the scene. Most people were just terrified of snakes but I could just catch them. It was not a very big deal and slowly I gained a reputation where if a snake was seen anywhere in the town, they would call me to catch it. Once, I went into a tubelight factory in the afternoon after they called me. They had seen a big cobra and the whole factory with about 25 or 30 people had come to a standstill. There was a lot of excitement and I went and caught this cobra which was almost 12 feet long. I kept it as a pet with me under my bed in a big jar.

Then one day my father went into my room and he heard some noise. He bent down and looked but he couldn’t see anything. Then he looked under my bed and saw the snake and freaked out totally. He was hopping mad when I came home. He was so terrified and everyone was standing on the chairs and sofas though the snake was still in the jar. They asked me to leave it out but I put it on the terrace. The snake was with me for almost 3 years. Later on I let him go in my farm.

Once, when I was about seventeen, I was by myself near some rocks in the evening when I noticed a cobra. I picked up this snake and it turned out there were two of them together. It was not the mating season but for some reason they were together. So when I picked up one, the other fell on my foot and bit me four times. I got on my bicycle, went to a nearby house, and told the lady, “I’ve been bitten by a cobra. Can you make a jug of black tea for me?” I drank about four or five cups, came home, was feeling a little drowsy, and thought, “This is it! What’s the point talking about it?” So I told my mother, “I’m very tired. I just want to sleep,” and I went to bed. I thought I would not get up the next morning. When I woke up the next morning, my eyelids were heavy and my joints were a little stiff but I did wake up, and here I am!

Many times in the night they would want the warmth of my blanket and one of them would crawl in.

There was a time when I used to have twenty live cobras all over my bedroom. They would be just everywhere. It takes a certain level of alertness and awareness to live with them. They are very wonderful but one wrong move and you know what. I was living in a farm at the time and I just left them free in my bedroom. Many times in the night they would want the warmth of my blanket and one of them would crawl in. You learn to move slowly when you live like that. You don’t make any sudden moves and you learn to move every single muscle in your body carefully, cautiously, fully aware. Otherwise you will be dead. It does a lot to you.

Even today, I have some friends in my home. There is one who is over twelve feet long in my garden. When we decided to build a wall around the house, we decided to leave a hole in the western wall so that he can go out and come as he pleases. But he has such a sense of dignity that he refuses to crawl through this hole. He always comes through the main gate!

Wardrobe Unique
When it comes to wardrobe, one can certainly say that Sadhguru’s garb is not that of a stereotypical “yogi” or “my...
Article

My Master
Sadhguru’s poems are a regular feature in his books and blog posts. Here Sadhguru speaks about penning a series of...
Article 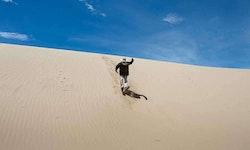 Adventure and spirituality
Sadhguru tells us that a spiritual process is not different from having an unbridled enthusiasm for life.
Article

Disappearing Act!
Sadhguru tells us that when he was young, he spent lots of time by himself in nature, often disappering into the f...