Shivanga Sadhana – Over 10,000 Devotees Become a “Limb of Shiva”

Over a 3-day period from January 15th to 17th, over 10,000 people were touched by the Shivanga sadhana offered by Sadhguru, becoming “Limbs of Shiva.”

Over a 3-day period from January 15th to 17th, over 10,000 people were touched by the Shivanga sadhana offered by Sadhguru. Shivanga literally means “Limb of Shiva,” and is a process available to both men and women. The sadhana for men lasts 42 days and began with an initiation on January 15th, the first Pournami of Uttarayana. For women, the sadhana is a 21-day process which began with an initiation on December 27th 2013 and culminated on January 17th 2014 at Linga Bhairavi on Thaipusam.

Shivanga for Men – Becoming a Limb of Shiva 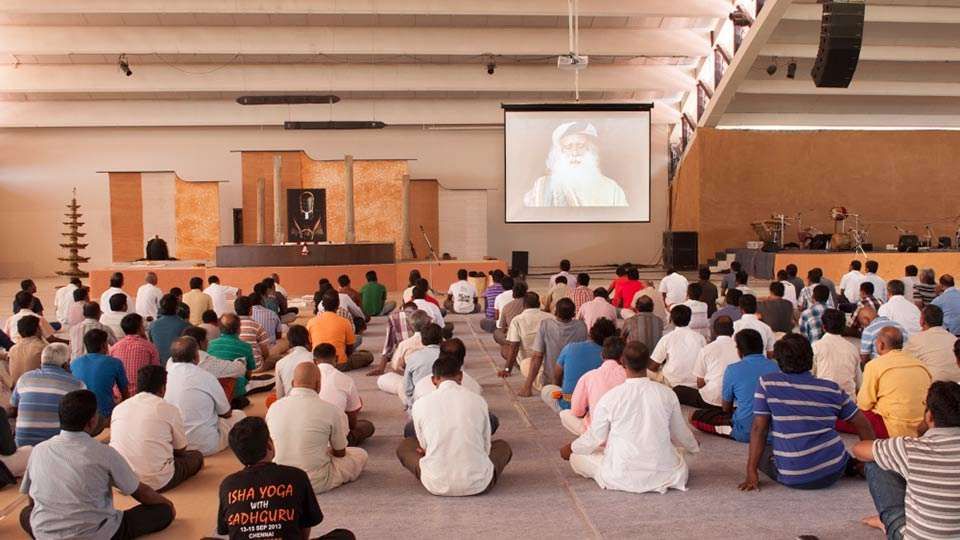 Close to 4000 devotees in several towns and cities in India and abroad were initiated on Wednesday, January 15th. Initiations took place in Chennai, Delhi, Mumbai, Bangalore, Hyderabad and several other cities across India, and in hundreds of centers in cities, towns and villages in the state of Tamil Nadu. Outside India, initiations took place in the US, UK, Singapore, and Lebanon.

The participants were initiated into the powerful Shiva Namaskar process and also into a potent chant as a part of the sadhana. The 42-day period culminates on Mahashivratri, when Shivangas will come to the Isha Yoga Center at the foothills of the Velliangiri Mountain and make offerings at the sacred space of the Dhyanalinga. The Shivangas will then make a pilgrimage to the Velliangiri’s sacred Seventh Hill, a space of tremendous power and energy. Though the Shivanga sadhana happens every lunar month, this particular period culminating on Mahashivratri draws the most number of devotees.

Shivanga for Women – A Flood of Devotion

On Thaipusam, a very auspicious day in the yogic way of life as well as in traditional India culture, the Shivanga sadhana for women culminated at the Linga Bhairavi. 6,142 made their offerings of coconuts and grains at Linga Bhairavi. The ladies were from diverse backgrounds. Executives from the largest cities in the world, housewives with husbands and children keeping them company, and farmers from the smallest villages and hamlets in Tamil Nadu came together in what was a flood of devotion at Linga Bhairavi.

Eleven devotees also undertook a Padha Yatra and walked a distance of 150 kms from the town of Mettur to Coimbatore, to express their devotion. The ladies began their journey on 10th January and completed it on the 16th. They were joined on the way by 90 more devotees at various points on their route, including 30 women from nearby Alandurai, walked with “live offerings” – pots brimming with the saplings from the grains that were a part of their daily devotional offering.

The celebrations began early in the morning at 6am, with devotional songs and a special arati offered to Linga Bhairavi Devi. After the morning arati, many devotees brought in their first harvest as an offering to Devi.

After annadanam was served to all devotees, Sadhguru held a special Thaipusam sathsang. He explained that in Tamil Nadu, devotion was very deep-rooted in the culture. The very land was held like a temple. He explained that the sadhana the women had taken up would be fruitful not only for themselves but would also be a way of bringing this culture of devotion to the world.

The temple stayed open and welcomed all until 9:30 pm, where many stayed on to experience Devi's grace.

Yoga
Related Content
article
Navratri - All About the Festival, Traditions, Sadhana, Quotes and More
Navratri is a celebration of the divine feminine that is replete with rich traditions like golu and dandia, elaborate rituals of worshipping Devi, and powerful sadhana that one can use for their spiritual growth.
Mar 12, 2022