Sadhguru: In the very nature of things, life can never get perfect – there is always room for improvement. But the geometrical alignment behind creation is in a certain state of perfection. Only because of this perfect geometrical alignment, life flourishes the way it does. If you look at human life, how fragile it is, and at the same time, how sturdy – how much a human being can do. This is because the geometrical design behind the creative process is so perfect.

Yoga means union. When an individual achieves a kind of perfection within himself, where in his experience, he has become one with everything, then he is in a state of yoga.

There is a whole science today that examines the geometry behind the atomic and molecular structure of every form, from an insect to an elephant, a tree to a river and an ocean, to planetary systems and the whole cosmos. In their fundamental essence, the geometry of all these forms, from the atomic to the cosmic, is absolutely the same, and it is such a perfect design that life is so gentle, so fragile, but at the same time so firm and so beautiful.

The pursuit of manifesting this fundamental perfection of geometry in one’s life led to a phenomenally complex and sophisticated system of yoga. The yogic system is all about how to get your whole system – the physical body, the mental structure, the emotional framework, the karmic structure, and the fundamental energy basis – into a perfect geometrical symmetry, so that you can achieve a union with the cosmic nature.

A little over 15,000 years ago, Adiyogi Shiva, Mahadeva, attained to this state of perfection. He became so absolutely still that onlookers could not make out whether he was truly alive. The only sign of life were tears of ecstasy running down his cheeks. From this state of absolute stillness, Adiyogi would suddenly spring into a dance of ecstasy. This tandava demonstrated that the perfect geometry that he achieved within himself is not a restraint – he need not sit in one place. He can dance wildly, in absolute abandon, and still not lose this perfect state of alignment within himself and with the larger cosmic nature. 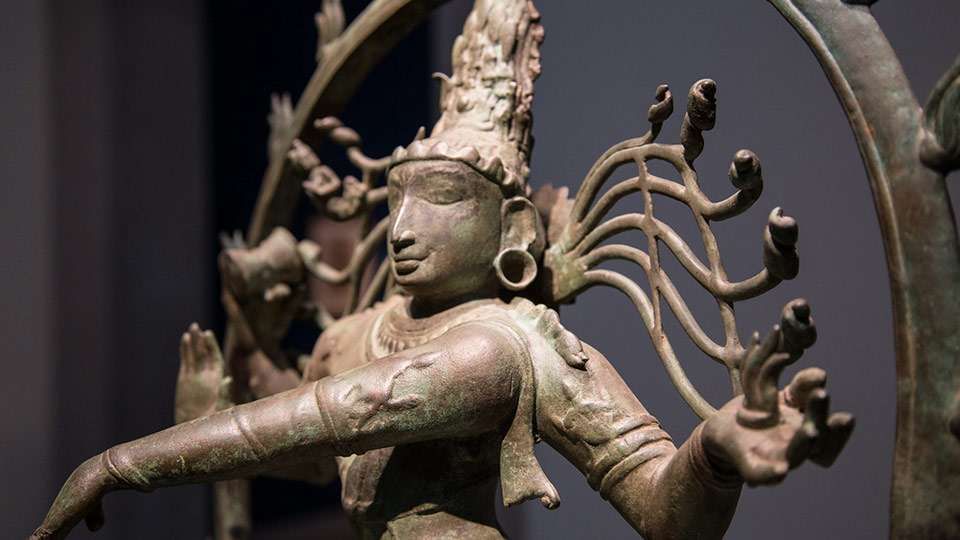 This tandava is an ecstatic manifestation of perfection and symmetry between the inner experience – which is known as bhava – the tune that is set by creation – which is known as raga – the rhythm that each individual has to arrive at – which is known as tala – and the cosmic nature. The bhava is a consequence of many factors. The raga is set by the Creator. But who will find the right rhythm or tala, so that even if you dance madly, you are still in perfect symmetry with the rest of the universe? Many yogis, seers, and sages, and above all devotees of Shiva, exhibited this possibility.

Yoga means union. When an individual, who is otherwise trapped within the boundaries of his own body and sensations, achieves a kind of perfection within himself, where in his experience, he has become one with everything, then he is in a state of yoga. This is a possibility that every human being carries as a seed within himself or herself. If you are willing to strive, you can experience the whole cosmos within yourself. There have been many stories about this state of yoga. For example, Yashoda seeing the universe in Krishna’s mouth, or the whole cosmos being described as Shiva’s body. A state of yoga does not mean standing on one’s head, or on one leg instead of two – yoga means being in a state of union.

This perfection of geometry can be attained in many different ways. Through intellect, through emotion, through energy, through sheer perfection of action, and above all through devotion – all these are essentially tools to come to a state of abandon. Only when you abandon your personality, which is a pile of karmic impressions, you are in a state of union with the rest of the cosmos.

There is always a longing for union. Whether someone is running after wealth, money, conquest, success, pleasure, or intoxication – it is just out of a longing for union. But these are inefficient ways of union. Yoga is not against anything except inefficiency. Having been on the top of the pile of evolution on this planet, we as human beings are expected to function a little more intelligently and in a little more competent way. For ages, people have attempted to come to a state of union that way, but it has never really worked for anyone. I want all of you to take this vow within yourself that we as a generation will do things in an enduring way. If we achieve union, we achieve union in an enduring way. This is something that all of you have to take deep into your hearts and minds.

This article is based on an excerpt from the April 2014 issue of Forest Flower. Pay what you want and download. (set ‘0’ for free). Print subscriptions are also available.

Creation
Yoga
Shiva
Seeking
Spirituality
Bliss
Wisdom
Related Content
article
What is Consciousness? 6 Myths Busted and 4 States Explained
Sadhguru defines consciousness and busts some common myths about a much misunderstood topic. Explaining that consciousness has nothing to do with the mind, he outlines different conscious states from a Yogic perspective.
Mar 21, 2021
article
Being Human is Super!
In an interview to Gulf News in Dubai, Sadhguru looks at the nature of human experience and how we can take charge of it.
Mar 19, 2017
article
Yogasanas – Creating Health, Joy and Blissfulness
Sadhguru looks at how yogasanas are a powerful process to enhance perception, and create a chemistry of health, joy and blissfulness.
Apr 13, 2015
Close