Devi Worship in India and Around the World

Sadhguru looks at how the worship of the feminine has largely disappeared today, but explains that there are still many powerful, intricately consecrated spaces in India.

Q: How important is feminine energy to our planet today?

Sadhguru: The worship of the feminine was prevalent right across the planet at one time. But unfortunately, a very ambitious approach to religion became the mode. When conquest became the mode, people burnt the feminine off the planet. And today, the masculine is the only way to be successful; we have even compelled women to become very masculine in their attitude, approach and emotion. We have made everyone believe that conquest is the only way to success.

But to conquer is not the way; to embrace is the way. Trying to conquer the planet has led to all the disasters we see today. If the feminine were the more dominant factor, or if masculine and feminine were evenly balanced, I don’t think we would have ecological disasters because worship of the feminine and the earth always went together. Cultures that looked upon the earth as Mother have never caused much damage to the environment around them; damage only happened when conquest was seen as the way of life.

Right now, even after all this damage to the planet, half the people still can’t even eat properly though there is enough food on the planet. If the feminine were dominant, the population would definitely eat, and compassion, love and aesthetics would be dominant. Instead, we chose the power of gross conquest over the subtleties of love and compassion. We chose to conquer life rather than embrace it. If the feminine were dominant, perhaps we would not have gone to the Moon or to Mars, but what have we really achieved by going there? We placed a flag, left a footprint and came down. What is the significance? The whole romance of the moon is now gone.

Our whole attitude towards life has become lopsided. I am not against scientific achievements, but we have lost the life-orientation of science. For most people, science and technology is only about using everything on the planet for our benefit. This attitude of exploiting everything is a very conquest-oriented, masculine approach. If the masculine and the feminine were evenly balanced, we would have lived much better lives.

Feminine worship is the most ancient form of worship on the planet. India, Europe, Arabia, and large parts of Africa were involved in goddess worship. But today, because of too much emphasis on the masculine worldwide, the only culture that still has feminine worship is India.

Just before the Dhyanalinga consecration, I went on a tour of Devi temples with a small group of people. At that time, I was not geographically very conversant with Tamil Nadu, so I chose to go to Karnataka because I know where the temples are. These are not the famous temples, but little temples in small towns and villages. I have known this from the past so we went in search of them because we wanted to settle certain things and we were looking for the right kind of space and energy to do it in. We could have created that at the Isha Yoga Center, but it would mean building a shrine and maintaining the space continuously. We were yet to consecrate the Dhyanalinga, so we did not want to go in for another temple to do these things.

We went in search of these temples and I was absolutely amazed. In little towns, sometimes even in little villages, Devi temples that were consecrated hundreds of years ago are still very alive – fully, forcefully and fiercely alive. Most of these temples were created for a specific purpose, for the requirements of that local area. Whoever did this, did it very well. The technology was very good and if it had to happen in so many places, obviously it was very widespread and well-known to people. It was very humbling to see that in a tiny village, someone had consecrated something that involved a very great amount of sophistication. These were nameless yogis. No one knows who those people are. They did not write their names on the temple, and that is the beauty of it – they didn't even think it was necessary for them to leave their name. This energy that they left is all.

India is a land of many goddesses – wonderful ones, wise ones and wild ones. Find out how worship of the feminine still lives in the world in some unlikely places, and what it takes to walk with goddesses like Bhairavi, Kali & Chinnamasta. Only on Sadhguru Exclusive! Watch now. 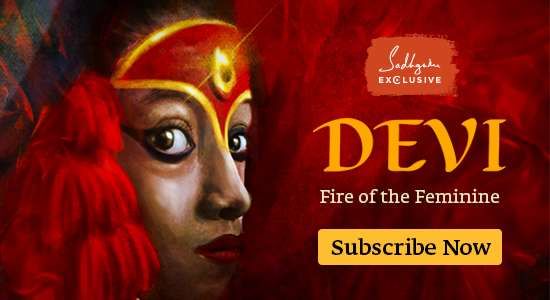 Linga Bhairavi
Feminine-Masculine
Balance
Energy
Love
Indian Culture
Wisdom
Related Content
article
God is not Reading Your Petitions
A seeker inquires about the proper way to approach temples. A temple is not a place to petition god, Sadhguru explains, but an intelligent energy space and a tool which can help a human being live in a phenomenal way.
Oct 19, 2017
article
What Is the Divine Feminine?
The Divine has been worshipped in the feminine form in every culture at some point of time. Sadhguru explains how bringing back the Divine feminine is important in today’s world.
Aug 15, 2021
article
Navratri and the Worship of the Feminine
Sadhguru explains the significance of Navratri and the three dimensions of the feminine – Durga, Lakshmi and Saraswati.
Oct 7, 2016
Close