The Baalbek temple is known to the world as a monumental two-thousand-year-old temple to Jupiter that sits atop three thousand-ton stone blocks. But is there more to this ancinet shrine that meets the eye? What if it has a completely unexpected origin?

An Isha meditator talks about her experience of visiting the Baalbek monument in Lebanon, and about her realization that this was in fact a temple constructed by yogis a long time ago.

Who Built Baalbek Temple in Lebanon?

Baalbek  is an incredible monument, standing on a hill in the Bekaa valley in Lebanon. The construction of the expansive temple was begun by the Phoenicians between three and four thousand years ago. The Greeks then added to it, followed by the Romans, and much later the Arabs. Local legend has it that the temple was originally built by people “from the East”; not much is known beyond that. I have visited the place several times and enjoyed long walks through the ruins, but it was not until my pursuit of yoga that I found revealing connections to other civilizations. 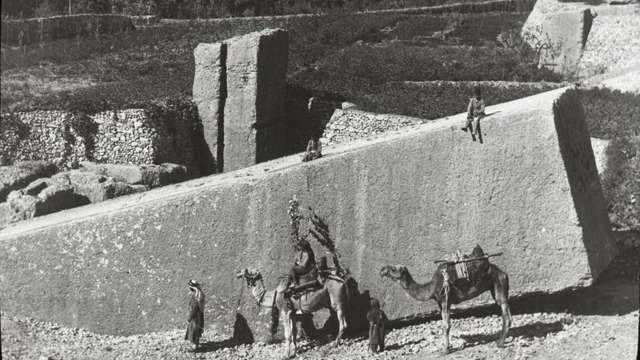 One of the large stones, similar to the ones mounted on the walls of Baalbek.

How Did They Transport Baalbek Stones?

Some curious facts about the Baalbek temple are that you will see stone lotuses carved on the temple’s ceilings. That is intriguing, because there are no lotuses in Lebanon. But when I later came to India, I saw that the lotus is the most common symbolism of spirituality here. I haven’t seen an Indian temple without one. Secondly, the foundation stones of the temple are supposed to weigh eight hundred tonnes each. The ancients transported these immense stones, and also erected huge columns, which are at least 10 feet in diameter and 50 feet high. It is said that they were moved with the help of elephants, but people don’t give much credence to this as there are no elephants in West Asia.

The lotus is the most common symbolism of spirituality in India.

All these pieces of the puzzle dramatically fell together, when I was learning to perform the traditional Guru Pooja in the ashram in India. I was told that the traditional way to honor the guru is known as Shodashopachara, or 16 ways of treating a Guru. Something called a Guru Pooja stone, a stone with 16 corners, is also used for the purpose. When I saw it, I was reminded of this large stone lying in the middle of the ruins of Baalbek and I was able to connect the dots — the lotuses, the elephants and the 16-cornered stone...

Suddenly, my coming to India did not seem so novel or original. Obviously, there was a cultural interaction going back thousands of years.

Baalbek is an incredible monument. It is something that everybody should see. Some of the stones weigh 800 tonnes. I want you to just understand – to do this without equipment, without cranes, without trucks, without any big ships, what kind of human beings would even endeavor to think like that? Definitely not people who are thinking of just money and bread.

Among the roof stones, there is a clear anahata symbol, with 6 petals and two interlocking triangles. And above all, in the museum at Baalbek, there is a stone with 16 corners called a Guru Pooja stone.

Guru Pooja is not just an emotional thing, it is a whole system of creating a certain possibility, of creating a field of energy around you so that people become receptive and are drawn to the whole process. This is called Shodashopachara, which means 16 ways of treating a Guru. For this, 16-cornered stones are made which are called Guru Pooja Peetas which are unique to yogic culture. Guru Pooja stones of 16 corners could not have gone anywhere else except from the knowledge that Adiyogi himself transmitted. Such a thing exists nowhere else on the planet, but in Baalbek there is a Guru Pooja stone that is thousands of years old. Obviously there was a very active commercial and spiritual connection between the two lands.

Truth
Yoga
Related Content
article
Creative Process and Ways to Enhance Creativity
Sadhguru defines creativity, explains where creativity comes from and gives an insight into his own creative process.
Feb 18, 2022
article
The Fire Element – 4 Types of Agni
Sadhguru shares a deeper understanding on the most fascinating of the five elements – fire! He not only explores the different forms of fire within the human system and their effects, but also cultural and even cosmic dimensions of fire.
Feb 14, 2022
article
Mahabharat Episode 74: What Does It Take to Bless or Curse Someone?
The story of Mahabharat is rife with curses and boons. Ever wondered how much energy it takes to curse someone? Is it easier to bless than to curse? Why does the potency of a curse vary, in traditional terms? Discover the answers to all these questions with Sadhguru.
Feb 8, 2022
Close