The 112-ft face of Adiyogi at Isha Yoga Center now holds the record for the largest bust on the planet by Guinness World Records. Read below why Sadhguru chose to build this 112-ft face and a sharing from an amazed volunteer who initially found the making of the 112-ft Adiyogi was beyond his mental grasp.

One of the criteria listed on the website Guinness World Records of ‘What is a 'world' record?’- is that the proposal must be something, or about something that is known to the world’s majority. It cannot be too specific/regional.

Accordingly, on May 10, Guinness World Records recognized the Face of Adiyogi.

Why did Sadhguru specifically choose to make a 112-ft statue?

Sadhguru wrote on the Sadhguru Spot post on July 20, 2016: We are planning to make Adiyogi an iconic presence in the world so that people understand that only enhancement of perception ultimately enhances life. We are in the process of building a hundred and twelve feet tall face of Adiyogi. The number is both symbolic and scientifically significant for our existence because he opened up one hundred and twelve possibilities for human beings to reach their ultimate nature, and there are one hundred and twelve chakras with which you can work. This image of Adiyogi will be the largest faces on the planet.

The idea of creating an iconic face like this is not to build one more monument but to use it as a galvanizing force to transform the world from a mass of believers to individuals who seek truth of life and beyond. You know what terrible things believers are capable of. All the conflict on the planet, though some would like to project it as good versus evil, is essentially one man’s belief versus another man’s belief. The moment you believe something, no matter what it is, you become blind to everything else. For belief systems to work, you need a flock. If you apply your own intelligence and think for yourself, your belief will collapse. The nature of seeking is individual. Every individual has to seek within himself or herself.

“It took almost two to three years before Adiyogi’s face was finalized, and once it happened, we made the first 21-foot face of Adiyogi in the next 3 months.

So when we were in the process of making the second 21-foot face in 2014, Sadhguru asked, ‘Why don’t we make 112-ft face?’ At the time, I couldn’t think how big it would be – 112 feet, it was all in words. I could linearly visualize it, but when it comes to the statue, you couldn’t imagine. So 112 feet height, then what will be the width - it will be hundred and sixty feet, and again the depth is eighty feet. It was a very huge thing for my mind to grasp at the time. When we were creating the dimensions, the nose alone came close to fourteen feet. Fourteen feet means it’s thrice my height, you know. You just imagine, three time my height is your nose, and then think of this as the whole statue. It was beyond my grasping capacity at the time.

But having the basic skeleton of the 21-ft Adiyogi was definitely one of the main reasons that we could finish the making of 112-ft face of Adiyogi in 8 months. This is perhaps the fastest anybody in the world has done something like this.” – Vikki, Ashram volunteer and Adiyogi Project Manager

Many national print and online media published the news within a couple of days it was declared by Guinness World of Records. Google it to explore! 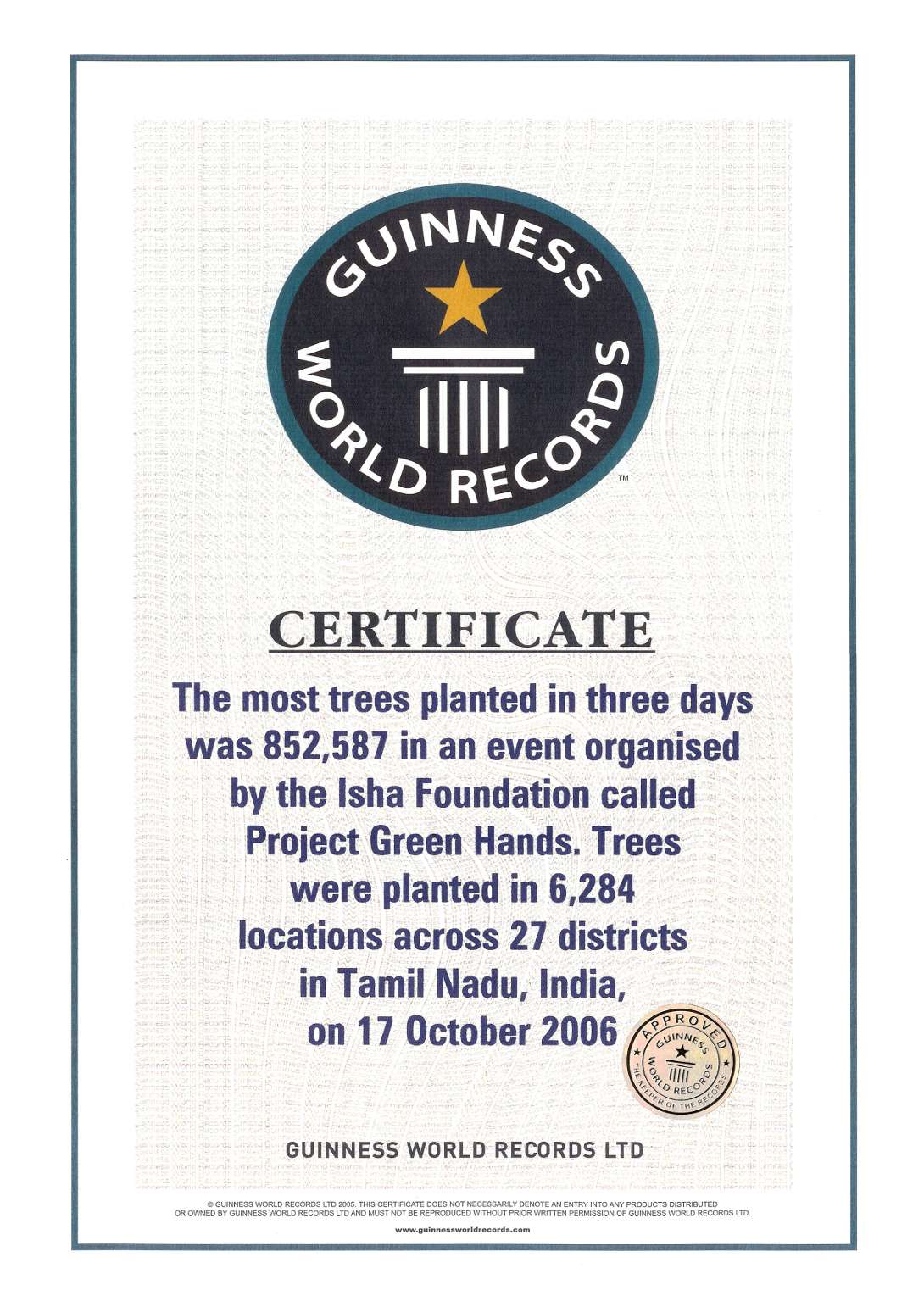 *We are happy to note that our record was broken by the Uttar Pradesh State Government, India when across 10 locations they planted 1,053,108 saplings in eight hours on 7 November 2015.