There’s a lot said about planting trees to save the environment. But that’s not the real reason you should plant trees. Here are 5 undeniably genuine reasons to make a little extra effort to plant a sapling.

There’s a whole lot being said about climate change and how planting trees can make a difference to the environment, but that’s not the real reason you should plant trees. Project GreenHands gives us 5 undeniably genuine reasons to make a little extra effort to plant a sapling.

You should plant trees so that…

…Tarzan can go back to where he belongs

Yup! It’s official. Tarzan has had to move out of the forest because he lost it to some illegal timber loggers. His little home-patch was a part of the 12-15 million hectares of forest cut down last year. That’s over an acre lost every second. Since deforestation leads to biodiversity loss, Tarzan ended up all alone after his gorillas, elephants and other mates had to vacate the jungle. Also, deforestation messed up the water cycle and led to soil erosion, so Tarzan was for all practical purposes, left high and dry – and that’s a tough task to accomplish when you don’t have a tree-top to sit on. 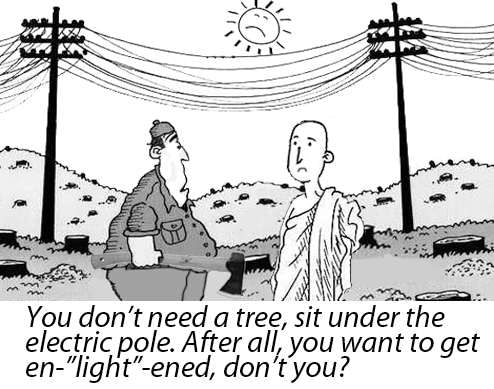 Gautama Buddha may have been enlightened in the forest, but thanks to widespread deforestation, future Buddhas will likely have to be urban yogis. In a recent press release, the President of YOGA (Yogis Of Green America), has stated that it is becoming increasingly difficult to find any trees, let alone Bodhis, in urban areas. Citing various health and economic benefits of urban greenery, including decreased flooding and heat reduction, he has appealed for an “enlightened” perspective on the problem.

Life has been tough for the fat man in the red suit lately. His gift factory output has plummeted due to real estate issues as polar ice cover in the Arctic has hit a record low – 49% lower than 1979 levels. What’s more, he’s got a labor shortage on his hands with all but one of his reindeer dying out thanks to global warming related habitat destruction. With the collapse of his business and the loss of his dear deer friends, he’s been heart-broken and has decided to quit the North Pole. He is currently in negotiations with immigration officials, trying to avoid being deported. He has requested that more trees be planted in the tropics to combat climate change.

He won’t be the sole holder of the “homeless due to climate change” title for long. The Global Mean Sea Level has risen by 4 to 8 inches over the past century, and the rise is accelerating. A recent study says the oceans may rise between 2.5 and 6.5 feet by 2100. More dire estimates push sea level rise to 23 feet, enough to submerge London and Los Angeles.

TV stations are fast replacing their weathermen with astrologers, citing hopelessly inaccurate forecasts. Climate change related extreme weather swings, and events such as the 2011 heatwave in the United States, when 9,000 temperature records were set, or the weather whiplashes that swing from droughts to floods to droughts every year have put weathermen in the hot seat (though it can be a record-setting winter outside the studio).

Newly appointed Head Astrologer (weather) at the local TV station, Mr. I.M. Cloo Les, has indicated that his team will be forecasting based on star positions in the sky. But what will they do when the skies get cloudy during unexpected thunderstorms? Mr. Cloo Les was unavailable for comment since he perished while out drawing star maps during the recent super-hurricane.

Climate scientists also warn of more extreme behavior to follow. Weathermen and astrologers agree, predicting that climate change will have a huge impact on humanity. That’s one prediction no one can disagree with.

…Bollywood stars have something nice to dance around

Apparently, Bollywood has graduated from dancing around trees to something with a little more pizazz. While some glamorous reasons have been proposed to account for this game-changing “move,” the real reason is that there aren’t many trees to be found anywhere, leading to much angst in the film industry. Former Miss Universe and Bollywood heroine Sushmita Sen has stated, “I'm essentially a Bollywood actress who loves dancing around trees…” Will we disappoint her, is the million-dollar question.

Editor’s Note: Jokes apart, climate change and the environment is serious business. We hope this post was enjoyable and inspiring enough for you to consider donating to Project GreenHands’ Tree Planting Campaign. All it takes is Rs.100 per tree (including post planting care and re-plantation for 2 years till the trees become self-sustainable). If not for yourself and your kids, do it for Tarzan, Santa and Sushmita!