Celebrations of the 14th Anniversary of Dhyanalinga Consecration

The 14th anniversary of the Dhyanalinga consecration was celebrated with chants, the release of an eBook, and a session of interfaith deliberations on the universality of religion.

The fourteenth anniversary of the consecration of the Dhyanalinga was celebrated on 23rd June at the Isha Yoga Centre, with thousands of people from various faiths visiting Dhyanalinga. The consecration celebrations including the offering of various chants at the Dhyanalinga, and a special session called Interfaith Deliberations on the “Universality of Religions.” Events of the entire day were webstreamed live. 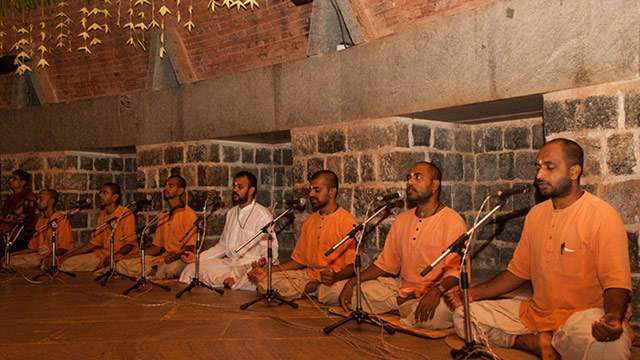 The day began with Aum Namah Shivaya chanted in the Dhyanalinga at 6AM in the morning and ended with Guru Pooja at 6:45PM in the evening. Sikhs offered Gurubani chants, Christian priests offered Chrisitian chants, Lebanese singers sang Muslim and Sufi chants, and Hindu scholars sang Vedic chants. The Dhyanalinga was open till 1AM after midnight for devotees to meditate. Special guests performed for the Nada Aradhana – an offering of sound. The evening included a grand procession of Linga Bhairavi Devi’s Utsava Murti and a Maha Arati in front of the Dhyanalinga.

Sadhguru concluded the event with his talk and said that all our differences come only from our beliefs and opinions. In actuality, there are no differences. He mentioned that even modern science says that the universe is just one energy manifesting in different ways. “When one experientially sees this, we say he is in yoga,” he said. He spoke of the importance of moving from dogma and beliefs, to experience. “The divine should not be an aspiration, it should be your companion,” he said.

Dhyanalinga
Related Content
article
Navratri - All About the Festival, Traditions, Sadhana, Quotes and More
Navratri is a celebration of the divine feminine that is replete with rich traditions like golu and dandia, elaborate rituals of worshipping Devi, and powerful sadhana that one can use for their spiritual growth.
Mar 12, 2022