In this Spot, Sadhguru shares his perspective on how future technologies will reshape our lives. Check out the video with transcript, and scroll through the photos from Sadhguru’s eventful past week in Russia. The talk is excerpted from the session “Forecast-2100 Technologies of the Future?” at the St. Petersburg International Economic Forum (SPIEF) on 25 May 2018.

Anything that can be built by storage of memory, access to memory, analysis of this memory, and expression of this memory, everything that you are doing through your intellect, thinking that is you, can be done by a machine at some point. But there is another dimension of intelligence within the human being which we refer to as chitta. Chitta is a dimension of intelligence where there is not an iota of memory. It is unsullied by memory. Memory is what has made you everything that you are. You have a human form – this is evolutionary memory. You have varieties of other memories – that’s what makes you a certain kind of person, and so many other things that you are. Your professions, your capabilities, your knowledge – everything is because of memory. But memory is also a defining boundary. The moment you identify with your memory, you say, “Oh, this is my friend. This one, I do not know. This is a person I like. This is a person I don’t like.” This is all memory.

Memory fixes a definition and a defined boundary to your life. It is just a question of memory that I know, “this is me” and “this is you.” But there is a dimension of intelligence which we call chitta, or in modern terminology, loosely, it can be called consciousness. Being conscious as you and me are right now is wakefulness, not consciousness. So, this dimension of intelligence has no memory in it. Where there is no memory, there are no boundaries to it. Right now, ninety percent or more of humanity lives by their physiological and intellectual capabilities. These things can be built at some point, and made to look very real.

So, once machines start doing this, it is inevitable for you to explore the deeper dimensions of who you are. Maybe five hundred years ago, if you want to be a big man in the place, in your town, you had to have big muscles. But now if you have big muscles, we will give you a menial job. We don’t recognize you. One reason why women have a reasonably equal space on the planet today is because of technology, because the power of the muscle has been neutralized. How much brain power do you have? How much intellectual power you have is deciding things right now. But if intellectual power is taken by the machines, naturally human beings will dig deeper into their consciousness. A machine cannot dig deeper.

Everything that you can do, a machine can do in future. And that will be a great day, because that means we are on a holiday. We don’t work for a living. Now we look at life in a completely different way, which will be very, very significant. In fact, for the first time, we will become human beings! We must understand why we are called human beings; that means we are the only creatures on the planet who know how to be. Without a social atmosphere, many of you will not know how to survive. A bug knows how to survive far better than you, because he is just focused on his survival. But a bug will not know how to be conscious. You can definitely build a bug. It’s very interesting that today in the computer technologies, we are using these words – “that’s a bug; it’s a virus.”

Definitely, the dangers of this are also there, as the dangers of machines are there even today. For example, automobiles are killing more people than wars every year. But we’ve accepted that as collateral damage. We’re travelling faster, so some people will die. We have come to terms with that. So, similarly, maybe we’ll have Nano soldiers. Soldiers won’t be human beings going and fighting. We sit here and let loose on other people. These things will be terrible, but even now it’s terrible. You can just press a switch here and destroy a whole city somewhere else. As these capabilities are coming, we must also strive to upgrade the human beings to move beyond the limitations of their intellect and come to a deeper dimension of intelligence which is life itself, the very source of life itself within us.

If anything needs to happen, a certain amount of human energy, time, and resource has to be dedicated to it. So, we have to invest in consciousness. Till now, we have been investing only in our survival. But once the technologies that they are talking about are becoming a reality, survival will not even be an issue. When survival is not an issue, we will definitely start investing. But the sooner we invest, with less aberration, we can move into these new possibilities. It’s always a double-edged sword. Which way you are going to use it depends on who you are. Whether your identity and your experience are very exclusive, or your identity and experience are very inclusive, will determine in which way the sword will swing.

It is time we make that voice, which refers to a dimensionless, a boundary-less consciousness, heard, and methodologies as to how to become conscious . As there are technologies to create wellbeing in our surroundings, there is a science and technology to do the same within us. This is not only today’s thing – this has always been there. It’s as old as humanity, but in some generations, it is heard loudly; in some generations, it sinks. And accordingly, human wellbeing rises and sinks. With any amount of technology, if you don’t know how to be, you still are not well.

Look at our state right now. As a generation of people, we know more comfort and convenience than any generation ever knew in the history of humanity. But can you claim you are the most joyful and fantastic generation ever? No! People are becoming neurotic. I am not saying that we are worse than other generations, but we are not significantly better, for the amount of toll we have taken on every other life to have what we want to have. Your technologies will bring comfort and convenience but will not bring wellbeing. It’s time to focus on that , because already, we are at a place where technology is going through the ceiling – we are not matching up. Right now, your wellbeing is still determined by what’s around you, not what’s within you.

If you walk in this city, I am sure there are hospitals, there are schools, there are toilets, and there is everything. But do you have a place for people to meditate? There is no such thing. Eastern societies invested heavily in the past in that direction. But today, they are also emulating the West and trying to compete with them, losing out on this. But the need for inner wellbeing will become very strong in the next twenty to twenty-five years. When technology starts doing most of the things that you are doing, and you don’t know why you exist, then the need for wellbeing becomes super strong. So if we want to be ready for that day, it’s very important that we invest both physical infrastructure and human infrastructure which focuses on the innermost core of who we are. 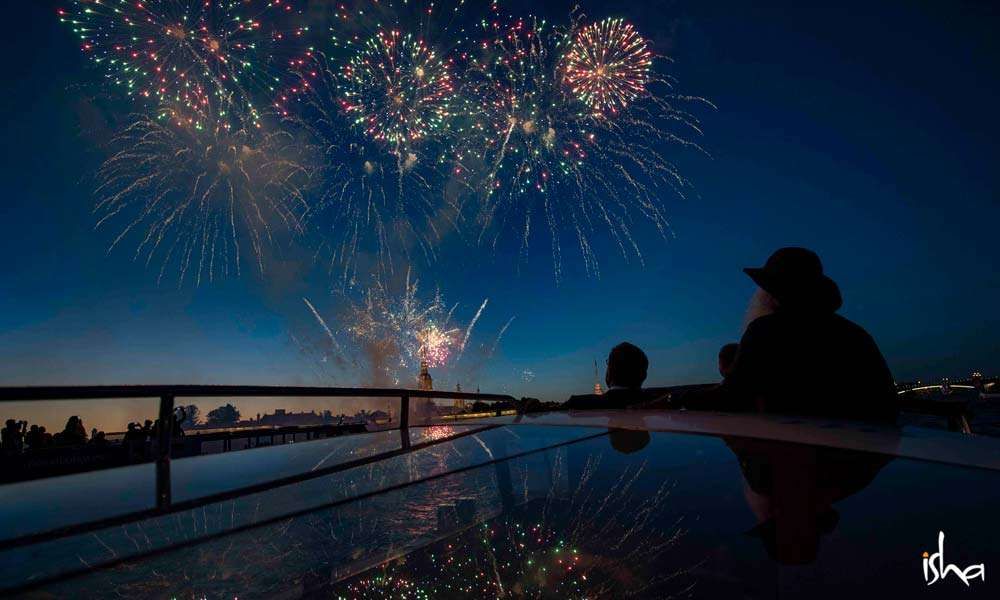 Sadhguru sharing his perspective on the future of humanity

Sadhguru swamped by attention from the Russian media

From Ambition to Vision – another SPIEF session with Sadhguru

Launching the Russian edition of the Inner Engineering book

Signing copies of the new Inner Engineering book in Russian

A quick game of chess

Back from a speedy boat ride with Sadhguru at the helm

Stepping into the joy of self-propelled mobility

Taking a spin on the Palace Square, St. Petersburg

A boat restaurant near the Hermitage, St. Petersburg

The Palace Bridge opens the way

Standing up for the Stop Plastic Suffocation campaign

Language is no barrier to communication

An evening stroll in the heart of Moscow

Conscious Planet – Three Billion for One Planet | Sadhguru Spot
In this Spot video, Sadhguru introduces Conscious Planet, an initiative to create a world where a large number of human beings act consciously, and where communities and governments take more responsible environmental action. To really create an impact, Sadhguru says, “We want to get three billion people on board.”
Mar 1, 2020
sadhguru spot

Living Death
In the latest Spot, Sadhguru welcomes the new year with an important reminder to become more intimate with life’s only certainty – death. We’ve grown used to perceiving death as a horrible thing, but Sadhguru explains that like inhalation and exhalation, we must embrace both, life and death. He guides you how to make the right choices and how to sparkle in your existence. Through an embodiment of “living death,” you create a different possibility for how to spend your time on this planet.
Jan 10, 2020
sadhguru spot

From Magic to Mysticism
In this video, travel with Sadhguru to Madison Square Garden, New York, for the Mystic Eye program, and University of Toronto for the latest edition of Youth And Truth. Sadhguru then heads to the UN Convention to Combat Desertification in Bonn, Germany, and finally returns to iii in Tennessee, for the Linga Bhairavi Yantra Ceremony.
Dec 27, 2019
Close