Sadhguru returned to center stage at the World Economic Forum (WEF) after a decade on February 22.The summit was special as it was the fiftieth anniversary, and Sadhguru got a personal invitation from the founder of World Economic Forum, Klaus Schwab. Here, Sadhguru championed the 1 Trillion Trees Platform, a major new initiative led by the United Nations Environment Program (UNEP) and the UN Food and Agriculture Organization (FAO). The goal of the initiative is to plant 1 trillion trees by 2030.

With a track record of astounding success in mobilizing 162 million people to vote for an ecological change during the Rally for Rivers campaign, and having meticulously developed a sustainable agroforestry model over 15 years which has transformed the lives of nearly 70,000 farmers, Sadhguru emerged as a powerful voice in making this initiative become a reality. And Cauvery Calling was also upheld as a compelling model for the tropical world to replicate. 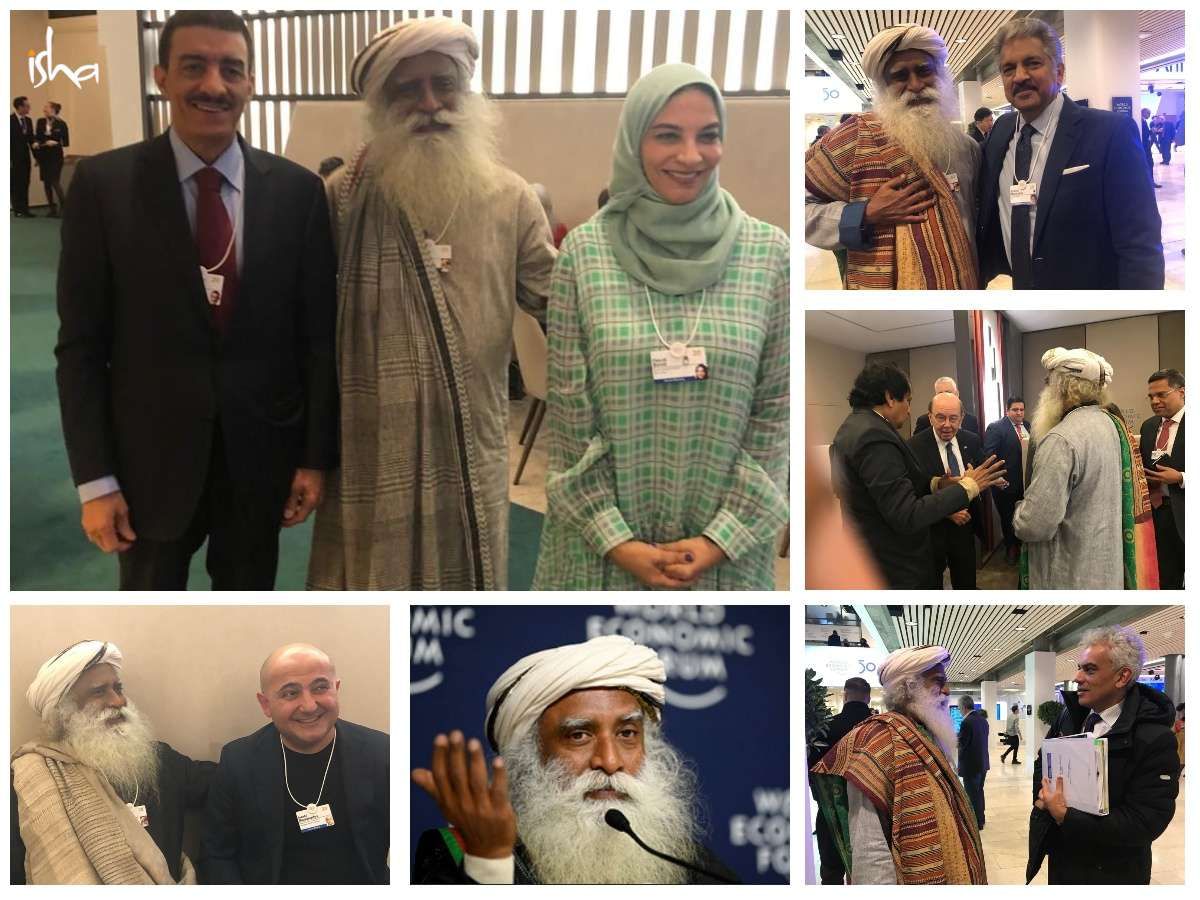 #1 What is the Significance of World Economic Forum 2020?

Sadhguru: “This particular year the focus has been eminently on ecology, which is very significant at a time like this. Because if policy makers and business leaders don’t participate in that process - if economic forces don’t participate in ecological restoration - there will never be success, only talk. Activist talking and protesting on the street side is not going to change a thing. Business leaders, businesses, governments have to think differently. In that sense I think it is making a huge difference. This time we have launched this one trillion trees initiative. People should understand one trillion is just an inspiring number, it is not an absolute. It is something to aspire for to bring a large part of the world under green cover. Without an inspiring idea you can’t get people behind it. So that is being done. Right now good teams are being formed, and I am also very much part of it. So let’s see how to take this ahead.”

#2 How do you feel when you see what’s happening to the planet?

Sadhguru: “Well we can sit and cry, but if we do the right things we can turn it around in this generation. That's what we are looking at.”

Questioner: What are the right things?

Sadhguru: “Everybody is talking about carbon in the air and stuff . Yes, all those things are important, but the most important thing is restoring soil. If soil has vitality and is healthy, life can bounce back any time. But if we deplete the soil - which we are doing at a tremendous pace - well, some scientific studies are saying we have topsoil only for the next sixty harvests, that means approximately forty-five years. So that is the level of degradation that has happened to the soil. If we don't revive the soil by putting back substantial organic content, which can only come from the leaves from the trees and animal waste, we are definitely looking at something very dark.”

#3 To preserve the ecology, what changes do individuals need to bring in their behavior?

Sadhguru: “We are on a short window; we have to do something drastic in the next ten to twenty five years. Otherwise what we will face will not be pleasant. Especially poorer nations, tropical nations like India and Bangladesh, and African nations will suffer immensely. Richer temperate climates may manage. And every one of those nations will have to build walls because people will migrate in a huge way that you cannot control. You understand? You will have to use armies to shoot down people, that’s what it will come to. “So it is best that everybody invests, not only those poorer, tropical nations. Nations who are financially competent must invest because we are investing in the planet. This is the right time for us to think beyond national borders and identities and invest in the future of this planet, in future of humanity. It is very important. And small changes - you use a little less water when brushing your teeth or you did this and that for your satisfaction - are not a solution. For a solution to happen, policy must change, government machinery must be behind it, large budgets should be allocated for this.”

#4 How to make governments invest in long-term ecological solutions?

Sadhguru: “We want to make at least three billion people conscious about ecology. So we are working with UN agencies. Right now the material that is out there about the ecological crisis is all PhD material; most people cannot make head or tail out of it. You read the UN document which runs into hundreds of pages - after weeks of reading, you don’t know where it started and where it ended. Not that there is anything wrong with it, but most human beings don’t have the intelligence to perceive this kind of complex process. So I am looking at how to articulate what needs to happen in different parts of the world, in equatorial, topical regions, subtropical, temperate regions. We want to reduce it to this level of simplicity - five things that must happen in your country. Everybody who lives in that country, the men, women and children who walk on the street, must know these are the five things that must happen. If they are happening they should know that the right things are happening. And they should know the two or three things that should never happen in their country. If it is happening they should know that this should not be happening. This plan will unfold between 2020 and 2021.”

#5 Will the fourth industrial revolution technology help us tackle challenges like climate change?

Sadhguru: “See technology is a wonderful instrument, but it is a double-edged sword. Who is holding the sword determines whether it makes life or destroys life. So we can go on coming up with more and more technology. Yes, they are wonderful tools, but if you do not transform the hands which hold these tools, then every technology could work against us.”

#6 How to create a fair world for everybody, equal opportunities to everyone?

Sadhguru: “Well, the WEF has become a prime platform on the planet today, where business leaders, policy makers and social influencers are all participating. Definitely this attempt to create a wider base for the economic growth in the world is very important. As everybody knows, today the verticals of economy are too small, too narrow, standing on the shoulders of just a few people. It needs to spread for its own stability and, above all, for the larger wellbeing of humanity. If this equal opportunity has to come, there are many areas of the world which are considered impoverished, where nobody wants to invest.

So if we have softer, easier money, which can be invested with longer gestation periods, this massive problem of migration that we are facing can be avoided. Right now it is estimated in the next decade there could be a migration of 1.6 billion people. Why would people want to leave their homes and go somewhere? Simply because there is no livelihood and economic opportunity. If policy makers can provide the necessary incentives to invest in impoverished areas, providing softer and gentler credit and other facilities, businesses can invest in areas where the returns are not necessarily quick, but will be a more humane and compassionate way of running our economy. This is very needed, and I hope that the World Economic Forum will play a significant role in making this happen.”

#7 Is Sadhguru building bridges between East and West?

Interviewer: Many years ago there was another spiritual leader from India who was probably one of the first people considered to be building bridges between East and West, and we are celebrating that. So, I think you are continuing the tradition of translating between different traditions and cultures. What do you see as the role of spiritual leaders such as yourself in solving or creating the conditions for dialogue?

Sadhguru: “See my work is not about linking cultures as such. My work is about raising human consciousness. Only in our bodies we have race, ethnicity, cultural differences and all this stuff . In our minds we have all kinds of nonsense, but in our consciousness there is no such thing. Life is just life. So, the raising of consciousness is naturally inclusive. Inclusiveness is different from building bridges. Bridges means you and me are still separate but we got some arrangement. This is about experiencing life as one. This is what Yoga means - everything has become one in your experience. So I am a yogi, the idea is to bring Yoga to people - the experience of Yoga , not twisting and turning yoga. To bring the inclusive nature of our existence. So, I don't see it as bridges. You can bridge two pieces of land, but you cannot bridge the space, isn't it? Your consciousness is like an endless space. There are no bridges there.”

# 8 How do we build a global identity? What kind of system change needs to happen?

Sadhguru: “One important thing we need to do is, in our schools along with our national anthems, we must have a global anthem to sing. Children should grow up understanding they are a part of this planet, and a piece of the planet which we call as a nation cannot exist by itself. We are part of this planet, we are part of a global happening; life happens here as one, it cannot be separated. This must be understood by every child that's growing up in this world. Adults also need to know, of course, but many adults have crossed a certain point in their life. So it's extremely important that the next generation comes to an understanding and a larger identity which is beyond the limitations of tribe, clan, nationality, race and religion. Just having a human identity also is not enough anymore; our identity should be with every life on this planet otherwise we will not survive.

Editor’s Note: Sadhguru also conducted three morning meditation sessions and a half-day Consciousness Retreat for WEF participants. The world’s most influential leaders in politics, business, academia, and global organizations were in attendance.The people that Sadhguru met and who came to greet him are more than just “diverse”: Indian political leaders like Rajya Sabha MP, Suresh Prabhu and Karnataka CM, YS Yediyurappa, to global leaders like Wilbur Ross, the US Secretary for Commerce, and the President of Colombia Iván Duque interacted with him. There were delegates from Pakistan and Azerbaijan who wanted a photo with Sadhguru, proving that the spiritual thirst of the world knows no borders.

Click here to have a panoramic view of Sadhguru’s visit.